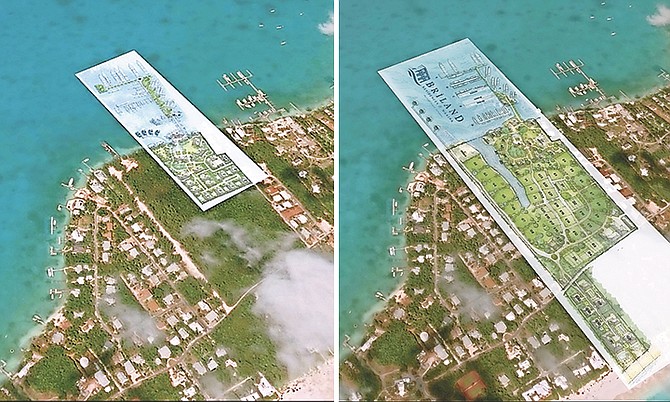 EXPANSION PLANS: The initial footprint, on the left, and the land the planned development covers now.

A HARBOUR Island development is set to become five times larger than initially planned and is sparking outrage from high profile guests and some locals on the island.

If the expansion plans are approved, the development will expand across the width of the island, driving fears that the pristine environment and quaint charm of the community will be eroded.

As scrutiny intensifies, focus has started to centre on the development's project manager, Bernard Ross, an American who was convicted of drug-related crimes in the 1970s and served 11 months in prison.

Celebrity Lenny Kravitz, star of the Ministry of Tourism’s recent promotional campaign for the Bahamas, appears to be among those concerned.

“We must respect and preserve Eleuthera and the rest of our islands,” the singer, who has a home on Eleuthera, wrote this month under an Instagram post criticising the advertised expansions. “When we destroy it, we won’t get a second chance.”

The project has raised transparency concerns: work began on a marina even though the heads of agreement and an environment impact assessment have not been publicly released. The Tribune obtained the EIA and the environment management plan from the developer yesterday.

A government official said the heads of agreement will be tabled in the House of Assembly soon. Prime Minister Dr Hubert Minnis promised the release of the document more than a year ago, but never followed through.

According to audio heard by The Tribune, a project representative said during the meeting: “This project is a stand alone project which seeks to develop five acres of land with a boutique hotel, marina and cottages.”

The Bahamas Environment Science Technology (BEST) Commission approved the developer’s EIA and EMP on December 11, 2017 and the heads of agreement was signed on March 14, 2018. It was during the signing event that Dr Minnis pledged to table the heads of agreement the next time he spoke in the House of Assembly. It is not clear why he did not do so.

In November 2018, the NEC approved-in-principle the developer’s acquisition of a further 21.4 acres of land and an expanded marina resort comprising “a waterfront restaurant, a gourmet food store, retail stores, restaurants and spa facilities, cottages, villas and suit [and four] over-the-water bungalows, subject to meeting the requirements.”

Even though work has only started on the originally acquired 5.6 acres of land, some Harbour Island residents are irked that the developer has advertised a massively expanded project absent of official approvals or further consultation with residents through town-hall meetings.

Ben Simmons, a Harbour Island resident and a chief critic of the project, said yesterday: “The entire expansion process, the fact that they started advertising this without going through the entire town hall process is indicative of their mandate here, which is that our community is irrelevant. At best it's false advertising. It’s disingenuous and presumptuous. I’m a hotelier and I’m hoping to add another 20 rooms to our project but I don’t go around telling people I’m a 26-room hotel when I’m a six-room hotel.”

Michael Wiener, the project's developer, said in a statement to The Tribune that officials felt comfortable advertising the expanded project because of the approvals it has already secured.

“We are fully aware that there is a process regarding approvals,” he said. “So far, we have received BIA and NEC approval, subject to satisfying conditions which we are pursuing. First is the supplement to the EIA. Once completed, we will have a town hall meeting. Aside from following that protocol, we have interacted with the town council who support the plan as it relates to the expanded project. With those approvals so far received, and the questions that have arisen regarding the development, we have begun to inform the public about what we plan to offer via our website.”

The project is the latest to pit a developer against those who believe big developments threaten the charm of Family Islands.

Mr Simmons has diligently chronicled his concerns with the project on his Instagram account, Ocean View Club, often generating hundreds of likes and responses from angry followers.

“This is going to fundamentally change the feeling and experience of Harbour Island and its product,” Mr Simmons said. “I grew up here for 35 years. There’s something to be said for keeping it small and keeping it beautiful because that’s becoming rarer and rarer. The more you try to engage a product that everyone else is trying to emulate, the less special that will be. This project is cookie cutter, big tourism for big boats and that’s the complete opposite of what it means to be a small Family Island island.

"The number of people that have contacted me and made comments are in the thousands. They've said, 'this is the tipping point for Harbour Island.' They say this thing fundamentally changes what it means to them and the reason they choose to come here. I know people who have been living on the island for 20 years, longstanding members of the community and yes they are expats, but they are a valuable part of the economy who are saying 'I never thought of an out but now I'm considering it.' That development will fundamentally change the experience of Harbour Island."

“It’s my goal to create a jobs training programme for locals so that young Bahamians have an opportunity to support themselves on the island without having to leave in search of other opportunities,” he said during last year's heads of agreement signing.

He added yesterday: “To preserve the aesthetic of Harbour Island we have successfully lowered our density footprint by more than 43 percent from 40 units on 5.6 acres, to 83 proposed units on 27 acres (roughly three buildings per acre versus the previously designed seven). This was done all in an effort to maintain the ecological and cultural sensitivity of the island.”

“To be honest,” he said, “the only people that we’re really hearing complaints from are maybe a few persons that are not directly from the community or involved in the community. Right now the developer just purchased the property. They haven’t finalised any plans for any of the stuff people complaining about.”

However, Mr Davis said at least one element of Mr Wiener's plan will likely be rejected: the construction of a canal.

“I know for sure something like that will never be passed,” Mr Davis said. “That’s an environmental disaster. I don’t think that will be allowed.”

Asked about the canal, Mr Wiener said: “Central government has seen the canal [proposal]. The feedback received was to have a town hall meeting and if the local population supports and BEST does not object, we would have its support. Until then, no construction will take place on the canal.”

You only have to know who sits on The National Economic Council (NEC) and serves on The Bahamas Environment Science Technology (BEST) Commission to explain and understand the root cause of the disastrous and outrageous decision making around many of the foreign owned projects in the pipeline today. What a joke! LMAO

Sheep you know you can't name names in the Bahamas due to our overly strong liebull laws.

Under the PLP the developers plan to just expand would certainly have worked. But now we have a responsible government in place who will ensure that this project is done according to the approvals received.

Why can anyone not see that Briland has reached its realistic maximum carrying capacity????

There are other islands starving for investment ........ that little congested rock is FULL.

"Celebrity Lenny Kravitz, star of the Ministry of Tourism’s recent promotional campaign for the Bahamas, appears to be among those concerned."

"We must respect and preserve Eleuthera and the rest of our islands,” the singer, who has a home on Eleuthera, wrote this month under an Instagram post criticising the advertised expansions. “When we destroy it, we won’t get a second chance."

Good for you Lenny. I remember watching his documentary with him walking the road in the Eleuthera, mixjng eith the local people, cuz he is one of us, sitting on the beach and speaking of the serenity. I really wonder how that big cruise ship will change that aspect of the island. Sometimes we give away the most valuable thing we have "peace andv ranquility"

Greedy foreign investors plus greedy local politicians (together with short-sighted locals) equals the end of The Bahamas as we know it. Why don't they try Andros next to the AUTEC facility. Lots of room there! That would be a match made in you know where!

Sounds like the developer has already greased all of the palms that needed lubrication - what a crock from the Local Gov't no one is objecting ...... no one is speaking to you because they know it's a waste of time as you are already a bought and paid for britch!!! Nothing Boutique at this except for all the Boots they are going to have to get on the ground to build it.... when you bring (200) boongatuffies to tote blocks from Nassau there's no impact at all....

As a 50 year visitor and former homeowner on Harbour Island, my family is devastated by the news of this terribly disruptive and selfish proposed development. Indeed the charm and character of one of the country’s crown jewels will be forever tarnished. The clear deception and suspicious pedigree of the developers should cause grave concern for Brilanders and all Bahamians. Generations of Bahamians and international visitors have proudly contributed in making the Bahamas a world class destination — it would be shameful to allow centuries of hard work, dedication, and true love in building such an admired community to be torn apart by a disengenupus, commercial project on Harbour Island.
Moreover, beware of the advertised economic benefits to the island — it has never been healthier and needs a 25-acre+, 83 villa, environmentally catastrophic “canal” like a hole in the head. Listen to Bahamian Lenny Kravitz - he speaks from the heart.

Briland has lost its physical charm for some time now .......... its living on its legacy ........... Greedy foreigners, unconcerned locals, and nasty immigrants have done a lot of damage to Briland over the past 30 years.

Another greedy American chipping away at BRI. Oink, oink..stay in Beverly Hills with the Juvaderm-ridden Jenners.