Are Cabinet Women Respected? No 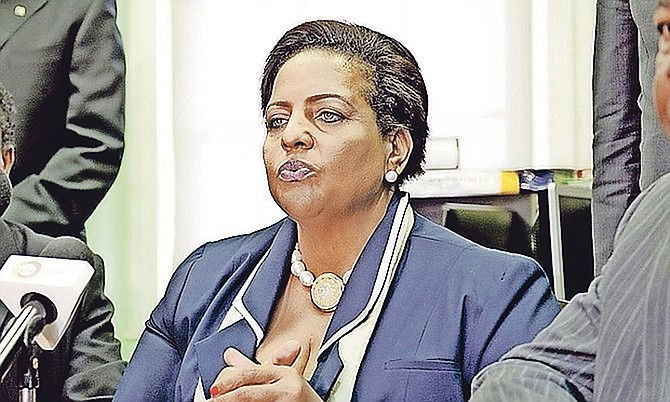 FORMER official opposition leader Loretta Butler-Turner has insisted that regardless of what female politicians bring to the table they aren’t respected by men who have dominated the political arena.

In a rare public appearance as a guest on a television show where she discussed the state of politics in the country, Mrs Butler Turner further pinpointed how political parties may not encourage the inclusion of female candidates.

Asked if women are respected at the Cabinet level, the former minister said: “No, absolutely not.

“If it’s a man whether he can articulate or not we rather have him than her,” the former Long Island MP said Monday night as a guest on Beyond the Headlines with host Clint Watson.

It is something that she’s both experienced and seen happen to other women.

While she misses front-line politics, Mrs Butler-Turner said she does not see herself re-entering the political arena.

However, the former State Social Services Minister said she’d like to carry on in a capacity of mentorship and educating prospective women politicians.

From her view, seeing increased female presence came down to making politics attractive to women and them receiving the same treatment is their male counterparts.

“We have more than 50 percent women that make up our general population and we have less than 10 percent representation in Parliament and even less than that around the Cabinet table.

“…There is no direct correlation between our population and representation in Parliament and even less so around the Cabinet table.”

“You can legislate it but at the end of the day you know you just don’t want to have women there just to make up numbers so a lot of countries just shy away from quotas,” Mrs Butler-Turner also said when asked her views on whether legislating the issue would improve the number of women in politics.

“I think that what you really need to do once again is to make it approachable for women. The first thing that your have to understand is that most of the financial backing in political parties they give it to men and that is essentially what happens.

“I remember my very last campaign as an FNM, I did not receive one penny and that was under the Ingraham administration, but of course you know you got the collateral material, but not one penny.”

Forget Parliament, if women in The Bahamas were respected, they would have equal rights.

Bahamian women make up the majority of heads of households, mainstream church membership, civil servants and critical health & education sectors ........ But they are not proportionally represented in senior management or national leadership sectors.

Is that as a result of a party glass ceiling, bad advisors, cultural sexism, self-funding, or the dog-eat-dog nature of our predatory politics ......... or a combo of all?

The recent behaviour of LBT makes her a bad example for women politicians to follow ....... just like Gravy Davis and the PLP. She has NO one to blame but herself.

LBT was forced on Long Islanders by Hubert Ingraham in 2012, but she was given a chance to be an FNM MP ............ The locals accepted her and LBT was well set to be the DPM right now ........ but "the Devil" made her do some really stupid things after 2012 that turned off the majority of mainstream FNM and swing voters in Long Island ........ Hence, she is in the political wilderness today (her fault).

Could it be comrade sister's sexes had something do with not identifying former official opposition leader Loretta, as former leader red shirts party, yes, no ..

Comrade Sheepie, former PM Papa Hubert is doing just fine in he retirement away having show he hand in active politics, yes, no ... .
A retirement portrait Papa's daily activities, be's mostly spent between he multiple visits required to the post office mailbox to collect he series PopulacesPurse's pension, navigating colony's blue waters as he captain's he little fisherman's dingy, enjoying bowl boiled fish with he personally designated circle old cronies - along giving, for the asking, advice to any country's best way monitor they elections, yes, no ....
Gotta love Papa to want hug him - the man's still knows how hitch free airfare rides, going back that free ride aboard that billionaire's luxury 12-seater helicopter, yes, no .... Can't just make this up that even Papa get's pisse# off when he serious pension cheques don't arrive on the dates month likes government promises .......

Women are respected if they are women of substance, but not the same substance as in a Large Buttered Tart. I mean substance like the brain substance of Dr. Gail Saunders, Nicole Bethel, Dr. Olivia Saunders and dems. Not the pneumatic lipids and triglycerides and all mouth kinds like LBT.

All women ought to be respected and this is whether or not they are women of substance as described by your standard of "brain substance".

Being a 'man' is not a gender assigned quality. It is gender-less evolutionary arrival in ones' humanity - intellectually and spiritually. I can see from your above expression that you have not yet arrived at the mature place of a 'man'. A man is expected to supplement the deficiencies of a woman and not to lambaste her about it...

Loretta Butler Turner is spot on with her analysis!

Stop and think nah! LBT makes soooooo little sense here orga! For example, woman make up the larges sector group in every other place in the Bahamas where they can "work" for their position. . .but politics is a different kettle of fish dem! In politics nobody can "just place ya or ya work for becoming an MP". . .WHICH IS FIRST REQUIRED BEFORE YA CAN GO IN CABINET. . .SO IF LIL BIT ER WOMANS DEM "RUN". . .THEN ONLY A LIL BIT OF DEM CAN BE ELECTED!!

THE LOGICAL CONCLUSION OF HER RANT IS THAT "WOMEN DEM" MUST BE PLACED IN HOA. . .ERGO CABINET SANS THE ELECTION PROCESS??? Take for instance, of all the school leaderships, civil servants, banks etc. in this nation, women are more than men by far!!

How many men PS we have in the government leadership? Two? This same LBT shows why "not just any woman" should be placed in a place of leadership. . .because they wear a skirt!! Heck, women lead men in UB as well. . .they lead men in everything in this nation. . .but in "putting up" theysef for elections!!

Loretta murdered her political career....sad as she had alot to offer....learn to wait on God...

She is just basically "NOT A SMART WOMAN". . .there are plenty smart women in this country. . .LBT IS JUST NOT ONE OF EM. . .PERIOD!!!

She would have made a much better PM than the empty suit we have now.....

Although appointing Rodney to the Senate was incredibly stupid.... Gotta say....

I rest my case!! He whole behavior shows unsuitability for that high office! Case in point. . .a few days before the election she "cussed out" HAI on radio because he supported doc rather her. . .she had a public meltdown!!