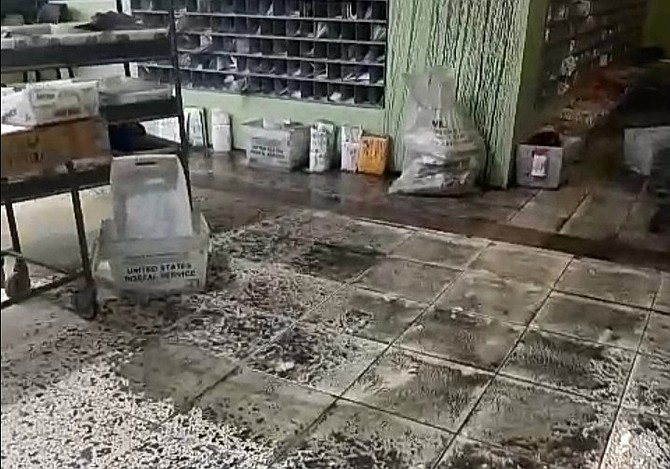 The scene at the Post Office after the incident. 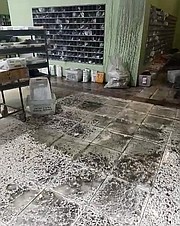 TRANSPORT Minister Renward Wells said yesterday that operations at the Post Office continued with minimal impact after a broken valve caused mail and employees to be showered with water.

In a statement, officials from the Ministry of Transport and Local Government said at 9.45am a fault in the pipeline of the newly upgraded fire prevention system resulted in water being released in the mail sorting area of the General Post Office (GPO) at Town Centre Mall.

“Prior to the GPO occupying the premises, the sprinkler system was successfully tested for adequacy and integrity,” the statement said. “Subsequent to that test, it was determined even though the existing system was acceptable, a more modern and reliable sprinkler system was desirable. With the new installation, the contractor today advised that, upon conducting hydrostatic tests, the pressure caused the two pipes to separate at its coupling,”

The breach did result in water damage to a limited amount of mail and wet some of the employees.

“The pressure valve was immediately shut down. The landlord and contractor worked fastidiously to repair the fault and the integrity of the system has now been assured. The affected mail has been dried."

“It is critical to note that members of the public whose mail has been affected are being notified individually. At inspection, there is superficial damage to the packaging of items; however, it is unlikely that contents have been damaged.”

The statement noted the facility was functioning with little impact to operations.

Bahamas Public Services Union president Kimsley Ferguson said his main concern was "why they chose to test the line while persons were in the work environment?"

Mr Ferguson, in an interview with reporters inside the Post Office, said: “The only concern that we have moving forward is that the lines that represent the fire extinguishers are going to be operational in the event that there is some sort of fire. We are satisfied that all is well.

“No one was injured, and we are satisfied that the situation is going to be corrected. When I went into the back, I saw some persons wiping down the walls and other persons that were painting to remove the stains from the substance or the water that would have come from the pipes and so that since has been rectified.”

He added: “I would have advised if there is going to be any testing that it’s done while persons are not at work to minimise any chance of anyone being injured. I asked one of the maintenance persons whether or not (the water) was sewerage and he advised that is was not sewerage. However, there was a concern that the water coming from the extinguishers are so black, so I don’t know but I didn’t smell a stench coming from anything I saw in the back.”

Mr Ferguson said he intends to get an update from management about “aspects of this operation that have not been fully completed” to ensure the occupancy certificate is “covering everything".

In the nine-second clip, envelopes can be seen seen wet in a bin on the floor, dark water is seen on the floor and on the walls of the mail sorting room.

A video of the incident's aftermath went viral across social media yesterday, attracting dozens of responses and reactions.

One Facebook user said: “What a shame omg praise the lord no one got hurt. Dr Minnis need to go back and deal with patience the hospital is in need of him…he really can't run this country so sorry to say.”

Another Facebook user said: “So no one decided to inspect the roof for this “new” post office?”

Said another user: “Wow this administration can't get anything right.”

Now the mail will have mould, oh boy!!!

"Flooding already at new Post Office." Ma comrades, what is the value PopulacesPurse's $70 millions not going get workers at Post Office these Imperialists red shirts first 815 days governing days .... Yep, pipes that are not done bursting over heads workers .... At least water pipes at the former Phil's Food Services building, couldn't have failed any worst if put under water pressure test ....

Can these people do nothing right? Hydrostatic testing after occupancy? How would we ever know what mail got soaked? Wait and see what bills etc don't show up?

I agree 99%, the little I disagree with is the foreign investor part. And while we know they take profits away, the do spend a lot and that helps. The real shame is that local wealth refuses to commit to much in the free markets, ie hotels and high end development. They seem to wait until they can rig a gig backed by government and sometime monopoly status.

On our current path, we are doomed!

number 4 and 5 are not factual , we ran the hotels before it was a f,,,king disaster , we cant even keep the lights on ,,the PLP set the tax rates the FNM is trying to raise them ..And the alternative is the PLP .I live in reality we have 2 choices FNM or PLP . If we get a third party they may be worse , these people came from us they represent our mores , values , integrity or lack of and ability . .

@concernedcitizen: If you truly believe what you say in your last sentence, then why even bother showing up at the polling station to vote come election day? What you in fact choose to believe is the false notion that voters only have a choice of two evil political parties and that the FNM will always be more evil than the PLP. The Minnis-led FNM cabinet takes great comfort in knowing there are many voters like you who are willing to overlook both their inability to govern and their corrupt shenanigans. Meanwhile, whether the FNM or PLP is the governing party of the day produces the same dismal end result for our country, and all of us; except of course the political elite and their cronies who have unjustly enriched themselves at the expense of the rest of us.

Don't get fooled into believing it all boils down to a choice of two evil political parties (PLP or FNM) whose elected officials will always be reflective of an evil Bahamian society at large.....that's precisely what the political elite in both of these parties want you to believe. It's that fatalist belief that now emboldens their evilness and keeps them in power until memories fade and they are perceived to have become more evil than the other party. This is precisely why we have seen alternating landslide election victories for the PLP and FNM in recent decades. There are more than enough decent, honest, intelligent and hardworking Bahamians among us and we just need to figure a way of getting them interested in running for elected office and elected.

The absolute worst case scenario is we first become a failed state and then resort to using violence with outside (foreign) interference to change the unsuitable system of government that our colonial masters forced on us.

I actually believe the FNM are a lot better than the PLP . I think as a people we are a young country and do not realize w freedom comes responsibility , we may or not get there that is yet to be seen . I think sexually we are irresponsible and are producing more children than our economy can absorb in terms of jobs Plus we got rid of foreign teachers too fast .We have been covering it up w an ever increasing civil service and debt .The alternative is crime and poverty .Will we mature as a people or regress ,,that is yet to be seen.

If uncle Tommy Wells the masterful lair said the damage is minimal, it means there was a flood.

They will learn soon enough that you can not do wrong and get by, The Just one is in charge,

Many colony's comrade out islanders, struggling meet their own daily financial musts have long held suspicions that the Post Office's $70 million was but one the still to be added to the well-connected former grouping UBP's shopping carts list that were pre 2017 general election promised would be filled and delivered - prior to to next general election vote counting day, yes, no .... It would be sinful just make this so suspiciously too UBP looking pre 2017 general election arrangement up ....

Has some Bahamian "prophet" cursed that TCM place???? ....... Those GPO workers do not need any more stress for a while. They have endured enough for the past 10 years.

Get real all of you putting a political slant on a water leak. In every country and supposed first world countries there are failures despite millions being spent, particularily in the aviation and defence industries. Brand new cars fail is that the PLP or FNM fault, your new house can have a plumbing or electrical fault is that a political doing. Anyway a more important issue is under PLP or FNM the post office has always been a disgrace, lost mail, stolen periodicals to the extent that it just isn't worth sending anything of importance through the Bahamian mail system.

The political take on this incident is inescapable and fully warranted. You don't move a general post office from one delapidated building to another delapidated building, especially one owned by a senior cabinet minister at the time the lease was inked. And let's not forget the key terms of the lease were negotiated by our PM directly with the very conflicted landlord of the 'new' delapidated building notwithstanding Brent Symonette's many earlier assertions that he played absolutely no role whatsoever in negotiating the key terms of lease with government - in fact he later admitted doing so directly with none other the PM himself.

Ma Comrade OMG, wasn't populaces but Imperialists red shirts "Einstein" Minister Renward who trumpeted away on each the many times his very own delayed targeted openings $70 million new Post Office failed materialize that each one many official opening day delays only came about - because unlikes former PLP administration's many Post Office blunders - his Imperialists red cabinet were steadfast in guaranteeing populaces, nothing short of a “"state-of-the-art” General Post Office, yes, no .... Ma Comrade, this "Einstein" Renward is not just some creation upstairs populaces mind but he ranks high up as one them in the flesh and blood 35, ever be charged responsibility governing colony of out islands ...........