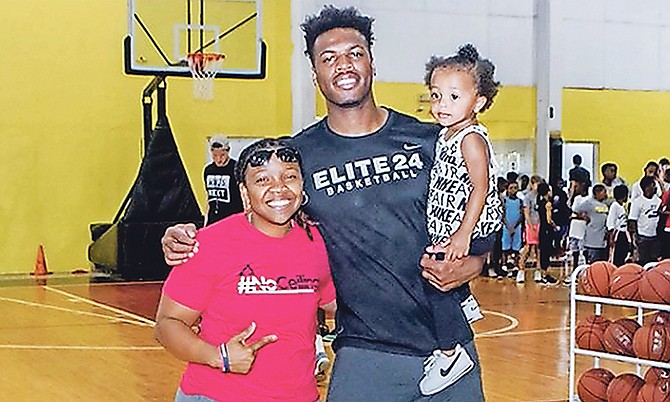 Yolett McPhee-McCuin can be seen during her surprise visit to the Buddy Hield summer camp in Grand Bahama. Photo: 10th Year Seniors

McPhee-McCuin hoped to serve as an inspiration alongside Hield and urged campers to explore careers off the court, beginning with an emphasis on their work in the classroom.

Following a hectic first season at the helm for the Rebels, she noted that the next Bahamian NCAA head coach may be sitting in the crowd.

“I didn’t know that God had this in the plans for me, I thought I was just going to be a basketball player, but I didn’t know coaching at this level was in the cards. I worked hard, I played Division I and that opened up the door for me to get a lot of other opportunities. Take care of your schoolwork. That’s one place where Bahamians fall short when it’s time to come to college. It’s all for nothing if you don’t have the grades. You didn’t take the SAT, the ACT, so it sets you back. Make sure you’re taking your academics seriously, especially for an athlete from the 9th-11th grade, these are important years for athletes.

“There are a lot of hurdles for you to get to where you need to be but I did it, Buddy did it, Jonquel did it, a lot of others did it so I want to encourage you to believe, to dream and show your appreciation to those who are doing it locally to put you in that position to succeed.

“You have people that come and give back in ways that a lot of people just won’t. It makes my heart warm to see this sort of thing continues,” McPhee-McCuin said.

“I used to be the only girl on the court, but those dudes used to take care of me, so don’t be afraid of embracing a dream, taking over and following the lead. Buddy’s a first, but I know he doesn’t want to be the last, that’s why he’s doing what he does. I’m the first, but I don’t want to be the last, someone in here will be an NCAA coach. At Ole Miss I have a Bahamian on my team, we have two Bahamians on the men’s team, so support us as best you can.”

The daughter of local basketball icon Gladstone “Moon” McPhee, she noted Hield’s commitment to giving back to the community that helped to form him into the person and player he is today.

“It’s an exciting moment for me, just humbling and proud. I remember going to camps and working out hoping I can be in a position to inspire others,” she said. “I’m so appreciative for what Buddy has done. A lot of people talk about it but don’t be about it and what he’s done and continues to do is impressive.”

In her first season at the helm, the Rebels finished 9-22, 3-13 in Southeastern conference play. They were eliminated in the opening round of the SEC tournament but the season was highlighted by the first ranked road win for the Rebels since 2011 when they defeated the Kentucky Wildcats for the first time since 2007.

The team also improved their win total by two from the 2017-18 campaign.

She also increased the team’s profile off the court throughout Oxford, Mississippi through several community outreach efforts.

The Rebels responded by agreeing to an extension that will keep McPhee-McCuin as the programme’s head coach through the 2023 season.

“It has been a whirlwind. I really haven’t had a chance to take a break yet. This is my first real break for the last year so 365 days I’ve been on the grind. When you start from the bottom you can’t skip steps, you won’t magically be in the top half of the conference in a year or two, it takes time. Obviously, they gave me an extension so they like the direction we’re headed in.”

“Val is going to bring electricity right away,” McPhee-McCuin said. “She loves basketball. That is what separates her from a lot of people. Val loves the game more than anything. What makes her special is she loves competition. I’m excited about her, it’s a huge learning curve coming from junior college but we need her to play right away.”

Nesbitt recently completed her sophomore at Chipola College. She averaged 17.1 points, 6.9 rebounds and 3.8 assists per game last season. As a freshman, she was named a Panhandle Conference first team selection.

“We’re going to compete,” McPhee-McCuin said. “Every time we step on the floor I want the hardest working team to win and I want that to be us.”