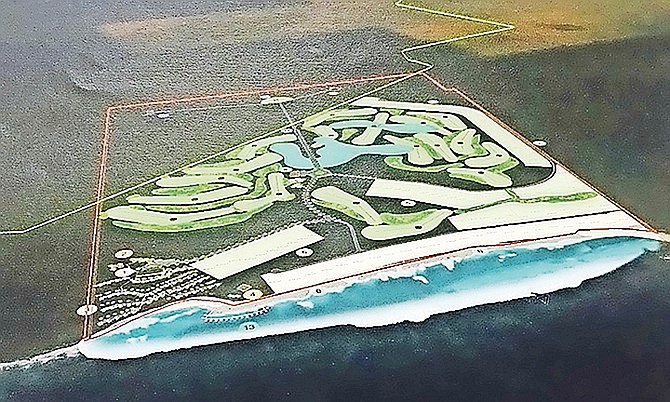 An artist’s impression of the site in South Abaco.

Opponents of a $580m south Abaco resort project yesterday voiced a lack of confidence in the ability of “over-taxed and under-resourced” government agencies to properly assess its impacts.

The Sustainable South Abaco coalition, in e-mailed replies to Tribune Business questions, said it was “not confident at all” that the Minnis administration and its regulatory bodies are equipped with the depth of expertise and analytical tools they need to make the correct decision on whether to approve the Tyrsoz Holdings development.

The group expressed particular alarm over the Bahamas Environment, Science and Technology (BEST) Commission’s capabilities to assess the project’s potential effects on south Abaco’s land and marine ecosystems given the multiple developer Environmental Impact Assessments (EIA) that it is already reviewing.

“We are concerned that the BEST Commission is over-taxed and under resourced given the high number of developments currently under the EIA review process in The Bahamas, especially given all the other responsibilities that they must manage,” Sustainable South Abaco argued. “We also worry that the BEST Commission may not be able to effectively review each of these as thoroughly as they should.”

BEST frequently hires outside consultants, such as Black & Veatch, to review EIA’s and subsequent Environmental Management Plans (EMPs) submitted by developers for Bahamas-based projects. However, as a non-statutory agency, meaning that it has no standing in law, BEST can only advise the government on environmental matters - its recommendations are not binding.

Sustainable South Abaco, which said its member organisations have significant experience in researching, living and working in south Abaco, pledged to share information with the government and be available to help with any aspect of Tyrsoz Holdings’ environmental review.

“In the interest of transparency, we strongly recommend that a group of outside experts should be involved with reviewing those two documents [the EIA and EMP] to assist the government in their decision making process,” the group added. “An economic analysis may also be warranted to determine what surety bonds the government should require of the developer.”

Tyrsoz Family Holdings and its principal, Ronnie Ben-Zur, have repeatedly emphasised that addressing all environmental concerns is at the top of their agenda. The developer’s promotional material promises to create “a world-class, environmentally-sustainable luxury island retreat with local appeal via the participating community while, importantly, maintaining South Abaco’s natural charm”.

However, Sustainable South Abaco said it had been “dismayed” by its meeting with Mr Ben-Zur and voiced concerns over whether he has the necessary financing to pull-off the 1,100-acre “greenfield” site development.

It added that the developer had informed them that funding would come from both his family and pre-sales of units to wealthy investors, but no further details were provided. Describing this as “alarming”, Sustainable South Abaco alleged that the area’s economy would be dealt a “devastating blow” if the Tyrsoz Holdings project was started but not completed.

“In addition to the environmental and cultural concerns explained in both our petition and letter to the government, we fear that if the large-scale, 1,100-acre greenfield construction project is started but not completed the resulting blow to the economy of South Abaco will be devastating,” the group argued.

“After meeting with Mr Ben-Zur we were dismayed by his lack of construction experience and what is likely insufficient financing to succeed in developing a multi-site project of this scale anywhere, much less in the remote and fragile habitat of South Abaco.

“Mr Ben-Zur claims some of the funds will come from his family and that ground won’t be broken until prospective buyers are identified with pre-sale financing for construction. With no supporting evidence of financial liquidity or performance bonds to guarantee completion of the project, his statements are alarming, and suggest that Tyrsoz Holdings lacks the financial resources to complete the $580m project as proposed,” Sustainable South Abaco continued.

“There are many examples of failed or struggling developments all over The Bahamas. Once the land and surrounding waters are destroyed, the ecosystem is altered permanently. As a result, our financial concerns are ultimately based upon a more fundamental set of ecological concerns which, if realised, will seriously degrade the culture and livelihoods of local Bahamians.”

A spokesman for Mr Ben-Zur declined to comment when contacted by Tribune Business over Sustainable South Abaco’s concerns. This newspaper understands the Tyrsoz Holdings principal is reluctant to speak until progress has been made in obtaining the necessary permits and approvals for the project.

However, one source familiar with developments, and speaking on condition of anonymity, argued that Sustainable South Abaco and others were “premature” in their concerns given that the EIA - while underway - has yet to be completed.

Agreeing with Ken Hutton, the Abaco Chamber of Commerce president, who previously said the development’s approval depended almost entirely on the EIA findings and subsequent EMP, the source said the fact Mr Ben-Zur had received the go-ahead from the Bahamas Investment Authority (BIA) to conduct the necessary assessments suggested the Government felt he was a legitimate investor with the required financial means.

“The Government has already done sufficient due diligence to feel he’s a sound investor,” they added. “He’s not so much a construction expert as a financier and fund raiser. That’s his specialty. He’ll also get a brand to manage it when completed.

“What they’re attacking him on now is par for the course. A deep analysis was done that showed perhaps 10 people from Abaco signed [the Sustainable South Abaco] petition and the rest were from America or elsewhere. They’ve not been to The Bahamas.

“It’s the same with the petition against the Disney project at Lighthouse Point. Around 75 percent of signatories were people who do not live here or are expatriates that do. They’re not thinking about the local people and the need for jobs. It’s not really doing the Bahamian people any good.”

Mr Ben-Zur’s career has largely involved transforming existing resort properties, such as the Radisson at JFK Airport and multiple hotels in Atlanta and Florida, rather than the “greenfield” property earmarked for the Tyrsoz Family Holdings project.

The developer is pledging to create 600 full-time jobs, and inject $2bn into south Abaco’s struggling economy, during the development’s first 10 years in operation.

But Sustainable South Abaco, a grouping of local and international organisations including the Abaco Fly Fishing Guides Association; Abaco Lodge; Bahamas Marine Mammal Research Organisation; Bairs Lodge; Bonefish and Tarpon Trust; Fisheries Conservation Foundation; Friends of the Environment; Islands by Design; and Delphi Club, said the environmental impact could not be separated from the economy.

“In an island nation like The Bahamas that relies primarily on tourism and fisheries, there is no reason to separate environment and economy, especially when it comes to sustainable living for Bahamians,” it argued.

“As a nation, we benefit greatly from the ecosystem services, resources and aesthetics of our environment, our shorelines, fresh water resources and sea food, as well as beautiful beaches for tourists to visit. So, if we want to be considerate of South Abaco’s economic needs in a long-term sense, then we also need to consider the long-term protection of the environment upon which it depends.”

Sustainable South Abaco also argued that there was no need to wait for the Tyrsoz Holdings’ project’s EIA and EMP because there were already three known aspects - the project’s “excessive scale”, as well as golf course and marina - that were “fundamentally flawed”.

It added: “In response to our initial statement of concerns, the developer said that he would not minimise the size of the development nor eliminate either the golf course or the marina.

The group added that it had gone public after failing to receive a response to its concerns from the Prime Minister, Dr Hubert Minnis, or his office.

Government does not give two hoots about Disney destroying South Eleuthera and our Bahamas, why would they care about Ben-Zur and South Abaco? It is only about the greasing of the paws.