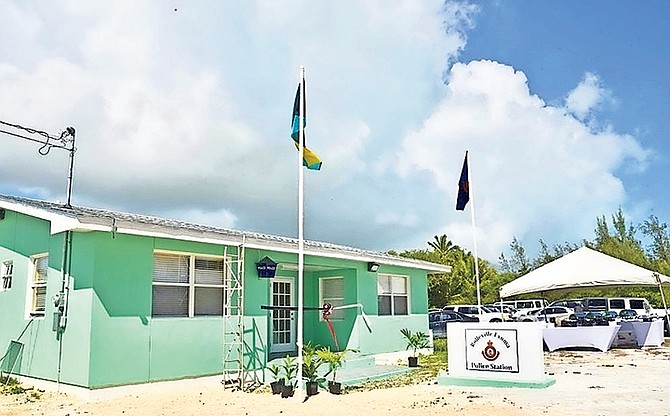 PRIME Minister Dr Hubert Minnis yesterday celebrated Exuma’s “economic expansion” as he delivered remarks at the re-opening ceremony of the Rolleville Police Station, which was renovated to “meet the demands” of the island.

Dr Minnis noted renovations for other police facilities across the archipelago are “in the pipeline”, adding his administration has invested over $17m in equipment and technology for the Royal Bahamas Police Force (RBPF) since 2017.

The prime minister noted the Rolleville station opened in 1978, with a “fairly basic set up” - four officers and an open room with a desk and two holding cells.

“Over the years, this facility became run down,” he said. “The substandard conditions became intolerable for officers. With Exuma having one of the busiest Family Island airports and attracting increasingly more visitors, the Rolleville Police Station no longer met the needs of the populace.

“When my government came to office, we pledged to develop an efficient crime fighting machine properly manned, trained and equipped to meet the demands of the 21st century.

“Over the past fiscal period the government has invested in renovations for police facilities.

“One of these is the Rolleville Police Station which is now equipped with an interview room and proper cells to meet the demands of Rolleville and by extension the island of Exuma.”

Additional renovations will occur in other Family Islands as well as New Providence.

“I am happy to report that there are more in the pipeline including in New Providence, the South-Central Station, the Northeastern Station, the Internal Security Division and the Central Division. In the Family Islands, they include the South Andros Station and the Eleuthera Division, Governor’s Harbour Headquarters.

“This administration is reversing the state of disrepair and neglect that we inherited.”

He also touted the investments his administration has made in the police force since the last general election.

“Since coming to office, we have invested over $17 million in equipment and technology for the Royal Bahamas Police Force,” Dr Minnis said.

This includes $5.9m on a new fleet of police vehicles; $5.9m for the expansion of closed circuit television; $3,053,925.28 for the implementation of the MARCO Alert System; $1.9m for ShotSpotter Gunshot Detection Technology; and $304,000 for “a communications tower to upgrade communications” in New Providence and all the Family Islands.

He added members of the National Neighbourhood Watch Council will “shortly” travel to Exuma for the “training and implementation” of local groups.

“To combat crime, we must continue to fortify our police force,” Dr Minnis continued. “Today’s reopening represents a further and considerable strengthening of the (RBPF). My government remains committed to improving infrastructure and providing the good men and women of the force with the necessary equipment to perform their duties optimally and professionally.

“The importance of proper police equipment, functioning vehicles and well-maintained stations cannot be overstated. I am sure that the Rolleville police officers will find their work easier to complete with a refurbished facility.”

“Because Exuma is set for greater growth and economic expansion, my administration will invest in the infrastructure needed for growth in Exuma.

“Toward this end, the construction of a new terminal and airside works at Exuma International Airport is planned to commence shortly.”

He also lauded Exuma’s natural beauty, noting at the 2018 Our Ocean Conference in Bali, Indonesia, the Exuma Cays Land and Sea Park won the “prestigious” Global Ocean Refuge Award for Most Effective Conservation of Marine Life.

“Such an award is akin to winning an Oscar award or an Olympic medal. With this international recognition, Exuma needs the quality of infrastructure that will enhance the quality of life for residents and the visitor experience for Bahamians and international tourists,” he said.

Did he mention the little girl with blood in her eye who was punched repeatedly by officers?