DIANE PHILLIPS: The strange, sick case of Jeffrey Epstein and why some people can never be satisfied

The world has watched the Jeffrey Epstein story unfold with the same kind of stomach-churning fascination with which it watched the Charlie Manson murders, curiosity piqued by a failure to understand how someone could do the things he did.

As a man, Epstein is far more interesting than Manson. Here was a man who seemed to have it all. Money, power, good looks, a man who mingled with the rich and famous, was worth hundreds of millions, had magnificent homes in New York, Palm Beach and an island in the Caribbean. Even his upbringing was picture perfect. Good education, great start in the world of high finance, going independent with clients like The Limited and Victoria’s Secret

In that high-flying world of designer drugs, endless vacations and careless abandon for the price of champagne, Epstein had just one flaw. It turned out to be fatal. He liked his women young. Very young. And he wasn’t about to solicit them himself. So as the days passed after his arrest for sex trafficking crimes and the story drew gasps and Page One headlines around the globe, perhaps the richest registered sex offender in the world took his own life in a Manhattan prison cell.

His death triggered an investigation likely to point fingers in directions from a near-royal socialite to workers in an understaffed prison to the bosses who ordered Epstein taken off suicide watch. This cross-the-start-line, first rush to win the blame-game has already taken down the former Secretary of Labour under the Trump administration, Alexander Acosta, who as US Attorney in Miami in 2007, let Epstein off the hook with a 13-month sentence in a county jail for molesting underage girls. In the world of criminal law, the light sentence for sexual assault was a slap on the wrist and that slap came right back to hit Acosta smack in the job jaw.

But my fascination with the case is not so much the legal angle. It is the age-old question of why some people are never satisfied. It does not matter how much money they have or power or status. I had a close friend like that who nearly killed himself trying to find satisfaction. Beautiful women, fine wine, great friends until the days of excesses searching for satiated happiness began to exceed the days of normalcy. It grew worse. He travelled more, searching, always scouting for that one experience, that one moment, that would finally land him where he wanted to be, in the palm of satisfaction.

Try as he might, he never did find that moment, that ultimate sense of relief that he was where he needed to be and all was good in the world. He never found it, that is, until he stopped looking. He took time off - from everything. He retreated. When he emerged a year later, he was a different man. He founded a great cause in the community that helps thousands of Bahamians every week. It is hard to find him without a smile on his face these days.

The difference is not simply that he changed course. He changed how he looked at the course he was on.

Instead of caving in to the ordinary thinking that satisfaction lies ahead, a wish for the future, obtainable tomorrow, he realised that by giving back he found satisfaction every day. He did not have to worry about what one writer called “a leak in a positive memory tank” that stokes dissatisfaction, he found a tank that was always full with a fuel that burned strongest when he looked outside himself.

Would Jeffrey Epstein ever have stopped in his tracks? Would fewer young girls have faced their future without being haunted by the evils and hurt of their past? We will never know. And that’s the tragic part of any investigation. We may learn who was complicit but we will never understand the cause nor undo the pain of its victims.

The Epstein case will be headline material for a very long time to come. Assets of more than $550 million will not be divided without bitter battles and, if justice is served, heads will roll right on to cots in some of the finest secure facilities the legal system has to offer.

Inagua is indeed a national treasure

On August 7, when Prime Minister Hubert Minnis presented land deeds to eight residents of Inagua finalising turnover of Crown Land awarded but not legally conferred earlier, the mention of Inagua and the image of the Rassins with flamingoes sent me exploring old documents.

Here is what I found, a speech by Sir Lynden Pindling, then Prime Minister and Minister of Tourism, on the opening of the first Bahamas Telecommunications Company facility in Matthew Town, Inagua on May 23, 1992. He jokingly wondered aloud if Inagua shouldn’t be renamed ‘as far south as Inagua” because he never heard it referred to any other way.

By way of praise, he said Inagua was “a remarkable island – some 763 miles away from the hub and capital of Nassau, boasting of nearly 100 percent employment, a 387-square mile national park maintained by the Bahamas National Trust and home to 50,000 flamingoes. Most of all, Inagua boasts a hard-working and industrious population that values education and abhors crime.”

Inagua has been the centre of so many labour disputes in recent years it was good to be reminded by two prime ministers 27 years apart that the southernmost isle is indeed a national treasure. 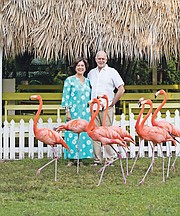 Barry Rassin with his wife Esther at Ardastra Gardens.

Congratulations to Barry and Esther

When a Bahamian, Barry Rassin, assumed the helm of Rotary International, the election was noted with a dash of pride and a sprinkling of decorum. Though Rassin would hold one of the most prestigious posts on the globe, there was no national day proclaimed, no parade in his honour, no medal he would be awarded as crowds gathered to cheer him. In Bahamian eyes, his important achievement paled by comparison with the pride that made us scream, pump fists and dance in the streets for Olympic successes like the Golden Girls or the Golden Knights.

So, it was good to see the excellent interview in The Tribune this week paying homage to Barry and Esther Rassin who spread goodwill about The Bahamas and good deeds in dozens of nations around the world during an exhausting year. It was also a treat to see the greatly under appreciated Ardastra Gardens, Zoo and Conservation Centre on the cover of Rotary International’s official magazine. Congrats, all. And if you have not been to Ardastra in a while, do go. We can see the yellow elder, our national tree, everywhere.

We can hear our National Anthem daily when ZNS comes on the air. We can see our Police, Defence Force, Corrections, Urban Renewal bands many times a year, but there is only one place in Nassau we can go to see our national bird, the Caribbean Pink Flamingo, and that’s Ardastra. They are a sight to behold.