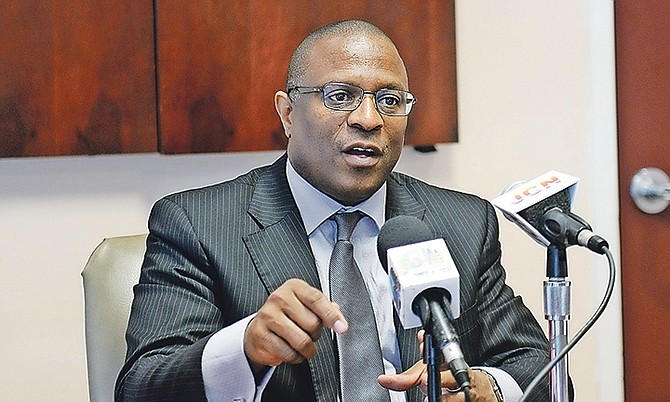 MINISTER of Agriculture and Marine Resources Michael Pintard expects to meet with officials in the Dominican Republic in a matter of weeks to address the serious issue of illegal poaching by Dominicans in Bahamian waters.

He stressed illegal poaching is a “massive concern” and that efforts are underway to determine its impact on the national economy on an annual basis.

The Bahamas National Trust has described poaching by commercial fishermen from the Dominican Republic as “the greatest single threat to Bahamian seafood resources”.

Mr Pintard believes the country has suffered “substantial” losses to its economy due to illegal poaching based on previous vessels that have been interdicted in Bahamian waters.

“It (poaching) is a massive concern, and we are now in the process of commencing a study to see what the loss is to the national economy on an annual basis due to poachers in the south, and sport fishermen and poachers in the north from the US.

“But, we know that it is substantial based on the vessels we have interdicted with the volume of various variety of marine products,” he said.

Mr Pintard said the Royal Bahamas Defence Force has beefed up its fleet and substantial investments have been made by successive governments to acquire new vessels.

Additionally, he indicated that government has just approved a multi-million dollar deal to purchase drones to monitor Bahamian waters.

“There will be two types – close-range and long-range drones – to monitor our waters. That is going to be quite significant in helping beef-up presence of the defence force in the southern Bahamas. We are doing it in Inagua, and the intention is to do the same in Ragged Island,” the minister said.

Mr Pintard said officials are working closer with neighbouring countries to crack down on poachers.

He reported the most recent interdiction has landed more than 100 poachers in prison, convicted with the largest two fines and incarceration in the history of country occurred in the last year.

“We are very proud of that. That would not have been possible if we did not have closer relationships with neighbouring countries. That is unheard of in the past, so that is a significant leap forward,” he said.

“We are also talking with officials from the country where poachers are coming from, and so, we have been in contact regularly with the American Embassy, and the Dominican government. And week after next, I expect to be having discussions in the Dominican Republic with officials concerning how we can better collaborate on (addressing the issue of) poaching,” he said.

Mr Pintard said that the Department of Marine Resources is also committed about strengthening enforcement efforts in the Bahamas.

“We have gotten Cabinet approval to hire 37 new fisheries officers throughout the Bahamas. It is the largest single hire in the Department of Marine Resources, and so the government is clearly committed to strengthening enforcement efforts.

“We are also going to introduce additional marine protected areas, where we believe fisheries stock need to be protected so that we can get heightened number to sustain the species,” he added.

"We have gotten Cabinet approval to hire 37 new fisheries officers throughout the Bahamas." Trust the hirees will have at least a modicum of education and experience in fisheries and defence of same..

Maybe we can start by tariffs on all products imported from the Dominican Republic. They poaching our seafood, but we still buying their products. Not very smart to me!

Obviously, the Dominicans consider Bahamians the same as Haitians.

Enough talk. The Bahamas would get their undivided attention if we followed Cuba's lead and simply open fire on any poachers found in our waters and burn and sink any boats caught!

Good people, Do I smell smoke being blown up our A$$. How many times have we heard the same garbage from other Ministers of Marine Resources? Mr Minister can't do anything because his money bosses has interests in these boats. Mr Minister sit down, shut up and be small. Another dumb FNM. I sat in on a few of his so called fisheries meeting in Abaco.....dumb as a buckets of rocks. He knows what former MPs have intrest in these boats.

Not only does this twit Pintard know who among our existing and former political elite have significant investments in the Dominican Republic's fishing industry that is poaching from our waters, but so does Hubert Minnis and Carl Bethel. When it comes to the fish in Minnis's favourite bowl of fish stew, it doesn't matter to him where the fish come from, so long as they are fresh for the stewing.