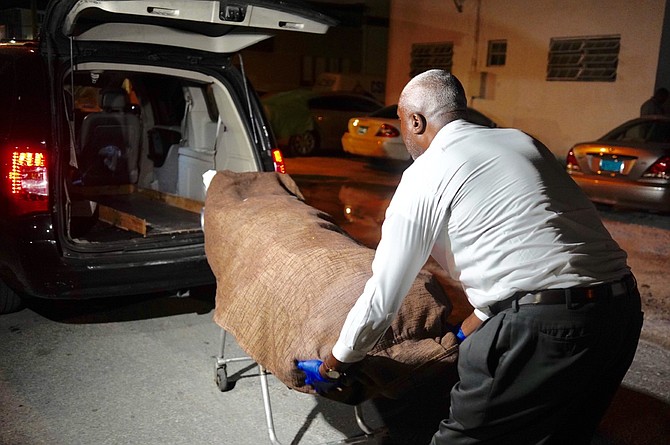 The body is removed from the scene off Cowpen Road on Wednesday night. Photo: Terrel W Carey Sr/Tribune staff

A YOUNG man was shot dead last night as he sat on a stairway.

Police reported that the shooting took place at about 10pm at Martins Close off Cowpen Road. Gunshots were heard in the area and police received reports that someone had been shot.

On arriving at the scene, they found the body of the victim.

Supt Shanta Knowles told reporters on the scene last night: “A young man was sitting on a stairway along with others when they were approached by a lone gunman who opened fire in their direction, hitting one of them and fatally wounding him.”

The shooting follows a double murder on Monday in the Pinewood Gardens area of best friends Dion Adderley and Dimetrius Dormeus. Police were not linking last night’s incident and said they were investigating both cases on their own merits.

Supt Knowles said: “We are always concerned when anyone loses their life, especially in incidents like this. We will continue to police the streets, we have our operations going – we will not stop those operations. In fact, we will further increase those operations, but again we are asking the public to partner with us so we can create safer communities.”

Anyone with information is asked to contact the Central Detective Unit on 502-9991/2 or Crimestoppers on 328-8477 or the nearest police station.

Oh,boy!. Police always appealing to members of the public for information without giving any witness protection and always present themselves to the scene of crime by a very high numbers AFTER & NOT BEFORE the crime is committed and on top of that they continually fail to address "MINOR COMPLAINTS" as a way to allow the people to get justice in their own very hands creating a huge public safety problems. All of these and other factors are beefing up a culture of murders in The Bahamas ,which could only be significantly decreased by them ( the police) exercising the right approach to prevent crime rather than solving it because if they prevent,there's not need to solve them. These are some right approaches:

B) Fix police presence in a proportion of ONE to SEVEN ( 1 : 7),this mean..,one police officer for every seven citizens so we can have Police Officers...,everywhere....Including public parks,Bush areas,beaches,streets,etc. Except in your home without your consent.

C) Establish,without any warning,sudden "police checking point" to take out of the streets anything that look like crime such as illegal immigrants,guns,drugs,fugitives persons,etc.,etc.

So many others,good approach to mention in order to fix whatever is wrong.

On what basis do you feel a ratio of 1:7 would be anywhere near reasonable?

Not even fascist states had such an unreasonable ratio....

The general ratio is around 1:450. From world wile norms. Please be rational.