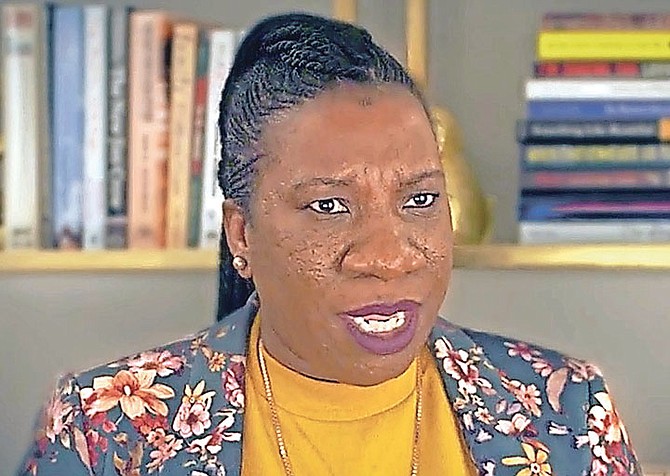 We often read stories about lottery winners. We read the winner was living a modest life and the unimaginable riches from the lottery will transform his or her life. There is once-in-a-lifetime excitement, then a list of worthy things the person will do with the money.

Sometimes, we see accounts of lottery winners after many years. These are mostly sad, even heart-wrenching. The winner may have lost everything over time, with unwise investments, bad luck and other poor or misguided decisions. Seldom do such stories recount a happy, successful life after a lottery win.

Tarana J Burke must have felt like a lottery winner two years ago. No, she didn’t win a huge amount of money. But she won something much more precious. She won worldwide acceptance for her life’s work. She told her story to an amazed audience the other day.

It started in 2005. Burke was working with abused girls in a programme she started in Selma, Alabama. The programme was called “just me.” It was underfunded and almost hidden away, but Burke was determined to make a difference.

“I found that there were lots of forces at work in our society that told black girls they were not worthwhile,” Burke said. “I witnessed the normalization of misconduct. I began to ask myself if human was really possible for these girls. They needed a different kind of attention to build self-esteem and begin to pull themselves up.”

Herself a victim of child sexual abuse, Burke said she felt “hobbled by guilt over her own role in that abuse”. The works of just-deceased Toni Morrison and Maya Angelou inspired her struggle and in her efforts to lift others.

Burke found that 75 percent of the girls with whom she worked in Selma had experienced sexual violence.

Then Burke won what for her was the lottery. In April 2017, in the wake of the revelations of the scandalous behaviour of American movie mogul Harvey Weinstein, Burke’s hashtag earned 15 million responses in 24 hours. Her hashtag was Me Too.

This good-natured, undefeatable black woman, originally from New York City, was transformed literally overnight from an anonymous social worker to a worldwide celebrity. As a depressing string of sexual abusers was revealed, Burke was constantly besieged with requests for comment.

“Everyone was asking me if I was surprised by all the responses from all around the world. “No,” she said. “I was simply pleased that people were talking about a subject that was swept under the carpet for generation after generation.”

“We’ve all been saturated by all the news coverage of Jeffrey Epstein. What about the girls he abused? Where is all the concern about them? Who cares about what is left of their lives?”

Speaking clearly and often emotionally, Burke could poke fun at herself and channel her determined optimism in describing her life. It was clear while listening to this astonishing person that her sense of balance and perspective will enable her to avoid the many perils of sudden fame that will lie ahead. Her ability to maintain her focus on those in peril should pull her through.

Epstein, Burke said, “exploited a particular kind of vulnerability. A lot of undoing needs to happen so it’s not OK to be a sexual predator.”

Weinstein, she continued, was the central part of a system that spun out a lot of money for a lot of people. All those people wanted to protect that system, and so they needed to also protect Weinstein. This gave him cover for many years. “Here’s what it was,” Burke said. “Weinstein’s power to generate wealth meant more to those who made money because of him than any one person’s humanity.”

When Burke truly realized what sensations she and her hash tag had become, she said she “panicked! I was freaking out that white people would get my stuff. Who would believe a 44-year-old black woman from the Bronx started all this stuff?”

To deal with her insecurities, Burke looked in the mirror and asked: “Are you going to be who you think you are today? Yes! We are all meant to do God’s work!”

Today, not so very long after fame found her, Burke said Me Too has global impact. Though she was herself abused at the age of six, Burke said her hash tag is for men as well as women. “Men are often sexual victims, too,” she said.

As the second anniversary of her hash tag passed, Burke lamented that “so many of us have to live or work where abuse has occurred, and we have to watch as people actively don’t care,” she said. “Too many people just look on from the sidelines.”

She finished up with a couple of notes about Democratic presidential candidates.

First: “Kirsten Gillibrand is still the only candidate talking about Me Too.”

Second, on Joe Biden: “His behaviour, with the touching of women, would make me feel uncomfortable. But I believe he’s basically a good guy. If we cannot tell the best guy in the room that he’s not perfect, how can we progress?”

It’s all in the records

You have one guess as to which programme was ranked at the top. Take a minute. It’s not a trick question. It’s the one that probably popped into your mind first.

ESPN’s top college football program in history is… Alabama! The researchers used a variety of measurements, but in the end a programme so dominant figures to be ranked at the top of the list. With 15 titles in the past 95 years and an astounding five championships in just the past decade under Nick Saban, the Crimson Tide are the easy pick as the best American college football programme ever.

We’re not going to name all 50 colleges and universities on the list. But some are notable.

Ranked second behind Alabama is Notre Dame. If it weren’t for Alabama’s amazing record in recent years, the Irish would be ranked at the top, far outdistancing every other team. But the past 25 years haven’t seen any titles and not much special success.

Ohio State is third. The Buckeyes are also rated the top programme during the past 50 years, never mind Alabama’s success during this decade.

Wait a minute! Yale? North Dakota State? Yale plays in the Division III Ivy League, and whoever thought of football prowess in connection with the Elis or the Bison?

Well, Carson Wentz, the stud young quarterback of the Philadelphia Eagles, did play at North Dakota State and won some Division I-AA championships there. And the Bison absolutely dominated then Division II from 1965-1990. They won a lot.

As for Yale, even considering this poll is weighted in favour of more recent predominance, the Elis have a very strong gridiron history. They played Princeton on the first Thanksgiving Day game in 1893 in Manhattan, and through World War II, they remained a powerhouse. In fact, they led the nation in total victories until just a few years ago when Michigan overtook them. Yale has won 18 national championships – three more than Alabama.

Other surprises in the Top 25 include fellow Ivy Leaguers Princeton, which played in the first ever college game all those 150 years ago, is ranked number 11. The Tigers have won 15 national championships. There is also Harvard, which checks in at number 13, with eight national titles. Princeton and the Crimson bracket Penn State, sitting at number 12.

Division III Mount Union, in Ohio, is rated number 16. The Purple Raiders won 24 straight conference titles before being dethroned three years ago. They once won 99 out of 100 games.

Many Bahamians will be familiar with number 18 rated St. Johns of Minnesota, which won four national titles and 465 games during the 50-year tenure of head coach John Gagliardi. There are numerous alumni here.

Also of local interest, the three Florida football giants are all ranked in the Top 21: Miami checks in at number 17, Florida State at 19 and Florida at 21. Georgia is 22, and last year’s champs, Clemson, are at number 24.

Clemson figures to move up the list and keep piling up wins in the next few years, while many of the others on this list should keep winning, too.

A history of success in college football seems to endure for many big teams, as the rich get richer every year.