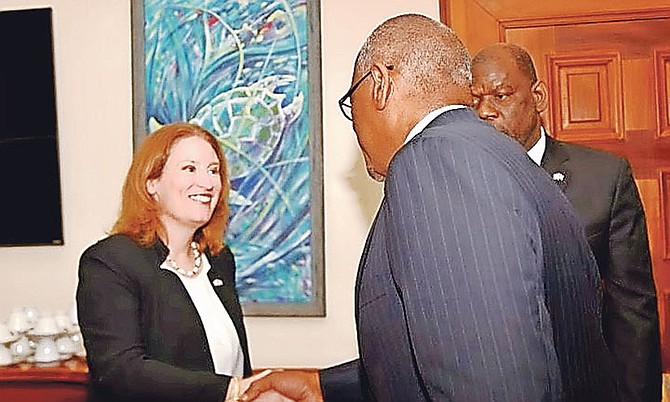 The new High Commissioner to The Bahamas from the UK, Sarah Dickson, meets Prime Minister Dr Hubert Minnis to present her letter of introduction.

THE government is looking forward to deepening its relationship with the United Kingdom, especially in the areas of education, climate and security, according to Prime Minister Dr Hubert Minnis.

His comments came in a statement released by the Office of the Prime Minister shortly after Dr Minnis met the UK's new High Commissioner to The Bahamas, Sarah Dickson, who presented her letter of introduction yesterday.

The presentation of the letter and subsequent meeting at the Office of the Prime Minister signalled the reopening of the British High Commission in Nassau after 14 years. Mrs Dickson's letter of introduction from British Prime Minister Boris Johnson noted the UK's intention to maintain "the relations of close friendship which so happily exist" between both countries.

The High Commissioner also expressed her enthusiasm in being appointed to reopen and head the UK's mission to The Bahamas.

"It is a great pleasure and honour to serve in this beautiful island nation as British high commissioner," Mrs Dickson said, according to a statement released by her office. She commented that both countries have a long shared history; common values such as democracy and the rule of law; and similar interests including protecting the environment and promoting trade.

She also noted that the reopening of the UK's mission in Nassau allows both countries "to supercharge our historic friendship as partners in the Commonwealth whilst signalling the UK's commitment to being truly global".

"I've been warmly received since officially arriving in The Bahamas," she added. "Everyone I have met has been kind and friendly. I am confident that the relationship and ties between our two countries will strengthen as a result of reopening the High Commission."

In a separate statement from OPM, it was noted that the government looks forward to enhanced relations with the UK, including trade and economic relations.

"With the resident presence of the United Kingdom in The Bahamas, we look forward to further deepening and strengthening of our relations, especially in the areas of education, climate and security," Dr Minnis said.

The High Commissioner has served the British Diplomatic Service for more than 20 years. Her last diplomatic appointment was as UK ambassador to Guatemala and Honduras. She has also served in Spain, Argentina and Yugoslavia; as well as various appointments in the Foreign and Commonwealth Office in London. Mrs Dickson has just returned from a role as international director at the Scotch Whisky Association supporting British exports around the world.

The High Commissioner will be accompanied by her husband and two children during her posting to The Bahamas.