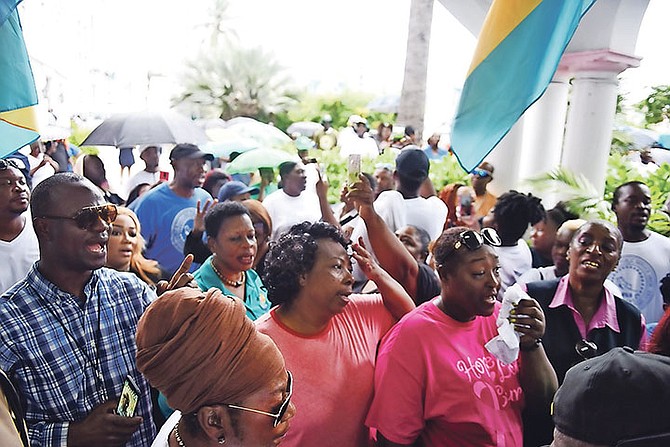 The protest at Rawson Square.

PRIME Minister Dr Hubert Minnis hopes that union representatives will come to appreciate the less-than-ideal state of the government’s finances when he meets them on Saturday, but says he understands the anger and frustration of Bahamian workers.

He spoke to ZNS about the upcoming meeting yesterday after members of the Bahamas Public Services Union marched and protested in front of the Churchill Building on Bay Street where the Cabinet Office is located.

The union is currently negotiating a new industrial agreement.

Dr Minnis told ZNS: “I understand the anger and the frustration of the Bahamian populace, especially those in the public service. We are doing all we can. We must understand that when we came into power, we met the economy and the landscape at the bottom of the pit. The economy has grown and continues to grow and we are taking ourselves out of the pit, but still have a lot to do. We want to ensure that we can continue to provide opportunities for everybody. We have organised a meeting on Saturday with unions and all relevant personnel, all my ministers, so that we can make the unions know the state of the economy so that we can forge the way forward with the involvement of everybody, inclusive of the unions and we would see the direction we need to take not just for a few, but for the entire Bahamas.”

Dr Minnis also addressed recent unrest among junior doctors who went on strike on Wednesday, plunging the healthcare system into emergency mode. Bahamas Doctors Union representatives said they had a favourable meeting with Dr Minnis on Wednesday but will continue their strike until their concerns are satisfactorily addressed.

Dr Minnis said: “They have a number of longstanding issues and they will continue the discussion with the Public Hospitals Authority on Monday but I want to assure the Bahamian public that in no circumstance will their health be compromised and we will do everything to ensure that the health of the Bahamian people is not compromised and will continue to be offered the best possible (healthcare services) to them.”

Members of the BPSU make an average of $19,000 a year, with some earning less than $1,000 each month, Labour Director John Pinder told The Tribune yesterday.

Asked to contextualize the BPSU’s concerns, he said about ten percent of members make less than $12,000 a year, with 80 percent making under $30,000.

“Most of the lowest paid civil servants are members of the BPSU,” he said.

He added that contrary to claims, members received a raise as part of its last industrial agreement which he negotiated and had signed in 2014.

“When we said to the previous government that the yearly increment increase would make it so that the minimum salary in the public sector would be $12,000 per annum, they cut it at $11,600,” he said. “The other $400 was never added like it was supposed to so a lot of them are still under $12,000 per annum. This government has decided to look at it because the prime minister has said he is concerned about the bottom line of the lowest income people because he thinks $220 per week is too low. He had asked me to make some recommendations and I had recommended $300 a week.”

BPSU members making less than $12,000 a year do mostly janitorial work with those making more than this figure typically doing clerical work. On the high end, a few senior BPSU members make about $45,000 a year.

“What the union is looking at is that the last negotiations we had, there was no VAT involved. Since then there has been the introduction of VAT and then an increase in VAT,” he said.

Doc and Turnquest do not show that they should meet their obligations first.

my advice for the BPSU; go ahead, squeeze blood out of the stone, it really works.

yup, I want to see it happen @ JackArawak. These people are ridiculous!

doc can not lie himself out of this one. his actions speak for themselves. money for high cost rent. travel. free university and the list goes on.

Governments consistently increase the cost of living through taxes, waste money on re-election schemes (NHI, free college, unnecessary roadworks etc), lose millions in tax concessions to foreign investors, borrow and waste public funds and do not allow govt salaries to keep pace with inflation and they wonder why they have a problem?

Obviously the Colony of Out Islands 'Most' Honourable Prime Minister, has fired the entire slate 'lie blockers' left behind by former Rt. Honourable PM Perry Gladstone. How convenient so quickly after firing the 'lie blockers' to possess such confidence at trashing the constitutional oath of office of the PM. Nowhere in oath is it written that it's okay for a sitting PM to spin the populaces with nothing but the whole 'varnished' truth.yes, no .... Is Erica and the dis-guarded ACEE, now working as a propagandists tag team ....

Dimwitted Minnis has always been much too arrogant and nasty to understand the anger and frustration of Bahamian workers. And even if he did somehow miraculously manage to change his arrogant and nasty ways, it still wouldn't help because he also sorely lacks the core leadership sills and competence necessary to govern our country in the best interests of its people. It could never be the people's time under a Minnis-led FNM government.

Please, Mr. 'Most' Honourable Comrade Prime Minister, stop it!
It may come as a surprise but this comrade has taken your case before high court 'populaces' at large. A jury populaces - were too deadlocked 'choked' reach verdict - after being ambushed by your outpouring of purporting understands 'working populaces' anger and frustration,' - yes, no there is no making this cra# up ....

Add the frustrations of BPL and BTC's less than desirable services to this equation, and the only real big surprise here is why thousands more Bahamians aren't protesting!