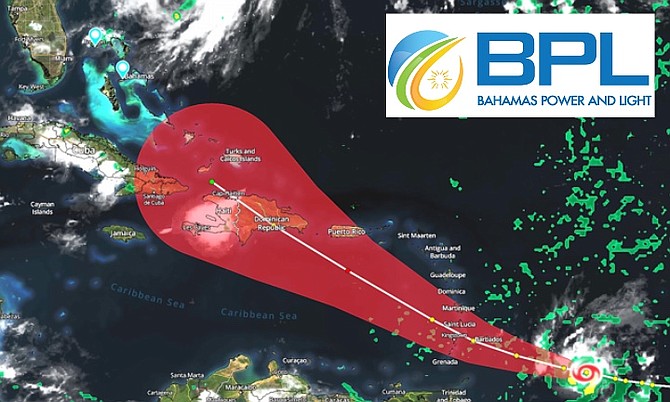 NEWLY formed Tropical Storm Dorian is projected to have no significant impact on The Bahamas, according to forecasters.

Alyson Hoegg, a meteorologist with Accuweather, said the storm is still east of the Lesser Antilles but expected to move into the Caribbean Sea by midweek.

If it strengthens, the storm is likely to move more south towards Jamaica and Cuba, Ms Hoegg said.

If it crosses Hispaniola towards the Bahamas instead, Dorian is expected to get torn apart as it moves over the terrain with its only projected impact on the country to be enhanced showers.

Dorian is the fourth named storm of this year’s Atlantic hurricane season.

The third named storm, Chantal, has already dissipated out over the central Atlantic, Ms Hoegg said.

“As we go through the week, we may see (Dorian) move into the Caribbean Sea by midweek. It’s still a concern that maybe it will come northwest across Hispaniola towards the Bahamas late in the week or early over the weekend.

“The concern is it’s very weak when it would come across Hispaniola, if it does. It never strengthens a whole lot in the Caribbean Sea, if that were to happen we could see it move more south out towards Jamaica and Cuba. But if it does cross Hispaniola, it likely gets torn apart as it crosses the higher terrain.

“By the time it would get to the Bahamas next weekend, it would just be an open tropical wave, so enhanced showers and not anything significant for the Bahamas,” she added.