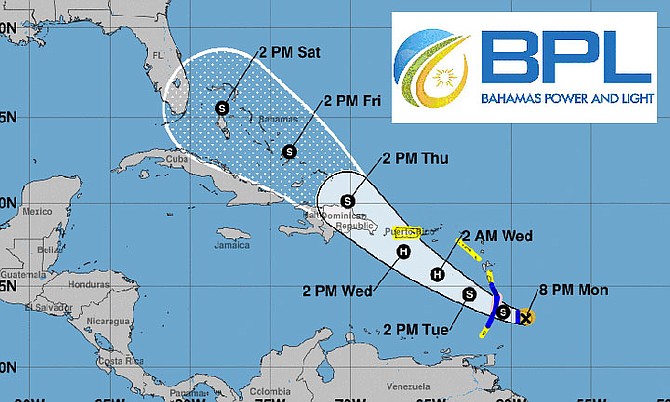 FORECASTERS yesterday projected there was now a 50-50 chance Tropical Storm Dorian could become a “big deal” for the country by strengthening into a hurricane once it reaches warm waters in the coming days.

“There is a chance, looking at the projected path, Thursday afternoon it could be in the territorial boundaries of The Bahamas,” Capt Russell said.

“We are going to send notice out to mariners, we want to make sure they have a plan of action to secure vessels, traps. We are encouraging The Bahamas to be prepared, this is what we have done this entire year, just be prepared.

“If there is any major deviation or rapid intensification, we will notify the Bahamas,” he added.

The storm is on track to cross Hispaniola - the island shared by Haiti and the Dominican Republic - tomorrow, but a deciding factor will be whether it goes directly over its higher terrain or goes over the eastern portion that will allow it to maintain its circulation.

The easterly route will give it a stronger chance of maintaining its integrity and re-intensifying, developing into a hurricane once it gets to the warm waters of the Bahamas on Thursday.

On Sunday, Dorian was projected to have no significant impact on the country as its likely path saw the storm move south towards Jamaica and Cuba or be broken up by Hispaniola’s high terrain.

However, meteorologists at US-based weather service AccuWeather told The Tribune “things have changed”.

“It could become a big deal for you because there is a chance that Dorian may pass to the east or over the eastern portion of Hispaniola on Wednesday night and Thursday, and by avoiding higher terrain over the island it could maintain its circulation,” said AccuWeather Senior Meteorologist Dan Kottlowski.

“Whatever is left of it is projected to move northwest into the Bahamas during Thursday and Thursday night and given the warm water, fairly decent conditions, if low level circulation remains in tact then it would give it a much better chance to re-intensify. If it does, it could certainly bring impact to New Providence and the Nassau area.”

Mr Kottlowski explained the storm could move over Hispaniola or take a more favourable route through the Mona Passage - waters between Puerto Rico and the Dominican Republic. He said forecasters will have a clearer picture by Thursday morning but projections could improve as early as today.

“The two main options for Dorian,” he continued, “it goes right through the middle of Hispaniola where the higher terrain will break the system apart. The second scenario is it moves over the eastern most part of the Dominican Republic and maintains its integrity and re-intensifies.

“Both solutions are 50/50 right now. Let’s take the worst case scenario - it would move up the Bahamas chain and move over pretty close to Nassau sometime Saturday morning…it’s conceivable it could be a full fledged hurricane.”