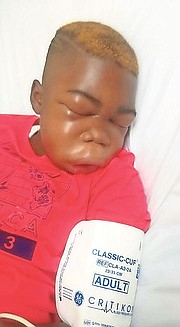 Tarique experienced severe swelling of his face during his latest medical episode.

Like many other Bahamian kids his age, 10-year-old Tarique Miller was enjoying his Summer holidays and looking forward to a family vacation in Florida. But unlike other children, Tarique suffers from hereditary angioedema (HAE), a rare condition that causes recurring and severe swelling in various parts of the body. And he had his most recent and “scariest” attack yet on the first day of his stay in Florida.

After experiencing severe swelling in his face, Tarique was rushed to Jackson Memorial Hospital in Miami and kept there over night. It was a terrifying ordeal for his mother, Angelica Miller, who said the only thing she could do was watch as Tarique’s face ballooned.

“He was supposed to be enjoying his vacation and on the first day he had an attack,” Ms Miller told Tribune Health. “That was actually the first time I have ever seen Tarique’s condition at that level. It was just a scary thing. I cried so much."

Ms Miller said she always keeps medication on hand should Tarique experience an attack. However, because Tarique’s episodes have been occurring much more frequently than before – several times this year alone – the supply has been depleted. And Tarique’s parents have not been able to replenish the medication as quickly as they would have liked to because one dose alone costs about $6,000. 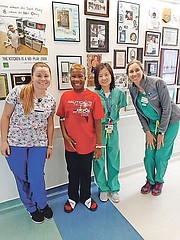 Tarique and the medical team at Jackson Memorial Hospital in Florida.

Doctors in the US have advised both the family and local health officials to keep at least two vials of Tarique's medication in New Providence. In instances where the drug is not available, Ms Miller has had to somehow raise the funds needed to purchase the medicine.

Over the past year Ms Miller has resorted to water drives, cook-outs and letters of support to assist her son as best as she can. She is now asking for the public to assist in any way possible. After Tarique's latest attack, the family could be facing a medical bill of close to $100,000, she said.

“It is just really difficult for us. The medication alone is very expensive. Apart from buying medication and keeping it on hand, we also have to take care of ourselves and live. Tarique’s father is the only one who is working. My child’s condition is what has been keeping me from working because I know what happens any time he has an attack," she said.

During flare-ups, the body experiences major swelling, particularly in the chest cavity, resulting in restricted breathing. Patients suffering with the condition are unable to produce the necessary protein needed to reduce swelling and fluid retention in the body. 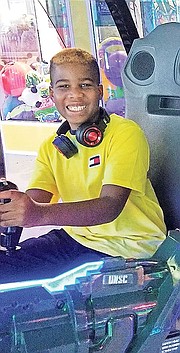 Despite his latest severe attack, Tarique was able to enjoy his Summer holidays.

To combat attacks – which can last up to six days – Tarique requires a synthetic protein. Tarique was first diagnosed by doctors at the Joe DiMaggio Hospital in Florida in November 2014. Ms Miller said although it has been a challenging journey since then, she is not giving up on her son. “I know God has a plan for him," she said. She is also grateful to all those who have assisted her family over the years.

Though Tarique was hospitalised during his vacation, Ms Miller said he was still able to enjoy his Summer once he was released from Jackson Memorial. He is now looking forward to seeing all of his friends when he returns to Albury Sayles School where he will enter the fifth grade next week.

People interested in assisting Tarique can do so by contacting Ms Miller at 447-9311 for more information.