Dorian’S Path May Miss Us 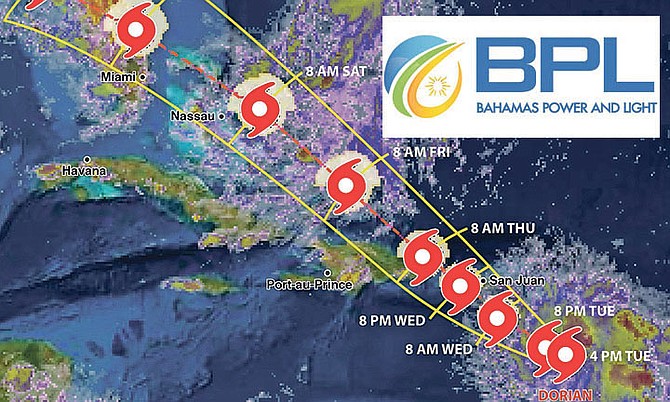 IT IS still too early to tell whether Tropical Storm Dorian will strengthen into a hurricane in time to affect the country.

The storm’s track has moved further east over the last 24 hours, weakening a bit as it moved through the Windward Islands.

Last night, Dorian was moving generally on a northwestern course toward Puerto Rico and was no longer expected to develop into a hurricane before it makes landfall there.

But even if Puerto Rico’s mountainous terrain significantly weakens the system, forecasters say it will still be a strong storm with winds of 60 mph to 70 mph.

The Bahamas Department of Meteorology began issuing alerts on Dorian at 2pm yesterday.

Duty forecaster Gregory Thompson told The Tribune models currently projected the storm to pass somewhere southeast of the Bahamas, “well to the southeast”.

However, he noted the storm’s track won’t be clear until after it moves over Puerto Rico, and passes Hispaniola.

“It really won’t be clear until it passes Hispaniola but because it’s shifting more towards the east track,” Mr Thompson said. “The centre is moving over Puerto Rico, the core will be moving across landmass so that will tend to weaken it some but that won’t happen until Thursday morning.”

This was echoed by meteorologists at US-based weather service AccuWeather.

“It’s going to go over land,” said AccuWeather Senior Meteorologist Dan Kottlowski, “that will disrupt the circulation and that can slow its ability to intensify as it moves towards the Bahamas. Right now it probably will have a good chance of reorganising and trying to restrengthen as it moves northwest through the Bahamas on Friday and Saturday. It will gradually increase in intensity but we’re not sure it will have time to become a hurricane by the time it makes its way up close to the northern Bahamas.

“Right now the current forecast has it passing east now of Nassau and just to the east or right over the eastern most portion of Grand Bahama during late Saturday and Saturday night but we do expect it to turn on a more northwestern course and move inland towards Florida.

“It may have enough time to strengthen to a hurricane before it makes landfall, before Florida. There is still a lot of uncertainty, moving over mountains of western Puerto Rico it’s possible it may get ripped up. The latest computer models are showing it having a much better chance of becoming organised when it moves through the Bahamas - but not in enough time to impact the country as a hurricane,” he said.

Boy this report is almost completely opposite to what the NHC is saying. Many are now predicting a potential Cat 4 when it skirts the eastern islands of The Bahamas. By no means are people saying it will miss The Bahamas. This story should be removed as it may give too many people a sense of complacency. This storm can just as EASILY become a monster in the next two days as it can fall apart.

I would love to see the link to this alleged report. I have never read any outlook on TS Dorian predicting it develops into a Cat4

LMAO I'm sitting here thinking same. Post the link to this report you speak of please?

I didn't see CAT 4 predictions, but it has been updated to CAT 3 based on the 11 AM update. Potentially passing over Grand Bahama and Abaco as CAT 3 before it gets to Florida.

It was posted as an update on Accuweather.

Read the comments section of the link I sent. That contains some (not all) valuable information from many, many participants that follows these storms closely. From amateurs to 4th year meteorology students to meteorologists. The significance is that the many dozens of them all research different aspects of the storm and the environment and together you can get a much better read on what the storm is doing in real time... not every 6 hours or so. You're welcome!

Thanks for the info!

You guys need to get out more...

The 0Z and 6Z Wednesday runs of all three models predicted that Dorian would intensify to a Category 3 or 4 hurricane this weekend as it approaches the Southeast U.S. coast.

No it's true. Well at least they are now saying a Cat 3 - 115 mph just before it hits Florida. Go to weather.com/storms/hurricane-central (But the middle of the cone has it slightly east of us. However these trajectories do tend to change.)

Storms always intensify as they move over The Bahamas unfortunately.

Minnis and Turnquest are praying for the eye of Dorian to pass right over New Providence so that they can then blame BPL's continuing power outages on anything but themselves.

Who dreams up Tribune's headlines? You need to THINK before you strike the keys!

BPL employees have nothing to do so they are tracking the weather to make themselves useful.

I have news for their union tho, the weather satellite only works till sundown

Seldom do you see either the Ministry of Works or BPL cutting down tree growth near power lines to prevent significant damage to the power grid in the event of high winds such as those experienced during tropical storms and hurricanes.

Here's a webcam from St. Thomas - getting battered now.

Proximity demands preparations, as it can change overnight. It can wander away or towards, and even turn back (Betsy, and another more recent) Shutters up, debris secured, earlier the better. why get caught out?