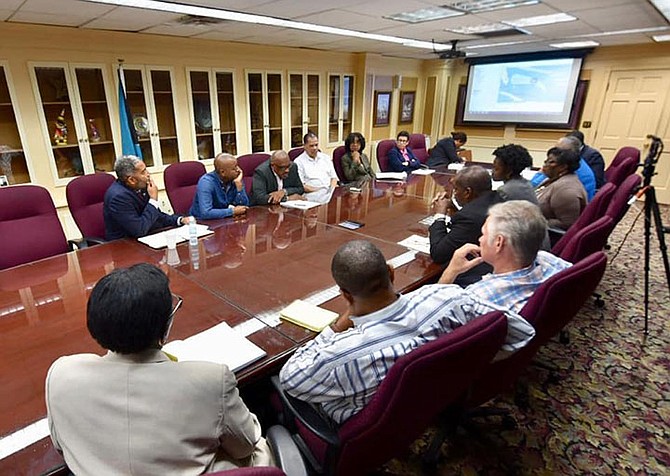 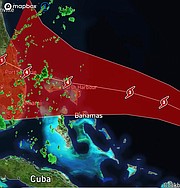 THURSDAY EVENING UPDATE: HURRICANE Dorian could intensify into a “very damaging” 156mph Category Four storm that lingers for hours in the Bahamas, according to AccuWeather senior meteorologist Dan Kottlowski Thursday.

In an interview with The Tribune, Mr Kottlowski said new computer models show that when Dorian passes over Grand Bahama and Abaco this weekend, there is the potential for it to develop into a more powerful storm.

These models predict Hurricane Dorian making landfall on those islands Sunday and into Monday, he said.

An image reportedly of a dock in Spanish Wells experiencing rising waters as parts of the Bahamas brace for Hurricane Dorian.

WITH former Tropical Storm Dorian intensifying into a Category One hurricane yesterday afternoon, Department of Meteorology Chief Meteorologist Basil Dean yesterday confirmed Abaco will receive most of the effects of the storm.

Describing Hurricane Dorian as a “rainfall system”, Mr Dean noted the storm will mostly move in a “parallel motion” to the archipelago, and the southeast Bahamas will begin experiencing its effects tonight.

In this vein, National Emergency Management Association (NEMA) Director Stephen Russell yesterday urged Bahamians across the archipelago to adequately prepare for the approaching storm, as he noted the government’s overall response and recovery mechanisms are “ready”.

“As far as New Providence is concerned, we expect Dorian to pass right to the east,” Mr Dean told The Tribune.

“We will certainly get some rain… some of the feeder bands will dump some showers over New Providence as it passes. So we’re looking at a parallel motion to the island chain until it approaches North Eleuthera headed toward the Abacos, a shift towards the west is anticipated.

“The core of the winds could come very close to the Abacos before taking a sharp westerly turn toward the Florida peninsula. So we’re looking at still it being a rainfall system as opposed to one of significant winds.”

“The feeder bands will certainly generate some showers, some of which will be heavy at times,” Mr Dean continued.

“Abaco perhaps would get some tropical storm force winds…because the storm has also grown in size. So the maximum sustained winds suspend outwards I think about 85 miles from the centre. So It could come within about 65 miles of the Abacos.”

“We’re looking at about 85 maybe 95mph of the Tropical Storm force winds from the centre of the system,” he added.

When asked if Abaco is expected to feel most of the effects, Mr Dean replied: “Out of all the islands, yes, Abaco would receive the most of it”.

By Sunday night the system is expected to be out of the Bahamas.

Mr Simmons added watches and warnings for the northern Bahamas could possible be released either today or tomorrow should Dorian remain on its projected path.

He noted the islands of the central and southeast Bahamas could “experience some possible sever weather activities, some showers and thunderstorms from the outer bands of Dorian”.

Speaking at this same event, Captain Russell urged people to secure their homes, properties, businesses, and assets - not just for Hurricane Dorian, but any other potential storms.

Noting forecasters predicted 17 named storms for this hurricane season, which will end November 30, Captain Russell said: “At this point we’re now at the 5th named storm, so we’re again stressing for the entire Bahamas to be prepared for what may come from the remainder of the hurricane season over the next minus 100 days”.

“From Puerto Rico to off Grand Bahama that’s almost 600 miles (of ocean),” Captain Russell said. “So there is a possibility for the storm to intensify as it moves along that part.

“North Eleuthera, Grand Bahama, as well as Abaco, (these) are some vulnerable areas,” he continued.

He also pointed out Sweeting Cay and East Grand Bahama as low-lying areas that are susceptible to flooding.

“From a government standpoint, the government’s mechanism is ready. NEMA (has) been having (its) series of meetings from February of this year.

“In June of this year we had a major disaster exercise with all government agencies, ministries and departments, where we did a test case of a category four storm impacting New Providence, and that exercise went very well.

“So all the agencies of government, our overall response and recovery mechanism(s), they have all been tested and are ready to respond as necessary…Our aim is to make sure people are prepared for whatever may come.”

Sounds a little down-played based on Basil's quotes. There are some models that show Dorian cutting right through Abaco around Hope Town area. Of course its just one of the models but it could also be a Cat3 storm with New Moon tides. Atleast Capt. Russell seems to be keeping the level of caution up. I think Glass Window Bridge should be closed in advance from late Saturday, give the notices now.

Don't expect Minnis to give a national address telling us what his government is doing now to prepare for the currently predicted worse case scenario, being a direct hit on Abaco. In fact I suspect Minnis cannot name three significant things being done right now by his government to aid the many Bahamians in Abaco who will be left destitute after a direct hit by category 3 Dorian. If there's one thing we all know about the incompetent Minnis-led FNM government, it's a government that's not the least bit proactive about anything and therefore always finds itself governing in crisis mode at great cost to taxpayers.

Of course Minnis will get whiff of this post and hurriedly arrange a national TV and radio address.....but he will have little to say about what his government has done and is doing well ahead of time to help the people of Abaco prepare for and recover from a predicted worst case category 3 direct hit.

wow what PM Minnis do to you. Literally every comment is about him.

They are now predicting it will be a Cat 4 when/if it goes over Abaco and Grand Bahama.

Wave forecast peaks at 11-15 ft swell on Saturday evening into Sunday off Eleuthera. If there is a high tide peak at the same point, the Glass Window Bridge will not fare well. Send the closure notices now.

I smell that idea of a hurricane tax coming up again.

And rightfully so because Minnis and Turnquest firmly believe that taxing the Bahamian people to death is what governing is all about.

The extra money will help the government to pay for all the foreign trips the gussie mae cabinet has been taking around the world with their entire families and government employees.

Don't forget all those red plate cars you see driving all weekend to the food store and in church and at every funeral. Free gas at the government gas depo.

All of the "forecasting" for this storm was wrong from the very beginning. How they determined it would be a non-event a few days ago never made sense.

New Providence will probably get a near or direct hit after the low pressure by Cuba moves westward.

Abaco and Grand Bahama will get hit equally as hard. Don't forget this hurricane will increase in both intensity and size by the time it passes over these islands and they eye will pass over both of them.

This is a time to pray & ask God to keep our people safe especially who resides in the vulnerable areas of this dangerous storm and hope all of our boaters comes in safe not a time to throw political jeers.

I think there is sufficient evidence to show that praying does not help AT ALL!

Hurricane Dorian's projected path is such that it looks like all of the Red Chinese concrete used in the construction of Baha Mar and The Pointe will get to dodge another bullet, as was the case with Hurricane Irma. But it's only a matter of time before that luck runs out.