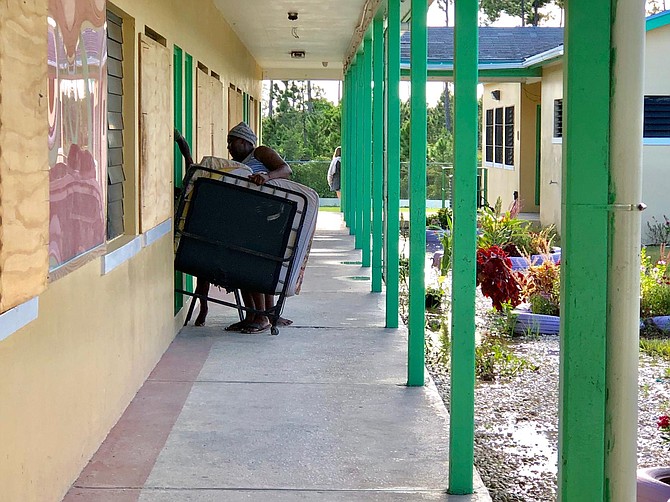 Another arrived with a refrigerator.

One man even brought his pitbull in a cage to the Central Abaco Primary School shelter in Marsh Harbour but was promptly asked to leave and take the dog elsewhere.

As Hurricane Dorian inches toward this island, vulnerable residents have been scrambling to safeguard their most prized possessions, even if it means bringing them along to one of the 15 shelters available around the island.

When The Tribune visited the Central Abaco Primary School around 6pm on Saturday, more than 100 residents had already settled there, hours before Dorian’s arrival. By 8pm, according to group manager Christine Lightbourne, that number had doubled to more than 200.

“From previous experience, we sometimes have 400 to 500 persons in this shelter,” said Ms Lightbourne, who works for the Red Cross.

Stillness echoed over the normally bustling Marsh Harbour town on Saturday, with all but a few stores closed and residents at home making their final preparations.

The weather shifted sharply throughout the day, with a mixture of intermittent rain and sunny skies.

“From previous experience,” Ms Lightbourne said, “the average Abaconian and even the expats who live here who have encountered hurricanes, they don’t take it lightly. They’re always in a preparedness mood and they follow the alerts and they respond very well.”

A temporary bed in the shelter.

The government issued evacuation orders for parts of Abaco on Friday.

Few people on the cays have taken advantage of the transportation made available, however, worrying officials who insist daring rescue missions will not be attempted in the midst of the storm. By late Saturday officials were still trying to determine how many had chosen to wait out the storm in their remote locations. The total, they estimated, was in the hundreds.

An evacuation warning for residents of The Mudd and Pigeon Peas. Photo: Terrel W Carey

On midday, Defence Force officers accompanied a Haitian pastor, Wilson Isnord, as he used a megaphone to encourage people to evacuate The Mudd and Pigeon Peas areas, the most vulnerable areas on mainland Abaco.

The residents were encouraged to go to shelters like the Central Abaco Primary School. Later, around 7pm, police officers visited the area and more forcefully pushed people to leave. 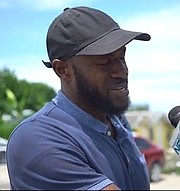 When they go to shelters, they will find that people are grouped and placed in different blocks, Ms Lightbourne said, with priority given to keeping families together and elderly people near the restrooms.

“We try to balance it so we can’t have a lot of people acting crazy,” Ms Lightbourne said. “The mindset of people is that they do think they can have a room for their families and like I told them, you can be placed in a room but as the demand is required, we will put other persons in in there with you.”

The primary school has about 30 available rooms. It was used as a shelter during Hurricane Floyd 20 years ago, an experience Ms Lightbourne prefers not to recall.

“The shelter was opened up for a month during Floyd,” she said. "People had to be relocated because children had to go back to school. We had to take over 200 people to another location. It was terrible.”

People in shelters are required to bring their own food and personal hygiene supplies.

Two things they cannot bring are alcohol and pets.

“Smoking is allowed outside the room but no booze is permitted on this property,” Ms Lightbourne said.

Once again much too little, much too late. Notwithstanding the increasing frequency of category 4+ catastrophic hurricanes, our country remains without an effective massive evacuation plan. The lack of preparedness for a powerful hurricane like Dorian is not too dissimilar from the lack of preparedness behind the BPL debacle. Both of these disasters will have caused great loss of life in our country; in BPL's case it's the very elderly and medically ill who cannot tolerate the severe summer heat during power outages. Yes indeed, the Minnis-led FNM government is going to have more blood on its hands than any other government in the history of the Bahamas.

All we can do now is pray for the safety and well being of our fellow Bahamians in Abaco and Grand Bahama during this catastrophic event. How the Minnis-led administration handles the post-Dorian aftermath of complete devastation in these two major islands will tell all.

Not even a devastating hurricane can blow away the foul air of a political hack trying to find any excuse possible to criticize the first government since independence actually attempting to address the rampant corruption that has since beset these Heaven blessed isles.

You have no idea my friend just how corrupt the current government is......then again, if you're riding that gravy train reserved for the select few at the expense of the vast majority, you might well know as much or more than most of us about the extraordinarily high level of corruption that now permeates just about every government department, agency and corporation, including the SPVs. By the way, try not to forget to pray for your fellow Bahamians in Abaco and Grand Bahama, even if you happen to be another one who believes righteousness alone will help them prevail.