Insight: So, They Think We’Ve Got Problems 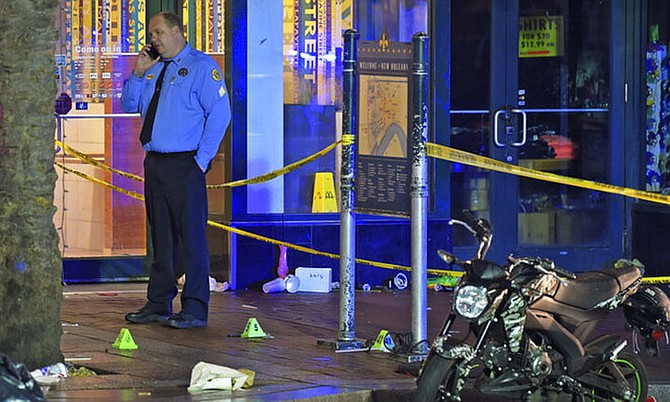 New Orleans police investigate a shooting on Sunday where 10 people are understood to have been wounded. (Max Becherer/The Times-Picayune/The New Orleans Advocate via AP)

AS we approach the holiday season, many Bahamians have been travelling to the United States to celebrate Thanksgiving and partake in the Black Friday sales – with more likely to travel for Christmas to see family. But as our fellow countrymen and women embark on these trips, should the government consider issuing a warning to beware of gun violence in the US? Certainly, it is something that we should, at the very least, have a discussion about?

As our neighbouring country, the US has been no stranger to issuing travel advisories to its citizens heading to The Bahamas. While there have been some instances of crimes against tourists, by and large, the overall numbers in the broad picture are marginal. It is safe to say, that for the most part, tourists visiting The Bahamas and are marginally affected by crime.

In the wake of Hurricane Dorian we need all the help we can get to help pay for reconstruction and the chief way to can do that is through tourism. While we are grateful for all of the assistance from the US in the aftermath of Dorian, travel advisories and fear-mongering only succeed in hampering our ability to do just that. Even if it is just the case of reissuing the same advisory we’ve seen many times before, it is often picked up by US and other media and could potentially scare off tourists planning to come here.

Imagine it was the other way round and we were to examine how safe we should feel as visitors from a predominantly black nation in the US. Led by a president whose anti-immigrant rhetoric has at times been unconscionable, racial tension in the US is as high as it has been in the past four decades.

With police-involved killings of unarmed black men being 2.5 times more likely to occur than it is for a white person, according to research from the City Lab, Bahamian men of a similar hue must be very aware during their holiday travels. To a lesser degree, black women still face similar danger of being shot by a police officer - nearly 1.5 times more than a Caucasian. While there may not be a lot of data justifying the potential danger faced by Bahamian tourists in the US, there is undoubtedly increased racial tension since the 2016 presidential campaign where hateful rhetoric towards immigrants were the order of the day. Such anti-immigrant rhetoric has been believed to fuel the attack on a Bahamian man in south Florida earlier this year – a rare, but no less frightful incident.

However, if we were to take a long look at US history, one can argue that the chickens are coming home to roost.

The US, the world’s reigning superpower, is not devoid of systemic issues. The dysfunction underneath the surface of a society built on cruelty towards people of African descent is now bursting at the seams, with mental health issues being at an all-time high. Nowhere is this more prevalent than in the trend of mass shootings that occur at a feverish clip in the US. Just yesterday in one incident in New Orleans 11 people were wounded in an early morning shooting.

Since 2016, the US is projected to have the most mass shootings in recent history – averaging more than one a day. Perhaps most nerve-wracking is the inability to prevent such tragic ordeals before they occur as there is little rhyme or reason to them. With President Trump’s refusal to attack gun control or view the issue as domestic terrorism, many US citizens have been sitting ducks when these acts of violence take place.

These are absolutely horrifying statistics.

And despite studies indicating stricter gun laws lead to fewer gun-related deaths, the US still has the weakest gun control legislation in the developed world.

It becomes even scarier when we examine where these incidents have occurred. While a school may be the first place a person thinks about when a mass shooting takes place – a trend since the Columbine massacre – these spontaneous acts have also occurred in nightclubs, shopping malls and parking lots – areas where Bahamians travelling abroad frequent.

There is no US state immune to the bloodshed as a result of mass gun violence.

This begs the question, as we send our kids to attend American universities and we travel to the US fanatically, should we not, at the very least, ask our citizens to move with a modicum of caution? As a sovereign nation, we would be in our full right to do so.

Whether the government were to take such a bold stance amid its desire to remain in the good graces of the US or not, allow this to be a clarion call for fellow citizens travelling this holiday season to do so with care. If this year has taught us anything, it is that life can change with neck-breaking quickness.

While we examine all of this, the reality is that despite the facts presented, our politicians do not seem to have the fortitude necessary to take such a bold step, as consequences may not be politically expedient. However, hopefully this can lead to discussion among the populace, particularly as the US heads towards what will likely be an emotionally charged election year.

The priority must always be to ensure the safety of the Bahamian people, whether at home or abroad.

I remember the scene at the Ft Lauderdale airport. the people were all walking along the man turned and shot one or two of the people. how safe is that.??

Americans also have the right to bear arms. then Wal Mart which Bahamians love persons were gunned down

Agreed. The chickens are coming home to roost. However, does the following statistic not stand out? Homicides per 100,000 people: The Bahamas 30.9 The US............5.3 Isn't this the way we compare things, by percentages? Sometimes we forget that the country of The Bahamas is the size of a small city in the US. If all you watch are the major TV networks, then you could easily get the impression that there are really comparisons. There are some, but they are not flattering.