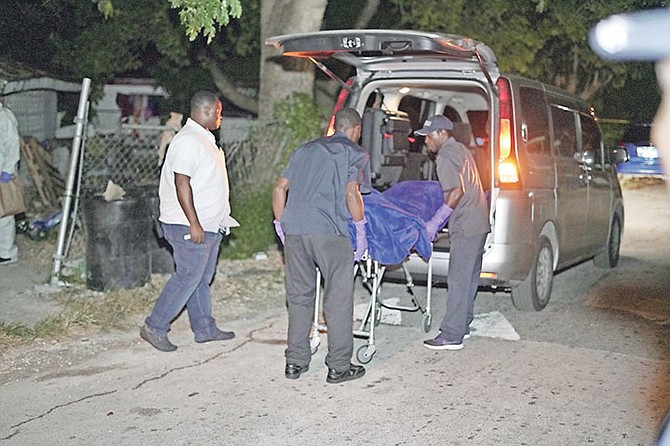 The body is removed from the scene. Photo: Terrel W Carey Sr/Tribune staff

A MAN was fatally shot Monday night after an argument with another man at a home off Carmichael Road turned deadly, police said.

At the scene, Supt Shanta Knowles said the incident happened shortly after 6pm, when two men were at a residence on Dominica Way and got into an argument. One of the men left, then returned with a gun and shot the other man before escaping, she said.

“We are speaking to people in the community and witnesses who are giving us information as to his correct identity, and of course we have a team of officers in search for him (the shooter),” Supt Knowles said.

Grieving relatives screamed in anguish at the scene, suggesting the killing was a result of a domestic dispute connected to a woman the victim knew.

“The blood that was spilt, I promise you, that in the name of Jesus from your bloodline go up, under the sound of my voice, who spill my brother’s blood will pay from now on ‘til every generation ‘til you are wiped out of this earth completely.”

Another relative said a “wicked” girl had called her brother to the house where the shooting occurred.

A neighbour told reporters at the scene that she had warned the victim previously about dating a “young lady” in question, but he didn’t listen to her.

A relative identified the victim as Brian Evans Jr, 29. The killing pushed the murder count to 92 for the year, according to The Tribune’s records.

Anyone with information on this killing is asked to call police at 502-9991 or Crime Stoppers at 328-TIPS.