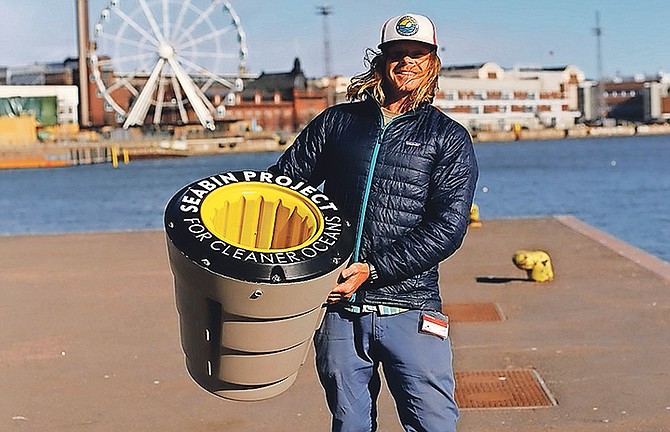 ATLANTIS resort yesterday celebrated the launch of the first Seabin installed in The Bahamas, which aims to reduce ocean pollution.

Michael Neff, Butterfield Group executive, told reporters he was pleased to be present for the inaugural launch of the project.

Seabins are floating devices that take in ocean water, filter it through a catch bag and collect litter and debris in the process.EN-GB

Mr Neff said: “Ocean plastic pollution as you all know is a huge problem for our planet. Butterfield operates in jurisdictions, in about 10 jurisdictions that are all islands. Islands and waters that surround islands are really important to us. And we feel it is really important to help back organisations that are trying to address the problems that create the pollution in the oceans and so this kind of tools keeps the garbage from getting out.

“We sponsor ones in the United Kingdom, in Bermuda, in Cayman, out here in the Bahamas, Canada as well part of our launch as the initial partner today there are 860 of these Seabins around the world.

“They collect every day about 3,600 kilos of garbage so it really is an important part of trying to arrest an significant problem it is admittedly a small part but also part of it is getting the message out there that this is a really serious problem that needs to be addressed.”

He continued: “So, we are really pleased that the first installation here in The Bahamas is actually at Atlantis. Because it’s not only the local folks will see it but people from all over the world that come to this incredible resort will see that. ...Atlantis plays a role and Atlantis is as committed as we are to this kind of thing so it’s a great partnership. We look forward to doing more and more of this across the globe and that’s Butterfield’s goal in all of this.”

When asked about the price tag of this initiative, Mr Neff said the initial investment was both in the Seabins itself along with promotional cost.

“We do spend a good deal of money I don’t know the exact figure but it is one of our lead group enterprises which is where we intend to invest our most money is in things that cut across the entire group and we are committed to this project for a number of years. So, again it is very important to us,” he explained.

“The overall project has been quite successful, and we play a small in that, so we have our eight facilities, but I think it’s suggesting it’s not only that you are doing it but its the message that you send. It’s the awareness you create. I’ve spent some time with the founder of this.”

“As you know we are fully engaged in working toward a green environment with our recycling with our water plastics, our single use plastics (and) recycling of oil. The marina here of course is a blue flag marine and so this is just a natural continuation of what we are all about. Hopefully, we only had this in the water for a couple months now,” he said.

“Once we see how effective it is and we already know how effective it is. We’ll look at putting them in other locations in the marina as well as some other marina we have in Paradise Island. Again we are very grateful for introducing us to this product and I think we are going to take charge and thing is Michael it’s a big task but all the little things add up to a big thing so we are very happy to be a part of that.”

Mr Fields added: “The thing about ocean garbage is it keeps coming and while you can have daily manual clean-ups once, twice, three times a day (the) reality is it keeps coming. It comes at night, it comes (in the day) day so what’s good about this is it’s constantly collecting the garbage.”