Face To Face: Bind Us Together – How Marsha Poured Her Energy And Effort Into Building A Safe Place For Battered Women

Often when one decides that they want to make a difference in the world, they get involved in some kind of club or NGO… maybe a church’s ministry outreach programme. They find a way to engage with others in something that is already established, where the wheels have already been set in motion. Not Marsha Hadassah Curry. She made her mark on the community in the same way she lived her life – marching to the beat of her own drum.

Marsha, better known as “Dassah” to her loved ones, poured her energy and effort into building a safe place for battered women. She built it from the ground, up. She did it without asking the government or corporate Bahamas for a major grant of any kind. She went to the everyday man and asked for $14.50. The reason she asked for this amount was because it was enough to purchase one piece of plywood. 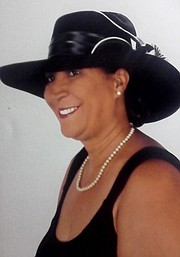 She told people that $14.50 represented about the same amount they would spend on lunch. She asked them to skip lunch if they had to, for just one day, to donate to her cause. She went all around New Providence and Eleuthera asking for the donation, so much so that she gained the nickname “14.50”. You could hear people calling out the amount as she approached them; she responded with a big smile and the latest update on her dream – “Hadassah’s Place”.

Hadassah’s Place is located in Eleuthera, the island that Marsha decided to migrate to when she left Nassau, doing what seems to be impossible for some. She retired at the age of 50. She got a crown land grant and started the building. She proudly posted the construction process on Facebook. This gave her an outlet to be accountable to all the people who supported her dream. Marsha completed the building’s structure, and placed hardly plank on the outside for a beautiful finish. Her next step – complete the inside of the building by creating bedrooms for battered women, including those with children, to escape to. The plan was to give the women a chance to recuperate in a serene island environment, expose them to professionals who would help them to get their life on track, and bring in teachers who would share various skills to help them create means of income for themselves.

The reason why she chose to focus on battered women and their children, is because she had met so many in her career. As a beautician and barber, Marsha came across women who would confide in her about the horrors they were going through at home. Coming to the salon to be dolled up was an escape for them. Marsha’s magnetic personality caused them to draw to her and let her know all they were going through. She met women from all walks of life who were facing various types of abuse at home. Many of them could not see their way out; there was no escape for them. If only they had somewhere to run to in order to get out of the volatile situation, they could make a better life for themselves. For this reason, Marsha decided that she would build a safe home for women like them when she retired. Eventually, she left the hustle and bustle of the capital and traded her scissors and clippers for balmy breezes and sandy beaches. She built her home there, and then turned to her next project, Hadassah’s place. The project brought her a lot of joy and a sense of fulfilment. She felt as if she would have a great influence on the women who would seek refuge at her shelter; her bold personality was something to be emulated. Marsha would tell you that she gained success only on “mother’s wit” and that if she were more educated, she would be “leader of the free world”. 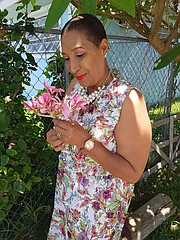 However, Marsha fell ill before she could see her dream come to full fruition. She ended up travelling to her daughter in Florida to seek medical care as she battled with cancer. She was surrounded by loved ones who took care of her as she dealt with her chemotherapy and radiation treatments. Her daughter Karla, son David Jr, son-in-law Tim and grandchildren provided the loving care and support she needed. She was also cared for by her one of her best friends, my aunt Elizabeth (Beth) Ingraham-Davis. She and her husband Jeffrey Davis provided moral support as well as spiritual support for her. They shared many happy moments which helped to make the burden light.

Marsha would tell Beth: “Get the pots going! We are going to have a party!”

Hadassah’s Place, a home in Eleuthera for battered women.

“She ate very little, but she wanted to know she had food there that she liked,” said Aunt Beth.”

On November 23, 2019, Marsha was called home, as Bahamians would say. Marsha touched many lives and knew many people. Her friends often joked and called her “a professional funeral-goer, because it seemed that nearly every week she was attending someone’s funeral. She was also known for openly crying and expressing her grief. In some ways, it was a show of respect for those whom she touched and who touched her along the way. As fate would have it, her own death will bring people together not just once, but twice. On December, her first memorial was held Fred Hunter’s Memorial Home in Hollywood, Florida. It was a beautiful, unconventional service, because there was no specific order. She was beautifully laid out; her family and friends came forward as they felt the spirit and gave testimonies of the joys they shared with her on Earth. Uncle Jeffrey raised familiar hymns and at the end, they all joined hands in a circle and sang the hymn “Bind Us Together”. Her funeral in New Providence this past Saturday at Epiphany Church at 11am in traditional Anglican style.

It is significant that Marsha died just two days before the International Day to End Violence Against Women and Girls. Her memorial and her funeral were held during the 16 Days of Activism against gender-based violence. Her tribute is in todays paper – the day before the end of the 16-day campaign, which culminates on International Human Rights Day. Her efforts to do something about it are a testament to the kind of passion we should all have for the causes we believe in. Last week, I looked at the Zonta Club and work that these Bahamian women have been doing in the 16 Days of Activism for the past seven years.

“Marsha truly had a personality that was larger than life and anyone that met her instantly became a well-loved friend,” her memorial booklet reads.

“There was no one that she would not help; whether it was providing a meal, shelter, a kind word or even just a smile. Marsha identified a need within the community where women in distress were underserved. That became her life’s passion, and Hadassah’s place, incorporated in 2017, was born.”

Marsha’s son DJ, far right, looks so proud of his mother and the love she shared with the world.

“She was always creating laughter and fun times for everyone,” says Beth, “She was so positive and upbeat even when she was dying.”

“I remember in the last week we spent together, she had me answering her phone: ‘Mrs Curry’s office!” People would laugh and say she has a secretary now!”

She lived a colourful life. She obtained a farming licence and had successful crop sales. She was an avid political supporter, and she was trampled at a protest held Downtown, where she suffered a broken shoulder.

Marsha is survived by her mother, Inez Eloise, her husband David Curry Jr; their children: Karla, David, D’arvid, Daavan, Davado, Nathan and Isnell. She is also survived by her grandchildren, siblings Lawrence, Prenetta and Jemma, and a host of other relatives and friends. She is a graduate of LW Young high school, and she travelled to Atlanta to become certified in cosmetology.

A very heart- warming story. My her precious soul rest in peace.