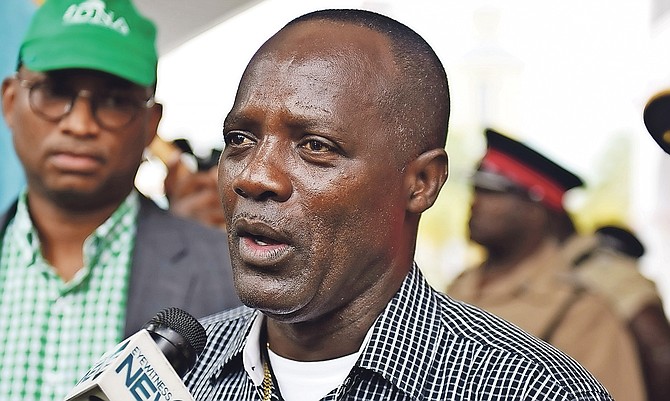 Mr Ferguson, in an affidavit filed last week Tuesday, accused NCTUB president Bernard Evans of acting in concert with “disgruntled” BPSU members to “engineer” a “plot” to jeopardise his election bid in the NCTUB’s upcoming election.

That alleged conspiracy extends to a woman named Latoya Cartwright, who Mr Ferguson claims similarly stands to have her candidacy for NCTUB fourth vice president jeopardised as a result.

Mr Ferguson said given the “increasingly disruptive behavior” of the disgruntled BPSU members, which is a matter of record and a matter he has a “firm handle” over, he was not bothered initially. However, he said he became “concerned” when he was told that Mr Evans said he was prepared to refund payments made by the BPSU to the NCTUB to “artificially and deliberately” compromise the BPSU’s standing as a NCTUB affiliate.

Additionally, Mr Ferguson claims Mr Evans said he would cooperate with the “plan” upon receipt of a “letter from a lawyer”.

Mr Ferguson claims his members’ suspicions were “confirmed” when he received copies of two letters, issued by attorney Maria Daxon and addressed to Mr Evans and NCTUB Treasurer Lavern Pople, in which Ms Daxon “falsely asserted” she had been retained by the executive board and trustees of the BPSU.

Ms Daxon has since confirmed to The Tribune that she does in fact represent the executive board and trustees of the BPSU.

Nonetheless, Mr Ferguson said Ms Daxon, without “reasonable or lawful authority”, purported to request a return of funds duly paid by the BPSU to the NCTUB. And he asserts that the “singular objective” was to “harm BPSU by damaging its status as an affiliate of the NCTUB” in an attempt to compromise his and Ms Cartwright’s respective candidacies.

The first of the two letters, titled “Reversal of Affiliation Fees” and sent from Ms Daxon’s firm, is purported to have referred to a letter dated October 30 that was written by Mr Ferguson concerning a payment of $12,000 to the NCTUB that was transferred on two separate dates: October 24 and October 30 of this year.

That letter said the BPSU’s executive board and trustees were never consulted about those payments and that the payments were thus made “without the board’s knowledge and authorisation”. The letter went on to say that the executive board was thus requesting that the $12,000 be “immediately” returned to the BPSU’s account at Scotiabank.

Mr Ferguson claims that upon receipt of Ms Daxon’s letters, he immediately contacted the BPSU’s attorney, Kahlil Parker, who subsequently wrote a letter to Mr Evans dated December 2. In that letter, Mr Parker requested that Mr Evans “disregard” Ms Daxon’s demand for the refund of monies, and that the “status quo be maintained” to allow his legal team to “approach Ms Daxon directly in order to determine the source of her purported instructions”.

Mr Parker further requested that as the entire issue is an “internal” matter, no steps be taken “so as to prejudice the interests of the BPSU and the status of its affiliation with the NCTUB in the absence of an order of the Supreme Court”.

Conversely, Mr Parker warned Mr Evans that any steps taken to the prejudice of the BPSU and the status of its affiliation with the NCTUB would be met with litigation.

Notwithstanding Mr Parker’s letter to Mr Evans and the NCTUB however, Mr Ferguson insisted that there was a risk that the NCTUB would seek to “interfere” with his and Ms Cartwright’s union bids. He asserted that if the NCTUB were allowed to conduct the election without his and Ms Cartwright’s participation as “duly nominated candidates”, the pair would be “unlawfully and permanently deprived” of their right to “contest those elections as we had planned”.

Mr Ferguson went to claim that he was called into a meeting with Mr Evans on December 3, at which time the NCTUB chief told him that the NCTUB had decided to return monies duly paid by the BPSU and that as a result, the BPSU would no longer be in good standing with the NCTUB “so as to entitle (Mr Ferguson and Ms Cartwright) to stand for election to the positions of first and fourth vice president of the NCTUB, for which positions we had already been duly nominated”.

However, Mr Ferguson asserted that the NCTUB is not entitled to “unilaterally” return the funds in question, and neither has the NCTUB received a lawful request or demand from the BPSU for repayment of the funds in the circumstances.

As a result, Mr Ferguson petitioned the Supreme Court for an injunction to have the NCTUB election postponed pending further or final order should the NCTUB purport to conduct the elections without his and Ms Cartwright’s participation.

On December 3, Mr Ferguson’s application for an injunction was granted, as the Supreme Court barred the NCTUB, its servants, agents or officers from conducting or purporting to conduct its elections or otherwise without Mr Ferguson’s, Ms Cartwright’s and the BPSU members’ participation until 5pm on December 6.

The Tribune understands that has since been extended to December 30.