Teams Of The Year In The Spotlight 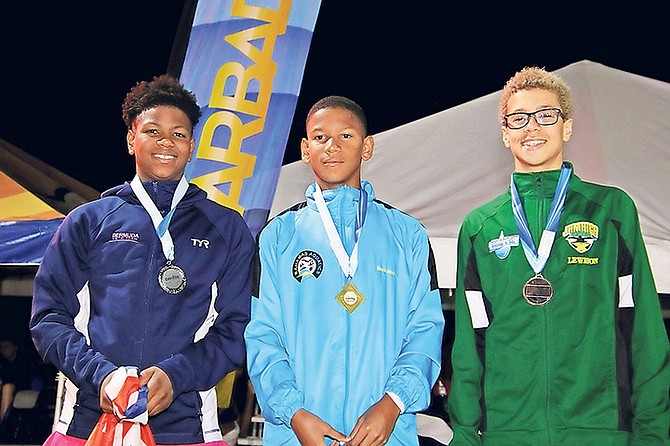 IN the disciplines of swimming and water polo, the Bahamas continued its dominance in the region at the 34th CARIFTA Aquatics Championships.

The Bahamas’ 2019 CARIFTA swim team had made history on several fronts with its third straight championship title and fifth in the last six years. They topped the points standings, with 889.50 overall points and also won the most medals in meet history with 73 at the Barbados Aquatics Centre, in Wildey, Barbados.

Marvin Johnson emerged as the story for team Bahamas with one of the most awe inspiring performances in meet history. He led the way with 10 individual gold medals and 14 overall to win the High Point trophy in the 11-12 boys’ category.

Izaak Bastian was also a top performer for the Bahamas with eight gold medals and six record breaking performances, three of which came on the boys’ 15-17 relay teams that left their marks in the history books.

Individually, Bastian established games’ records in the 50m Free, 50m Breast and 100m Breast. He also got gold in the 50m and 200m Fly.

Bastian was also was awarded the highest FINA points Swim of the Meet in the 50m breaststroke in 28.20, which was also a World’s B qualifying time.

In Water Polo, team Bahamas won gold in the U16 Boys, silver in the U14 Co-Ed and bronze in the U19 Boys.

Jayden Seymour was named the top goalie in the division for the gold medal winning U16 team. It was his late game defence that sealed the win for team Bahamas in a 12-11 win over Trinidad and Tobago in the tournament finale.

The country’s top quarter milers highlighted team Bahamas’ appearance in Doha, Qatar, but those two will get to dominate every other “end of year” list in publication. I think they’ll be ok giving this one up.

Steven Gardiner won the gold medal in the Men’s 400m in a time of 43.48 seconds. He lowered his previous national record of 43.87 established on May 4, 2018, also in Qatar. It was the eighth time a Bahamian won gold at the World Championships – and the first since Donald Thomas triumphed in the men’s high jump in Osaka, Japan, in 2007.

Gardiner, 24, became the Bahamas’ first male multiple individual medallist at the World Championships as he duplicated his feat that he first accomplished in London, England, two years ago (2016).

Shaunae Miller-Uibo won silver in the Women’s 400m and simultaneously earned a North American, Central American and Caribbean (NACAC) area and Bahamian national record of 48.37 - the sixth best in history.

At 25, she became the first Bahamian athlete to clinch three individual medals at the World Championships. Her initial medal came in 2015 in Beijing, China, where she earned the silver in the 400m followed by bronze in the 200m in 2017 in London.

Tynia Gaither Gaither finished eighth in the 200m final in 22.90. She attempted the double but was eliminated in the semi-finals of the 100m. She finished in fifth place in the first of the three semis in 11.20.

Anthonique Strachan was unfortunately injured in her 200m semi-final and was unable to advance.

Donald Thomas failed to advance to the final of the high jump with his clearance of 2.22m.

The men’s junior national basketball team advanced to the 2020 FIBA Tournament of the Americas with their historic bronze medal at the FIBA Centrobasket U17 Championships.

The Bahamas sealed their place in the field in dramatic fashion with an 85-83 win over the Dominican Republic in the Centrobasket bronze medal game at the Roberto Clemente Coliseum in Puerto Rico.

Romad Dean rebounded a missed layup and followed with a dunk that gave the Bahamas the historic win, the bronze medal and the Tournament of the Americas berth.

Dean finished with a double-double - 18 points and a game-high 13 rebounds.

The Bahamas opened the tournament with a 75-70 loss to host country, Puerto Rico. They followed with an 86-57 win over El Salvador and an 89-76 win over the US Virgin Islands to advance to the semif-inals. They suffered a 64-48 loss to Mexico in the semifinals and were placed in the bronze medal game.

Mexico went on the win the event and Puerto Rico took silver.

Albury led team Bahamas in scoring at 19.4 points per game while Dean averaged a double-double with 14.2 points and 11.4 rebounds per game.

Oswald Meadows led the team in assists at four per game, while Albury also led the team in steals at 3.4 per game and Pinder was the top three-point shooter at 48.3 per cent.

The date and location of the Americas Tournament have yet to be announced by FIBA, but the Bahamas will face Argentina, Brazil, Mexico, Puerto Rico, Uruguay, Canada and the United States this summer when the tournament tips off.

The top four teams at the Tournament of the Americas will advance to the subsequent U19 Basketball World Cup.

The Bahamas returned to regional competition in the CONCACAF Nations League and emerged as the top group team in League C, Group B.

The Bahamas finish as group winners with 10 points, and earned a berth in both League B and the 2021 Gold Cup qualifiers.

With a 1-1 draw against Bonaire at the Ergilio Hato Stadium in Willemstad, Curacao, the Bahamas emerged as the top group team in League C, Group B.

They began the series when they defeated Bonaire 2-1 at the Thomas A Robinson Stadium back in September, the first game of the home and away series.

Happy Hall got the all-important first goal of the day in the 49th minute, heading home a rebound past the fallen keeper.

Cameron Hepple added insurance when he doubled the Bahamas’ lead in the 78th minute.

The Bahamas topped the British Virgin Islands 4-0 on October 9 at Warner Park in Basseterre, St Kitts and Nevis. Lesly St Fleur scored a pair of goals (37’, 49’), Hall (55’) added the third and Quintin Carey (81’) scored the final goal late to cap the scoring.

The Junkanoo Boyz returned home on November 14 with a 3-0 win over BVI. Team Bahamas struck early when Isiah Collie scored in the ninth minute.

St Fleur would tack on another score less than two minutes later for a 2-0 lead and Carey added the final goal for the home team in the 35th minute. They closed out the stage with a 1-1 draw against Bonaire at the Ergilio Hato Stadium in Willemstad, Curacao, to solidify the top spot in League C, Group B.

Twelve sides will advance to the 2021 Qualifiers and the Bahamas is placed in Group C. The qualifiers will determine the final four teams to qualify for the 2021 CONCACAF GOld Cup.

Defeating powerhouse Jamaica has seemed virtually impossible in recent years, but the Bahamas topped the remainder of the field.

Once again, regional powerhouse Jamaica topped the medal standings with 85 in total, including 36 gold, 33 silver and 10 bronze.

On the field, Keyshawn Strachan won gold in the under-17 boys javelin throw, setting a new CARIFTA record with a mark of 64.31 metres. The old record was 64.01m, set by Anderson Peters in 2013.

On the track, Jasmine Knowles surged out of the gate and led the entire race to win gold in the under-20 girls 800 metres, finishing in a personal best of 2:09.49.