Anthaya our Junior Female Athlete of the Year 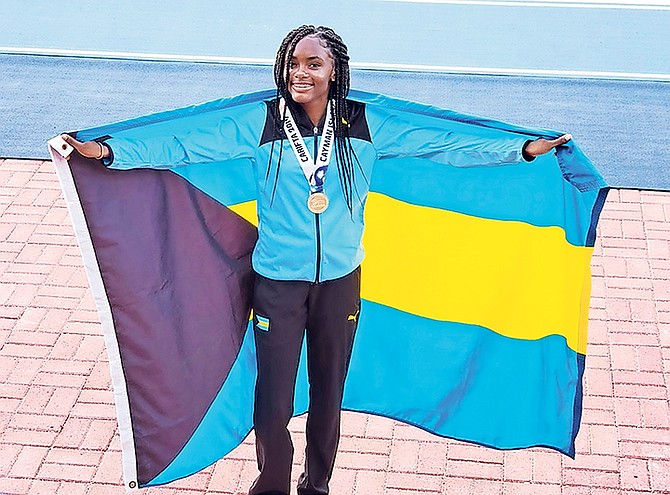 FROM the regional CARIFTA Games to the international stage at the North American, Central American and Caribbean (NACAC) Under-18 and Under-23 Championships, Anthaya Charlton had one of those sterling performances that enabled her to easily earn The Tribune's 2019 Junior Female Athlete of the Year award.

The versatile St Augustine's College 16-year-old track and field athlete's performance outshined that of a number of rising young stars, including top tennis player Sydney Clarke, who excelled on both the local and international scene.

What topped the scale for Charlton is the fact that she secured medals and even a bit of history in just about every competition that she competed in this year as the sprinter/hurdler/long jumper, coached by her father, former national 400m record holder Dave Charlton, surpassed feats achieved by her older sister Devynne Charlton at the same stage in her career.

Unbeaten all season long on the local scene in the under-17 division for the Star Trackers Track Club and SAC's Big Red Machine, Charlton took her talents to the CARIFTA Games in George Town, Cayman Islands in April where she claimed gold in the under-17 girls 100 metres and the long jump and a bronze in the 100m hurdles.

The latter performance left her as the bridesmaid for the coveted Austin Sealy Award as the most outstanding athlete at the meet as the Bahamas finished second behind powerhouse Jamaica in the final standings with nine gold, seven silver and 10 bronze.

At the NACAC Championships in Santiago de Querétaro, Mexico where her mother, Laura Charlton, served as the team manager, Charlton soared to a gold medal in the under-18 girls long jump as she finished fifth overall in the joint team competition with three gold, four silver and one bronze.

Had it not been for the medals from personal best performances, Charlton could have found herself trailing local tennis phenom Sydney Clarke for the overall spot. However, Clarke missed out on the top spot because her account of achievements were a little shy of eclipsing what Charlton did.

As she closed the chapter on her junior career and opened the pages of what promises to be a rewarding collegiate and senior campaign, 18-year-old Clarke dominated the local scene and was seeded as the top player in every tournament she competed in on the International Tennis Federation's Junior Tour this summer.

For her efforts, she earned an ITF junior ranking of 711 and was awarded a full scholarship to attend the University of Alabama at Birmingham (UAB) Blazers in the fall.

She completed her year by relinquishing her title a week ago to Kerrie Cartwright in the women's final of the Giorgio Baldacci National Open Tennis Tournament where she also earned her third appearance on the Fed Cup team as she prepares to make her trek to Panama in April, adding to the trips she made last year and in 2017 on the biggest stage for team competition in the world in the sport outside of the Olympic Games.

At the age of 17, Megan Moss is hoping that her freshman year at the University of Kentucky under the tutelage of Bahamian head coach Rolando 'Lonnie' Greene and assistant "Golden Girl" Debbie Ferguson-McKenzie will secure her a spot at the 2020 Olympic Games in Tokyo, Japan.

The St Augustine's College 2019 graduate was primed to go to the CARIFTA Games and win another medal in the 400m, this time in her debut in the under-20 division as she posted a lifetime best of 53.06 to top the IAAF chart. But a nagging injury that led to a fifth place negated the individual podium appearance, but she got one for the silver as she anchored the 4 x 400m relay team.

She ended up with the honourable mention for The Tribune's Junior Female Athlete of the Year award along with CARIFTA gold medallists Rhema Otabor in the javelin with a record throwing feat of 43.07m and Jasmine Knowles in the 800m in a championship record of 2:09.49, basketball player Michelle Butler, in leading the Bahamas to a sixth place finish at the FIBA Americas Under-17 Centrobasket Championships with an average of 16.4 points and 11.6 rebounds per game and Elana Mackey, a tennis player who is now making a name for herself, going undefeated in her freshman year at the University of the Bahamas in cross country running.

All the honourable mentioned athletes are 17 years old, which bodes well for their future.