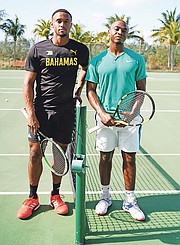 THEY haven't played against each other since they were juniors. But now that they are all grown up and playing on the professional circuit, Justin Roberts and Kevin Major Jr are reuniting to play together for the first time as members of the Bahamas' Davis Cup team.

In preparation for the Americas Zone III tie in April, the duo came together for their first practice on Christmas Eve at the National Tennis Centre. While they are home through the holidays, they intend to work out a few more times to get reacquainted with each other.

The duo, along with Baker Newman, were the first three selected to represent the Bahamas on the Davis Cup team. Roberts, by virtue of his International Tennis Federation ranking, got an exemption from playing in the Giorgio Baldacci National Open Tennis Tournament last week.

In the process, Major Jr won the men's singles title over Newman.

"It's good. It's nice," said Roberts, who indicated that he's only been here about 3-4 times because of his hectic school and pro schedule. "It's nice to be reunited with family and friends and to be able to get ready for next year."

Having taken the last three weeks off from playing, Roberts said it was good to be back on the court, especially with Major Jr on the other side of the net.

"The ball felt good, so it was a good little practice," said Roberts, who is currently ranked around 767 in singles with 21 points.

The feeling was mutual for the 24-year-old Major Jr, who used the opportunity to gain some knowledge from Roberts at the same time. "We're kind of close so it's nothing irregular," Major Jr said.

"I think it's more me kind of settling in and being able to play a little more and winning bigger matches. He's kind of figured it out, but I'm now starting too, so we can collaborate with each other."

Roberts, who turned 23 on December 4, noted that it's even better knowing that he can finally get to play on the Davis Cup team.

"It's been a big goal of mine for years to play Davis Cup," he said. "I am finally going to get to do it, so I'm really excited. "I look forward to the challenge next year."

With Roberts now on board, Major Jr said that they are going to have a lot of fun next year.

"I've lost a lot of pressure after winning the tournament," Major Jr reflected. "I'm now motivated than ever to get out there and play. With Justin on the team, I feel we can do a lot of damage in both singles and doubles with Baker Newman also on the team."

The BLTA is going through a transition and could be looking at the heir replacement for the former players on the team like Mark Knowles, Roger Smith, John Farrington, Sean Cartwright, Marvin Rolle, Devin Mullings and Bjorn Munroe, just to name a few.

"Being compared to those guys are pretty incredible," said Major Jr about taking up the mantle. "I'm just taking it one day at a time. I know what we're capable of doing. We just have to execute. The tide is changing for tennis in the Bahamas and we are starting to get more recognition because we both have been performing well for the Bahamas that people can't help but notice."

With the team being assembled, Major Jr said he and Roberts are looking forward to getting in some practice time together and once they do, they should be ready to play. By the way, Major Jr is ranked around 1,169.

"In singles and doubles, I think we're going to be a very tough team to play that day," projected Major, who claimed that he didn't take any time off to celebrate his victory at the tournament because he wanted to ensure that he stays physically fit for 2020.

Although he was not at the tournament, Roberts said he followed the draw and was quite impressed with the performances of all of the players who participated, especially Major Jr and Newman for competing in the finals and earning their berths on the team.

"I saw KJ play this summer and I saw his improvement, so I wasn't surprised at his performance," Roberts said. "He ended up winning the tournament. But Baker Newman also played very well during the tournament. There's also the veterans like PJ (Philip Major Jr) and (captain) Marvin (Rolle).

"It was good to follow the draw. I enjoyed the scores. It was good to see the young guys making their presence felt too. I think it was a good tournament. I wasn't here, but I liked what I saw and I'm looking forward to playing with the guys next year."

Even though there's still one more spot to fill before the team is officially named and gets set to travel to play at a site yet to be disclosed in April, Roberts said with the make-up so far, the Bahamas has the potential of being one of the teams to advance to Zone II.

"We have some good players and we have the depth, so I think we have a really good chance to advance," Roberts projected. "We hope to go and do some damage."

Both Roberts and Major Jr will be home until the middle of January.

Now that he's officially done with school, having completed his graduate studies at Arizona State University earlier this month, Roberts said he intends to move to Texas in January to begin training under a new coach, Taylor Dent, a former top 20 ranked American player in the world.

"I will have a three-week pre-season training in January and begin playing full -time in February in Mexico," he revealed. "The purpose to play the professional tournaments while I was in school was to prepare me for playing full time on the circuit. "It exposed me to what I like and what I don't like. I can adjust to the circuit and what I have to do and what I don't need to do to be successful."