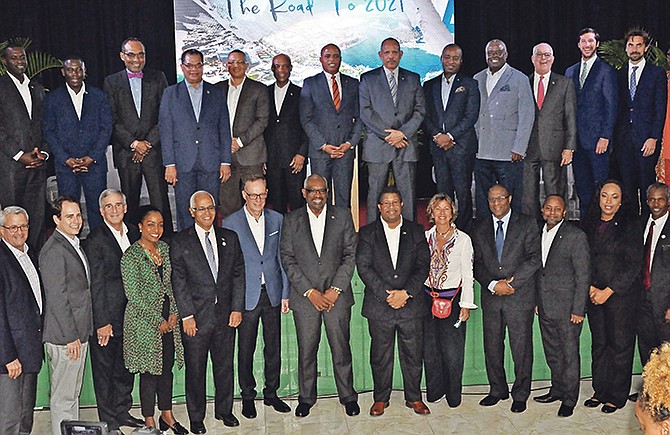 PRIME Minister Dr Hubert Minnis and members of his Cabinet attended an information meeting in Grand Bahama last night for Carnival’s proposed “Grand Port” which is expected to create 1,000 direct and indirect jobs during development.

Hundreds of residents attended the event last night at the Foster B Pestaina Centre to hear of the available opportunities for the project which is being touted as an economic engine that will jumpstart the island’s economy. Carnival Cruise Lines has purchased over 300 acres in East Grand Bahama in an area known as Sharp Rock for the cruise port, which will be the largest in the world of any of their ports now.

Dr Minnis said the port will serve as a significant catalyst for Grand Bahama’s flagging economy, adding the port will make the island the largest in the cruise destination in the Caribbean region.

Officials are in the process of starting an environmental impact assessment on the project. Of the 329 acres that will be used for the development, 110 will remain untouched and preserved as a wetland, officials said.

“The economic revival of Grand Bahama is critical in the economic revival, growth and expansion of the Bahamian economy,” Dr Minnis said last night, adding the government is close to selling the Grand Lucayan resort, which was acquired temporarily by his administration last year to help save the island’s economy.

“We are also determined to transform Grand Bahama into a technology hub,” he said, adding the port will be state of the art and have opportunities for those in the tech industry.

Officials will meet Grand Bahama environmental groups, the island’s Chamber of Commerce and religious leaders this week to discuss the project.

doc should be ashamed of him self to announce a port that has been announced two\ times before and has changed the site for the Port three times,

The whole cabinet came to wine and dine at the expense of the Tax payers.

"The whole cabinet came to wine and dine at the expense of the Tax payers."

First thing that needs to be done is get both Hayward and St George crooks out of any authority as they are leaches. They have destroyed Freeport with their greed and lack of reinvestment back into the island. Bunch of useless individuals parents rolling in their grave seeing how badly they ruined what they built.

So thankfully this project is east of the Port Authority's zone.

The only thing thinking Bahamians are interested in is Minnis "unveiling" the corruption of past PLP AND FNM administrations!

Dimwitted Minnis and his cabinet ministers are all working double time to try distract the press, radio talk shows and voters away from the Frank Smith acquittal and the impending Shameless Shane acquittal. LMAO

Two years to ramp up from scratch, Carnival said they only have a proof of concept at this point. Still, for an Island with nothing, at least this is something. Be interesting to see what tax concessions the Government gives besides the H.C.A.

As I recall, the whole cabinet came to Abaco in the last administration to have a cabinet meeting... less we forget. I guess it was ok then huh? Brave made it clear it was a PLP project, to bad they didn't follow thru on it, that is one of the reasons they have no seat here, nuff talk already time for action.