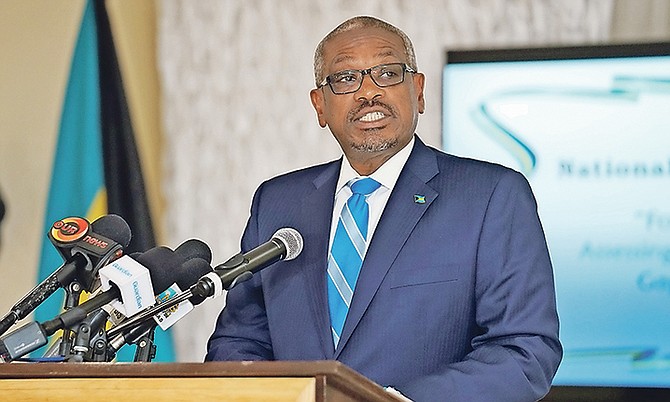 WHILE the government has received proposals from “quite a number” of investors interested in Grand Bahama, it remains unclear what the future holds for the controversial Oban deal.

Prime Minister Dr Hubert Minnis yesterday declined to comment on the proposed $5.5 billion oil refinery and storage terminal for Grand Bahama, telling reporters the matter was not on the radar for his Cabinet briefing on the island.

When asked for an update on the project, Dr Minnis said: “Listen I’m talking about futuristic - Oban is not…listen man, you hear me just open a project last night that I know gonna work. You hear I’m going to Cabinet today to discuss another project that I know gonna work. So I ain’t talking nonsense today, and don’t twist my words when you go on Cable 12 now.”

Cabinet ministers travelled to Grand Bahama to participate in a Monday night information meeting for Carnival’s proposed “Grand Port”, which is expected to create 1,000 direct and indirect jobs during development.

Addressing media ahead of yesterday’s Cabinet meeting, Dr Minnis reiterated his belief that the project will have a catalytic impact on the island’s flagging economy.

He hinted there were also several other projects on the drawing board for Grand Bahama for Cabinet to review; however, Dr Minnis brushed off reporters when asked for an update on the future of the oil refinery.

He also said: “We have several projects to discuss as it relates to Grand Bahama, to really take Grand Bahama a little further and all the Cabinet ministers were here (Monday) night. This would be the most appropriate place to have the Cabinet meeting especially to deal with Grand Bahama issues.”

Dr Minnis said: “Traditionally, the hardest thing in getting an economy started is trying to find that first investor and traditionally speaking, historically, once you find that first investor for some reason everything else just follows, you find lots of other investors subsequently coming. This morning we have to deal with quite a number of investors who want to invest in Grand Bahama, excellent projects.

“Some of what would be discussed today at Cabinet would be surprised, so I can’t tell you,” he told reporters asking for more details about prospective investors.

The Oban deal was inked by the government on February 19 last year and has been dogged by controversy.

Environmental organisations that took issue with the lack of an environmental impact assessment (EIA) given the project’s risk factors. There were also concerns about the background and qualifications of some Oban representatives.

The fallout prompted an admission from Dr Minnis last March that there were gross missteps in the government process.

Last month, Alexander Grikitis, president and managing director of operations at Oban Energies, confirmed that an EIA had been completed. He added Oban would be meeting with the government on January 7, however that meeting did not happen.

Asked yesterday when renegotiations will take place with Oban, Labour Minister Dion Foulkes said the government is in talks with the company’s new leadership team.

“There is a new president and chairman of the board, and we are in discussion with them to have fixture for a date to begin renegotiation for the HoA, but we have not settled on that date yet,” he said.

Yep. He's obviously got a very 'personal' horse in the Oban race.

When asked for an update on the project, Dr Minnis said: “Listen I’m talking about futuristic - Oban is not…listen man, you hear me just open a project last night that I know gonna work. You hear I’m going to Cabinet today to discuss another project that I know gonna work. So I ain’t talking nonsense today, and don’t twist my words when you go on Cable 12 now.”

Dimwitted Minnis lends new meaning to nastiness and arrogance. Apart from being devoid of common decency and civility, this man lacks even the most basic qualities necessary to be a leader. His inability to communicate without the benefit of rehearsal or in an unscripted setting speaks volumes about his powerlessness to think quickly on his own two feet. Small wonder he is stilted and without a coping mechanism for spontaneity, and therefore prefers to hide behind others like his press secretary, Ace. Only God knows how he ever got into, and then made it through, medical school. Just too frightening to fully fathom! LMAO

Yes, or no - is comrade prime ministerial Fishmonger Practitioner showing signs in public that he reached boiling degree being too stewed when tis become even that more obvious reporters be asking questions about what was the true intent behind fake Oban signature. Yes, no there is no need be making up such deepening weirdness Imperial reds governing ways?

Why is a company interested in building a refinery in the Bahamas? I believe that it's a combination of low taxes, unsophisticated environmental rules and enforcement. Nygard completed dredging in New Providence before anyone noticed. What hope do we have of protecting our environment from a much more complicated and well financed operation on a family island?

We aren't extracting any crude oil in our country. So what else makes the Bahamas attractive for this business? They could argue that it's a strategic shipping location. However why not build a storage and shipping facility instead and refine the product elsewhere?

I go on record as saying Oban is dead. This government has awoken from the stupor that they started of with the first two years.A whole cabinet meeting in Grand Bahama and Oban is not on the agenda. If the PM says"“Listen I’m talking about futuristic - Oban is not"…Thats a win for the envioronment, a win for the government wiseing up to the present day realities of investors who only see the Bahamas as a third world country where they could come pollute a whole island and laugh all the way to the Bank.

I trust with all of these comments all of you live here in Grand Bahama...and again there are 2 other oil refineries here, maybe you all should complain about those two existing ones as well. Not fair to just pick on just Oban when there are others here as well, what happen to those?

I live here in Grand Bahama and Oban is the stupidest idea put forth in years. It is a land grab dressed up as a 'project' as you will soon learn.