Together In Grief: Mass Turnout For Funeral Of Abaco Tragedy Victims 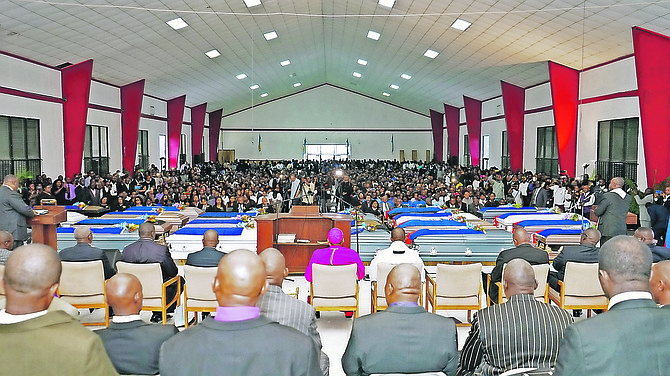 Inside the Enoch Beckford Auditorium on Carmichael Road on Sunday.

THEIR coffins draped in the Haitian flag and a bouquet of flowers, 22 Haitian migrants who were killed when their sloop shipwrecked in Abaco more than a week ago were mourned yesterday by hundreds who did not know them but who came to show empathy for the plight that brought them to their demise. The sombre ceremony was punctuated by loud cries that occasionally rang from every part of the Enoch Beckford Auditorium on Carmichael Road.

From the pulpit, speakers pleaded for the deaths to serve as a turning point that discourages future treacherous voyages and leads the Haitian government to embrace policies that uplift its people.

“The death of these individuals desperately seeking a better way of life and trying to help their families brings into focus that we need to look regionally and internationally at ourselves in the Haitian community,” said noted preacher Bishop Simeon Hall. “This tragedy brings into focus the urgent need for the political and economic leaders of the island republic of Haiti to take a deep look at themselves.”

“We are all one,” said Rev Dr William Thompson. “We all came from the same place. We were deposited on different islands but we’re all one. We come to ask the Haitian government to put in place measures that would stop these kind of voyages.

“There’s no question you know of the persons that are doing this ungodly action. They must be weed out and made an example of. These are human beings and our hearts feel for them.”

Some of the heaviest applause was for Bahamas Christian Council president Delton Fernander who highlighted Haiti’s fight against slavery and colonialism during the Haitian revolution and the role that played in the country’s later struggles.

“We cannot and should not judge anyone harshly who would take a drastic measure to try make it better for their families and for those they leave behind,” he said.

In a rare moment of humour, Francois J Michel, Haiti’s charge d’affaires, boasted of his country’s blessings, saying: “The culture of Haiti is rich and valuable, good food, good beaches and there is something else: beautiful women.”

The funeral was a culmination of a week of search and rescue efforts after a sloop reportedly carrying 83 people shipwrecked in the Abaco cays while navigating a dangerous reef on February 1.

Authorities have recovered 31 bodies thus far, nine of which were too badly decomposed to make yesterday’s closed-casket ceremony.

Haitian government representatives said all funeral expenses were covered by their government. The funeral was organised by the League of Haitian Pastors, a local group.

A 19-year-old woman, Gina Francis, was one of many mourners who told The Tribune she did not know the victims.

Explaining why she attended the funeral, she said: “I have the same nationality as them and I would need people to support me as well if I’m in the same situation so I feel I need to support them too.”

She said some Haitians are warned about the treacherous journey by sea to the Bahamas but they come because they believe Haitians living here are “lying to them.”

“If someone living over here with family over there, they does say ‘you living a better life, you just don’t want us come over there,’” she said. “I does fear for my family but I wouldn’t advise them to do something like this. I worry they would try.”

Another woman, Sadilia Simeone, said she has been in the Bahamas since the 1970s and does not know if she still has family in Haiti.

Still, asked why she attended yesterday’s funeral, she said: “Because I am Haitian and these are Haitians who died. I hate it, because that’s my country.”

The bodies were buried at the Southern Cemetery on Cowpen and Spikenard Roads.

As sad as this is, I bet another boat load was landing during this service. We need a way to deal with those who pay the passage of these immigrants

Went to to Abaco several months ago and the only thing missing was a Haitian flag at the airport. Sad state of affairs!

And here's who we have to thank for the Haitianization by invasion of The Bahamas:

SLOP, Ingraham, Christie and now Minnis; not to mention a whole bunch of dumbed down Bahamian voters who believe, depending on their fancy come general election time, that either the PLP or FNM party has their interest at heart. LMAO

Yes or no - all depended what constituencies a solid negative 12,132 bock shift way from 'Honourable' Imperial red shirts 2017 support will spell certain doom at the 2022 polls for comrades Minnis's, KP's and Carl Wilshire's grip on governing power. Yes, no - comrades Minnis and KP will be prime targets gone down 2022 defeat early election day voter returns?

Basically the Chinese come here for the same reason Haitians are trying to come. But China has more money and so they can better organize their workers to invade a country and take jobs that wold ordinarily go to natives of that country. And then the Dominicans come and raid the fishing grounds.

at least they have a higher level of education, stay to themselves and pay for most of the services they get in this country. They are not the socioeconomic parasites our 'brothers' from the south are!

It is the wounded that are strong. You see it by the way they treat others As you speak about the Chinese, there are over 800,000 of them in prison camps in China. They are being 'reeducated" they are being taught English, Western Culture and even being "taught" some traditional Christian hymns, like, "Jesus loves me, t'is I know." The question is "For What?"

How did this ricketty boat get all the way to Man O War cay, Abaco???????? ....... The people (Bahamian and Haitian) who can answer this question have these victims' blood on their hands.

This is a good turnout, but i remember about ten years ago there was a Bahamian fishing boat that capsized and the turnout was over twice as large.

And when a suitable period of mourning has passed, alll of the family members that identified the bodies need to be fully investigated and held accountable. It is no coincidence that they were all identified.

Their insiders on the RBDF probably knew exactly when the mission Illegal boat ride turned became a rescue operation.

In answer to why a Haitian sloop can come all the way through the Bahamas without being detected. Its quite simple. The boat is made entirely of wood with no engine. In modern terminology its a stealth ship making a very small radar signature. Haitians smart eh? Rumor has the next generation of F35 interceptors will be constructed from "dilly " trees.

@ Cas0072 Exactly! Every one of the relatives, friends, and acquaintances that assisted these parasitic invaders should be investigated and deported!

I believe that Minnis and his team and all the repeat politicians are well aware of all points on how illegal immigration is allowed to thrive. Even with this obvious collusion, I have no doubt that Minnis will again play blind to it when he rushes over to his favorite Haitian church to give his personal condolences and to blame Bahamians somehow.

Who paid for the burials? Not ME I hope! Damn illegal Haitians mean to cause us money no matter hoe we "dispatch" them!!!!!!

my question as well, why are they not cremated ?

Due respect but why not the bodies returned to Haiti for burial?

Respect my ass! I have absolutely no respect for these Haitian parasitic invaders that came here to destroy MY COUNTRY and people.

Since the lousy PLP and FNM cannot deal with these dam disgusting invaders, hopefully, all the rest planning on coming here will meet more of our reefs and sharks!!