Mingoes Shot Down By Rockets 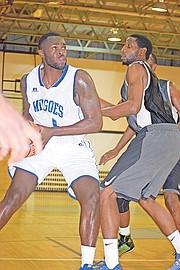 UB Mingoes player Antwan Barnes in action against the Rockets.

THE University of The Bahamas Mingoes men’s basketball team lost to the Discount Distributors Rockets for the second time this season 88-81 Wednesday night at the CI Gibson Gymnasium.

It was one of two games played in the New Providence Basketball Association’s regular season. In the opener, the Sun Oil Rockers defeated the Caro Contractors Titans 71-67.

Here’s a summary of the games played:

Lerecus Armbrister came off the bench scoring 18 points with four assists, four steals and two rebounds to pace the Discount Distributors to victory.

Midway through the second quarter, Mingoes forward Travaughn Nicholls scored and then went down with an apparent knee injury. In the previous game starting point guard Ramon Dames was also injured. Both players are possibly out for the reminder of the season.

Cameron Chery led three players in double figures as Sun Oil pulled off their win over the Caro Contractors.

The NPBA will be back in action tonight with three games on tap. Here’s the schedule: