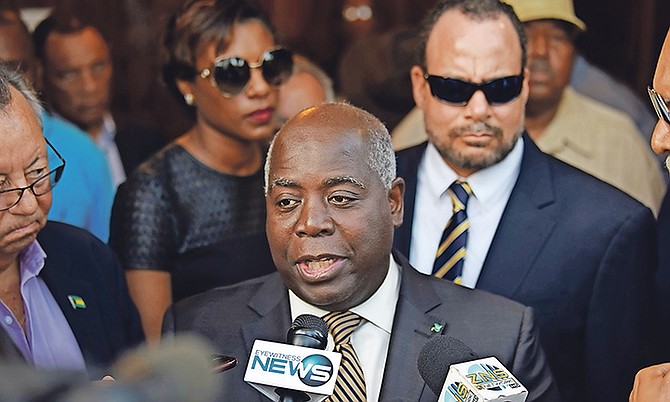 PLP leader Philip Davis speaking outside court after the Frank Smith trial was brought to an end.

Mr Davis said the Progressive Liberal Party is “mulling over” plans to extend its boycott of both the lower and upper chambers.

“You don’t have any independence, there is no outrage from civil society,” he said in an interview with The Tribune.

“If this was the PLP they would be all over it. Where there is a clear finding that the streams of justice are being contaminated and infested with political interference. You had a witness who talked about being pressured, talked about giving evidence against her will. There was clear evidence she was awarded a contract for $2m less than two weeks before going in the witness box.

“There are no independent voices that can speak to that? The Bar Association has said nothing.

“This woman was so vulnerable. How could the AG’s office have asked about (the PHA contract), and they skip the story?”

The Tribune has reached out to several prominent lawyers for comment on Chief Magistrate Joyann Ferguson-Pratt's ruling, which cited “egregious” conduct in connection with Mr Smith’s trial.

Yesterday, Mr Davis said the members of the opposition were awaiting the government’s response to their complaints, insisting they wanted their concerns about their perceived assaults on democracy taken seriously.

The party last week staged walkouts at both the House of Assembly and Senate in protest of “tyrannical attitudes” in government, whom it claimed were determined to use prosecutorial powers of the Crown to target PLPs.

The move has drawn criticisms from several government officials including Attorney General Carl Bethel who has attacked the PLP’s position on at least two occasions in recent days.

Mr Davis yesterday took issue with the government’s continued action against the PLP, calling for greater outrage from societal groups and general public over the government’s handling of cases involving PLP members.

“It’s in peril and there seems to be no outrage over what is happening,” Mr Davis told The Tribune.

Referring specifically to major revelations that came out of the Frank Smith case, he questioned why a government so pressed on attacking corruption has done so little to investigate the corrupt actions highlighted through the case.

“We would expect they would at least launch an investigation into why the phone records were doctored,” he said. “I mean it’s indefensible.”

“A witness was given a $2m contract days before she goes in the witness box. There should at least be some response and there is nothing.”

He added: “… The Shane Gibson case is worse, they put a gag order on it but it’s worse. It makes Frank’s case seem insignificant, it’s really troubling.”

Mr Davis further claimed that the actions of the FNM have shattered the confidence the Bahamian people had in the administration of justice in the country.

He said throughout the country currently, persons are questioning the validity of the cases against many, if not all, of the inmates at the Department of Correctional Services.

“… People are talking about it because that innocent man from over the hill may be in prison now, and his parents have been claiming that this has been happening to them and were unable to uncover the smoking gun,” Mr Davis said.

“How can you have confidence?”

When asked if his comments should be viewed as an indictment against law enforcement agencies, Mr Davis said his commentary had more to do with the persons in positions of authority who were allowing themselves to be manipulated.

“I don’t know if the force is strong enough to stand up to the political electorate and it does not appear to be that way,” Mr Davis asserted.

“People are honestly getting angry.

“People are anxious to see what the government is going to do.

Mr Davis implored the Minnis administration to do all necessary to restore confidence in the judiciary.

Oh how the wicked flourish temporarily of course,

Doofus Minnis doesn't have the balls or power to dare sack Sands and Dames, and they both know it. Slowly but surely the Bahamian people are beginning to realize that Minnis is PM in name only and that real power over our country and its people is in the hands of others like the Symonette family, Sir Snake, and King Sebas. LMAO

Is it just me or does everyone else get nauseous when they see a photo of that fat, little fool at the top of the page?

Yes, or no is Colony Of Out Islands in need MP's weekly Prayer Breakfast when House is in session, for comrade men's and women's from differing political parties gather together to pray in the spirit of Jesus, yes, no?

"Momo" only an old diehard PLP could be as visually impaired as you are.

Yes, you got hit. Old diehard PLP here. If you knew who you were talking to you would feel justifiably stupid to suggest that. Your attitude sums up all that is wrong with our country: POLITICS. Primitive Bahamians like you are obsessed with colours, letters and acronyms and base your whole perception of the universe on political identity, which you fetishize like a cult. So you ignore the obvious where it does not suit your narrative. That this is the least transparent, most brazenly corrupt government in our memorable history just passes right by you because it does not fit your narrative. It does not matter that Minnis and crew lied and tried to defraud us into the OBAN land grab and were caught red handed (even trying to slip BEST away from the Environment portfolio unnoticed - and denying it); it does not matter that they corrupted the police force and wasted millions to undermine due process in the Frank Smith case; it does not matter that they increased VAT on the dumbest of pretexts while sparing Lyford Cay billionaires Real Property Taxes. All that matters is that Davis' (very Black) face reminds you of something primal that goes beyond reason or rational thought. That is dangerous and idiotic. And it makes you ideal prey for the political manipulators that own the Bahamian media.

Hi Fred Mitchell. . .only you can come up with this dumb nonsense. . .its not a black face. . .ITS THE FACE OF THE PLP THAT SEND SHIVERS DOWN THE BACKS OF THE PEOPLE!! HIS FACE SAYS THE PROTECTOR OF CORRUPTION. . .THE WAY WE SEE IT!!

Momo even if you are blind I agree with everything you say. So true.

Momo we are forming an underground organisation to bring down this despotic, Corrupt regime. You would be a welcome addition to our growing ranks. It seems you have already graduated from the Joseph Goebbels school of journalism so thats a very positive Start.

Remember that Goebbels was the stupid clown that brought down the Third Reich with his 38 laws of power thinking style. . . keep in mind that the people see yall. . .form ya seditious steps. . .sedition is a capital crime. But we don't have to worry much though. . . yinna tried that in the past. . .all yall got was eventually the hanging of Wendell Burrow and Poke Humes.

Geobbles, Mangler, Hitler etc.. . .all end up dead and burned to a crisp in the gutter. . .in fact the whole Third Reich leadership ended up dead, committing suicide, hung in jail or hunted down and shoot like dogs in the streets by the Mossard. . .eventually hound out of every country who found them. . .nomads in every nation. . .complete destitute. . .all because of Geobbels stupidity!!

I'm not even sure the government cares, look at the math, 4 vs.34

Bahamian civil society is silent, loaded with cowardice and self preservation quite frankly. However the above miscreant aught to be thankful, as a strong civil society would not allow his ilk in politics. Nor any existing PLP for that matter. The FNM is no better. The real dichotomy is their speech and high moral ground while opposing, (either bunch) which turns to thievery and skullduggery once elected. Seems a given. #shops aught to offer odds.

Licks2 I don't disagree with what you are trying to say. Can I suggest a more in depth study Of the history of the Third Reich would be beneficial to your argument.

Hahahahahahahaha. . .just as I thought. . .you don't know what ya talking about. . .you sounded that your knowledge of the Reich started with Adolph Hitler and his rise to Chancellor and leader of the Wehrmacht or OAW in mid 1938! Nazi-ism started as the result of establishment of Habsbury in Switzerland. . .Austria was ruled by the House of Babenberg until 1246 and by the House of Habsburg from 1282 to 1918. Death of Franz Ferdinand by the hands of a Serbian boy of 17, which resulted in WW1, that started a push back in the relationship of Habsbury and Austrians, Deutcsche Arbeiterpartei in 1914, Mein Kampt in 1923 on to deposing Paul Von Hindenbury 1933 until becoming head of the Wehrmacht in 1939. . .but it all started all the way from Leopold I : the Illustrious 976-994.

Most historians believe that the shot fired by Principi in 1917 was the actual beginning of Nazism. . . a world not ruled by Habsburg. . .which was always the Austrian "beef" with Habsbury Empire!!

HAHA brave no one believes you or Frank for a second...You guys aren't really needed at all why not dissolve your whole party?

You get upset and walk out but this is exactly the same crap you pull when you are in power??

Criminey can we please get some normal human beings that aren't already bought and paid for elected ???

And as follow up, this current government, i hope will also come under microscope in 3 years time if there are grounds for investigation. Point is times have changed and if you are in the political spotlight be ready to face the music dingbat. MY ISSUE IS WHY THE ELECTED OFFICIALS ARE TARGETED? WHY AREN'T THE LIFERS INVESTIGATED? I'm referring to the permanent secretaries and all the life long employees of the government. you can't accomplish much underhanded stuff in a 5 year term but give someone 20 years and they can accomplish much.

And the PLP are completely irrelevant in this day of the Bahamas.