RIGHTS Bahamas (RB) yesterday condemned a viral video of a suspected migrant being placed in the trunk of SUV by a group of immigration officers as “extremely disturbing”.

RB president Stephanie St Fleur likened the ordeal to a kidnapping, questioning how such an act was permitted to have taken place in The Bahamas. In the short clip, a man is seen being guided to a grey SUV by two male immigration officers, as a third opens the trunk. The man is placed head first into the trunk before all three officers get into the backseat of that same vehicle.

Addressing the clip in a statement yesterday, Ms St Fleur said: “If this is an accurate depiction of the cruel and heartless tactics to which (Department of) Immigration have stooped, Rights Bahamas cries shame upon the government.” 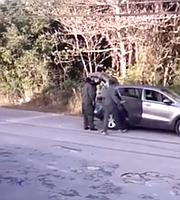 She added: “That our law enforcement officers would treat a human being in such an inhumane and degrading manner is a stain upon our national soul. It goes far beyond the bounds of lawful procedure and common decency.”

“This man is innocent until proven guilty and the behaviour of these officers cannot be justified.

“This cannot be called a lawful detention – it is a kidnapping, pure and simple.”

Ms St Fleur said she has been informed the incident in question took place in Palmetto Point, Eleuthera and called for a thorough investigation and subsequent report to be presented to the public in short order.

”Every human being has a right to be treated with dignity and respect and failing to punish such disgraceful actions is the same as condoning them,” said Ms St Fleur.

Frank Davis, the government’s Permanent Representative to the United Nations in Geneva, recently said: “The Bahamas commits to implementing international norms to give effect to human rights in an effective and sustainable manner, which includes gender equality, domestic violence, children, detention conditions, a national human rights institute, freedom of information, access to justice, access to education, persons with disabilities, trafficking in persons and migrants.” We as a country simply cannot continue to say one thing, and do the opposite. We will inevitably be revealed as hypocrites, bringing international shame upon our heads.

Ms St Fleur added: “Rights Bahamas recommends that in the shortest time possible, the Department of Immigration put in place a comprehensive programme of sensitivity training for its officers. We would also like to reach out to anyone who may know the victim or his family. Rights Bahamas stands ready to represent them and defend their Constitutional rights.”

When contacted yesterday for comment, Immigration Director Clarence Russell said he was out of the country and was unaware of the incident. He referred all commentary on the matter to Immigration Minister Brent Symonette.

For his part, Mr Symonette when contacted said he was awaiting a report on the authenticity of the video.

He said once authenticity is confirmed, all warranted disciplinary action will be carried out.

I did not hear her protests about Haitians paying for their fellow Haitians to be packed like sardines on a sloop with no bathroom facilities or protection from the elements in order to subvert the laws of a sovereign country or to become shark food!

Because its not about stopping them from coming but encouraging them to assert their rights once they have illegally entered.

This group lacks credibility. I would be surprised if this is another made up story, like the high speed chase that supposedly injured a child.

This group should be named Rights Haitian. Their goal is to see the Bahamas reduced to the squalor of lawlessness that is taking place in Haiti. ...The devil is a liar.

realitycheck242 Time ain't long now the writing is on the wall. It is only a matter of

a short time. and Bahamas Right or Haitians Rights. Know this. Thousands will come. because doc says they will not be sent back.

All this hullabaloo, meanwhile Bahamians held at Fix Hill ...

If illegal immigrants have the same rights as citizens, what is the benefit of being a citizen?