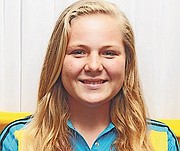 ALBURY Higgs has delivered a series of impressive performances for the South Carolina Gamecocks at the Southeastern Conference Swimming and Diving Championships.

Higgs was a member of a record-setting relay team and also delivered a personal best in the meet hosted at the University of Georgia’s Gabrielsen Natatorium in Athens, Georgia.

On day one, Higgs and the Gamecocks got off to a quick start and set three new programme records on Tuesday. She was joined by teammates Emily Cornell, Hallie Kinsey and Christina Lappin to set a new record in the 200 Individual Medley in 1:37.88 seconds.

Individually, Higgs also set a new personal best time in the 200IM when she broke the two-minute mark (1:58.30) for the first time in her career to qualify for the C-final.

The five-day meet continues until February 23.

This is Higgs’ third appearance at the SEC Championships for the Gamecocks.

Her season was highlighted by an NCAA All-America recognition for the first time in her career with her 15th-place finish in the 200 breaststroke (2:09.45) at the NCAA Championships.