Insight: Only As Good As Your Word - That’S How You’Ll Be Judged 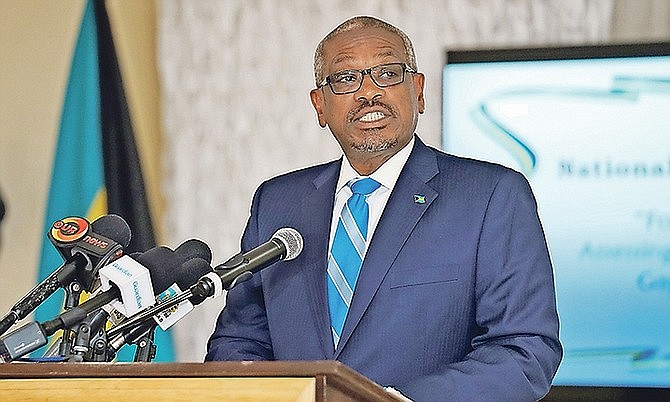 What has been greatly troubling is the prime minister's level of comfort with making promises and not delivering.

IT is widely accepted in our brand of politics that a politician will say anything to get elected. It can almost be likened to the way we treat our children – when they do something naughty, we typically shrug it off as mere child’s play. Likewise, when our politicians rile up crowds of thousands from the campaign stages, promising the earth, moon and stars, we simply accept it when they do not deliver.

Should we not consider how this mindset enables politician after politician to not hold themselves accountable to the utterances that come out of their mouths?

Former Minister of State for Finance under the Ingraham administration, Zhivargo Laing, once said on his radio talk show that hardly any government follows what they outline in a manifesto. Imagine that - a manifesto, a document that should give an electorate an idea of what is to be expected when we vote for our future leaders, is nothing more than an elaborate campaign tool not worth the piece of paper it’s printed on.

We must get to a point where our politicians get the message that accountability will be taken seriously because any man or woman is only as good as their word.

And while we can submit the picture inside government is much different from outside, when promises are made, there should be a plan of action to deliver when the opportunity is presented.

This much has been an issue thus far with the Minnis administration – what seems to be a total lack of vision and planning on the part of the prime minister. While there have been huge gains in tourism and a reduction in crime, crime is still not necessarily under control and the success we’ve seen in tourism can also largely be credited to the former government.

What has been greatly troubling for the Bahamian people is the prime minister’s level of comfort – all while claiming to be the leader of the people’s government – with making promises and not delivering.

Not long after the Free National Movement were voted in as the Government of The Bahamas in May 2017, the Bahamian people were told the prime minister would address the media quarterly. The last two quarters of 2017 went without any such address from Prime Minister Minnis. In fact, thus far in his term as prime minister, he’s never had a dedicated event to speak with the media. Press Secretary Ace Newbold, a veteran journalist, ignored the overt deception in what was promised and defended him by pointing out his availability to the media in more regular, informal meetings.

Newbold should very well know, however, an informal meeting with the prime minister that he can cut short the moment a question hits too hard has nowhere near the same impact as an event with a start and finish time, totally dedicated to the prime minister answering questions from the press.

Seriously, why would the prime minister, after offering this to the Bahamian people, backpedal and avoid such an event? As he does not have a portfolio of his own, it’s not like he should be under the constant pressure facing his colleagues who have the responsibilities of day-to-day management of their respective ministries.

Sadly, it seems as though unless the prime minister can stand in an echo chamber, he is uncomfortable.

An article in another local publication highlighted this as a possible political strategy of the prime minister which, while it makes sense theoretically, is still a letdown when we think of what he promised to be – the people’s prime minister.

In this regard, he has been an absolute disappointment.

We have yet to see a probe into the confusion that took place between Works Minister Desmond Bannister and the former board at Bahamas Power and Light. Although he said he would deliver, there has been no legislation for fixed election dates and term limits for prime ministers. There has been no passing of a Freedom of Information Act. And remember when the prime minister was called out for his hypocrisy on government travel during the last administration? He promised to outline all the expenses and give a report to the Bahamian people.

Certainly, there have been more promises made by the government, but in these cases and many more, none of them have been kept.

The prime minister is dangerously assuming the support of the Family Islands will secure him another election victory in 2022. What he seems to be underestimating is the growing disdain for his government in the nation’s capital. And while only one island, negative opinions have a ripple effect – particularly those coming out of New Providence.

Once the entire country is in campaign mode, every promise the government made and didn’t keep will be unearthed. Likewise, the decision for the prime minister to ignore the nation’s capital, where mass news is produced and disseminated to the out-islands, will also sway public opinion.

There will be no measure of goodwill in the final days of this term that will save a man whose word is not his bond.

Former Prime Minister Christie surely should be able to lend some wisdom to his modern day “David” – the one who defied the odds and took down a political giant. Or did he? Certainly, with regards to Christie’s downfall, the former PM made the mistake of underestimating the wave that swept the Progressive Liberal Party out of office and ended his political career nearly two years ago. But perhaps Dr Minnis is repeating the mistakes made by his predecessors?

Lack of accountability and transparency were two of the major issues the Bahamian people had with the previous government. As they were campaign buzzwords for Prime Minister Minnis and his colleagues, he ought to remember how unforgiving the Bahamian electorate can be when they feel lied to or misled.

it is impossible for any one to believe anything roc wit doc says. he can not be trusted to speak the truth. His words mean nothing zero. Does he really expect to come back to the Bahamian people with a another set of lies?/

What can not be forgotten is . his lies about VAT. the spy bill. BAR MAR. The Chinese. And now OBAN that will have serious problems for generations to come.

Attention should also be noted to the purchase of OUR Lucaya property.

I don't read this column any more. . .this is the second time I refused to read anything!! Anybody who knows me will attest to the fact that I would read anything. . .hell I was a sole Neal Rogers listener her in the Bahamas during the heat of the Neal Rogers' Show and the row with the Bahamas when Rogers got beaten up by people on Thompson Blv., placed into a taxi, driven to the airport, placed on a plane and send back to Florida!! That's how much of a rebel I can be when it comes to keeping an open channel to get good information. . .BUT THIS PIECE AND NAUGHTY'S. . .I DON'T READ. . .they are little value as dialogue. . .