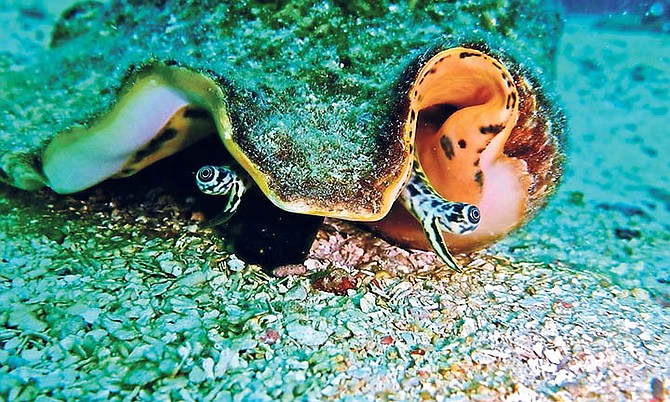 THE Bahamas National Trust is gearing up for a major conservation push in the wake of research findings that warn the local conch supply could be wiped out in ten to 15 years.

In a press release issued earlier this month by Shedd Aquarium, the group revealed its research on more than 3,000 conchs at 42 survey sites throughout the Bahamas between 2009 and 2017, shows not only are the numbers of adult conch decreasing, but the densities of legal-to-harvest queen conch are now far below the established minimum threshold for reproductive success, except in the most remote areas.

Shedd Aquarium carried out the research study with the Community Conch Group, and the findings were published in the scientific journal “Reviews in Fisheries Science and Aquaculture” last October.

Addressing the findings in an interview with The Tribune yesterday, Mr Carey said researchers involved in the project like Dr Allan Stoner of Community Conch, and Dr Andy Kough, research biologist for Shedd Aquarium, embedded themselves in the local conch industry, gathering a true first-hand understanding of conch consumption in the Bahamas.

Mr Carey said over the course of the project, members of the research team compiled critical data obtained from local environmental groups, fishermen, restaurant owners and exporters – all of which went toward obtaining the true range of the national and cultural importance of the species.

“That’s why this research is so key,” he told The Tribune. “This isn’t a foreign group that just sat back and gathered information on conch species. These persons have been among us for a long time learning, studying and going over the numbers with the local community walking with them every step of the way.

“They understand the importance we put on the conch and that is reflected in the study. We’ve been at this for some time now. Bahamians across the length and breadth of the country know that this is a complex issue because conch impacts so many. Conch is everywhere and to keep that up, we have to push efforts that are wide-ranging and all-inclusive.”

According to Mr Carey, current policy makers have already given “a degree of buy-in” to conservation efforts.

He told The Tribune he is working closely with Agriculture Minister Michael Pintard to craft a comprehensive plan that will deliberately lay out key policy items across three categories: urgent, medium-term and long-term objectives.

He added: “This entire fight is a high priority fight, but we know it is something we can’t address or win through just legislation, conservation or the media. This is something we have to do in a true sense of collaboration.”

Mr Carey said to that end, local groups and teams have pitched ideas that address everything from habitat management to harvesting techniques – all issues that are key to sustaining conch sources.

“We’ve looked at things like adjusting how and when we allow exports. There has also been talk around monitor measurements; there needs to be a stronger enforcement of the 15 millimetres lip thickness requirement. We’ve also talked about more protected areas for conch.

“Another thing we’ve looked at is the use of compressors in the process of harvesting conch. Compressors while still legal in the Bahamas, have been proven to be hazardous to conch habitat and therefore, that is something we want to review. When we talk to fishermen about this, we tell them that we are trying to ensure that they always have a lifeblood. It is sometimes hard for them to hear, but we have to get them to understand.

“This is the only way. Across the Gulf Stream in Florida, their population hasn’t returned since being overfished. There are talks about conch farms, but that is just another failed plan. The only way out of this is true conservation, smart conservation, well-intending conservation.”

The BNT back in 2014 launched its “Conchservation” campaign to ensure the long-term survival of local conch populations.

Through several partnerships, the BNT raised tens of thousands of dollars for the cause, which is still continuing.

Let's hope there is some real action not just talk, new enforced restrictions, better data gathering on commercial activities etc in 2019. Cuz it sounds like we just keep going around in circles on this, link to 2012 article saying some of the same things:

Go down to Fish Fri and lock up or fine severely any vendor with undersized conchs. Go to the docks and lock up or fine severely any boat captain with juvenile conchs. Start small. If we can't enforce the blatant infractions, how can we expect to police an entire industry shutdown. The public should not be receiving a bowl of two juvenile conchs when they order scorch conch at Fish Fri, as many are receiving now.

Should have put a season on conch .......... or shell-size limit on conch twenty years ago.

But our people and the Government cannot understand or do not want to deal with it when these problems are shouted "from the mountain top" at them ......... SMT

Just like how the feral wild hogs are eating all of the black crabs in Long Island ........ these are not pets, they are a dire threat to the cultural way of life for many islands.

The Galapagos has done well with invasive animal removal, on an island, its actually not too hard it just needs the funding, the procedures are well down now.

Problem is everyone thinks there is plenty left. What they don't remember is when they were a kid you could get plenty a few miles away from Nassau (if you are my age, the older people will remember getting them off Nassau). Now you have to travel far to get any. Unfortunately nothing will change until its too late and we become like Key West which is still hoping to get its conch population back after 30 years

Quite simple...stop harvesting conch for export. That should be step #1!!

At this point an export ban would just be tinkering with the problem. A full moratorium on all harvests would be necessary, read in the article just how bad it is. Fines or this or that export rule will just not solve the problem. You need enough conch for mating and reproduction or you have no conch. You can't just have 10% "less" conch.

Forget about conch.....Bahamians are going to wiped out in another 10-15 years by the Haitian invasion! LMAO

@Well_mudda..... you may just be right. I had to laugh at the way you said it, but you know, it really isn't funny!

Yes, or no make it violation of the Constitution for Imperial reds issue export permits we 'beloved' Conchs. Yes, no - other than we Queen and her representative Her Excellency Marguerite - it is rare we citizens unify as one people when referring anything as we “beloved" in way done about Conchs, by BNT's comrade Eric.

Is there a 'mating season' for conch that could be closed and have a meaningful effect? Without knowing the above, I think the best solution is to assign two officers for Potters Cay and two for Arawak Cay, whose job it is to check conch maturity. A fine of $50 per conch could be written up and after three citations your stall/business license is revoked for a month. After three more citations a $10k fine plus your business is shut for a year. Two more citations after that then you are restricted from any future involvement with any part of the fisheries industry, fined $50k AND 3 months in jail.

All this grandstanding, big words and years of studies and not one word about how they intend to curb Dominican poachers who export 1.4 metric tons of conch and they don't have 1 dam conch anywhere in their waters!

Yes, conch will become extinct in the Bahamas just as it has in Dominican waters, but Bahamians have nothing to do with it!!

You are the intellect here,wish I could add to your comment ten more thumbs up!

I asked a marine expert once how bad he was.

He told me we have only 10% of the original pre discovery by Europeans amount of conch and we take out 10X more than is sustainable. And this was probably eight years ago, so the situation is no doubt much worse.

So realistically we'd need a no conch catching holiday for probably 10 years to allow the population to recover, along with permanent no conch taking zones to allow a serious chance of conch survival.

On another note the Bahamas needs an Endangered Species Act. I hope if we do one we'll learn from all the mistakes other countries did with theirs, which namely is to allow politicians over scientists to control the process.

Yes, or no ma comrade Concerned 779. and isn't this same, or even worse situation with the way the natives are about see we government sign over we beloved Bay Street to be split up between cruise ship owners and the Chinese? Yes, no - no wonder yesterday only but a few celebrated majority rule day.... not much left behind Imperial reds sign over.

Aaaahhhhhh, so you have been enlightened by a marine expert! So exactly what is your plan to stop Dominicans poaching conch during this proposed 10-year conch hiatus imposed on Bahamians?

There is a 1000% better odds of Hubert Alexander Ingraham and Perry Gladstone Christie admitting they are dumb as starfish than us implementing substantial sustainable measures to stop the Dominican poaching operation!

Face it, unfortunately, conch is doomed, its just a matter of time, and Bahamians have absolutely nothing to do with it!

Well, that would be up to the RBDF. Its not hard with modern radars to detect boats, and then seize and sell them to in part pay for operations.

Not sure how you can exempt Bahamians from responsobility if Conch go, given these are our waters. The choice is ours to make for there are still conch now, and its up to us to let them go or do something about it which would mean the moves I mentioned.

@Well_mudda,you have plenty company with that insight. I tell all who would listen ,that in twenty years,when Bahamians travel to the U.S., Canada ,etc, with surnames like,Ferguson, Thompson,Johnson,Rolle,Russell etc, residents of those countries would be surprised at our nationality ,because they would say that Bahamian names do not sound like that.

On the issue of the future of conch in the Bahamas, when i was a youngster many, many,moons ago, my late father was a blacksmith,who made and sold conch hooks to The Iron Mongery,a store that was located downtown Bay Street.Fishermen came to buy these hooks, to which a pole approximately twenty feet in length was attached.With those poles they would 'hook' a boatload of conch,never having to go into the water,as some of them could hardly swim. They got all the conch that their 40' sailboat could carry at a maximum water depth of twenty feet.

Yes, Pablojay for sure thanks inventiveness your skilled comrade blacksmith father I was a much satisfied conch hooking customer user conch hooks purchased from the Bahamas Ironmongery Company's store located on Bay Street.

Thanks Tal,if he were here he would surely appreciate the comments.I do so on his behalf.

Yes,or no ma comrade, the passed on are always in and around us - just not in physical sense where we touch them but they have ways touch us and we surroundings.Yes,no?.