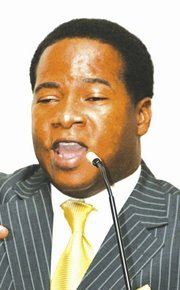 A Bahamian financial services provider yesterday said “every member of the sector should be quite concerned” about what the prime minister’s European trip means for the industry.

Pointing out that the sudden cancellation of the prime minister’s appearance at the World Trade Organisation (WTO) meeting in his constituency suggested the visit was hurriedly organised, Mr Moss said the Bahamian financial services sector should be “gravely concerned” that it was still seemingly in the EU’s “crosshairs” despite all the legislative reforms enacted.

He added that the Prime Minister’s involvement also indicated that The Bahamas was anxious to avoid a repeat of its “blacklisting” last year, which occurred after the EU felt it did not receive a high-enough commitment to address its concerns - and the specific language it was seeking - in a letter signed by Marlon Johnson, the Ministry of Finance’s financial secretary.

“I think that is exactly what it is: They made a mistake when they had Marlon Johnson sign the commitment letter and got ‘blacklisted’,” Mr Moss said. “They’re trying to ratchet it up to the top with the Prime Minister meeting these functionaries in Europe.

“They’ve perhaps let them know they’ve put us on the ‘blacklist’, and the Government is now trying to pull out all the stops to let the functionaries in Europe know they’ve done everything required of them and are bringing out the big guns, the Prime Minister, out to keep us off the list.”

Mr Moss added: “It looks bad optically because the Prime Minister had announced he was having a Town Meeting on WTO. That says to me this was not planned properly. It’s almost like he’s been summoned to the office to talk about things.

“There should be grave concern. They have done all that is required of them and more, but still we’re in the crosshairs of the EU and OECD. The Bahamas has got to stand on its own to fight its battles, believe in what it is doing, and then it will get a win.

“Right now every member of the sector should be quite concerned as we’re not off the list yet, and that’s what’s coming.”

Many in the financial services industry have been trying to interpret what Dr Minnis’ trip to Brussels means and if it represents a last-ditch effort to persuade the EU not to include The Bahamas on its “blacklist” of nations deemed non-cooperative in the fight against global tax evasion and avoidance.

Other questions have centred on why the Prime Minister led the delegation rather than K P Turnquest, the deputy prime minister, who has led the effort to avoid the EU “blacklist” to-date, and Brent Symonette, minister of financial services.

Both men stayed at home, and Mr Turnquest directed this newspaper to the Prime Minister’s office when it sought an explanation. A government source, though, said the prime minister’s presence was intended to show the EU that The Bahamas “takes this very seriously at the highest level”, and is putting major weight behind its compliance.

They added that while Mr Turnquest and Mr Symonette had led the “technical negotiations” with the EU, the Prime Minister’s trip was more of a high-level diplomatic mission.

Dr Minnis, together with Carl Bethel QC, the attorney general, met in Brussels with Stephen Quest, director-general of the directorate generale for taxation and Customs union.

LMAO....dimwitted Minnis being summonsed by his masters in Brussels. Priceless!

All the white men and women at the EU want to hear from Minnis is 'yes sir! jump how high?'