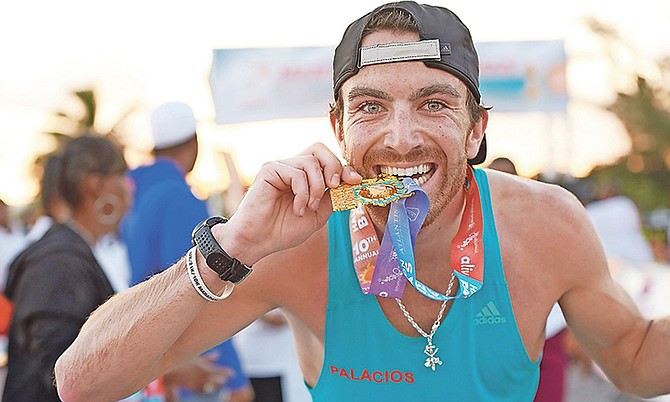 Bryan Morseman, of the United States, celebrates after winning the full marathon during the 10th edition of Sunshine Insurance’s Marathon Bahamas Race Weekend. He finished in a time of two hours, 27 minutes and 35 seconds. Photo: Shawn Hanna/Tribune Staff

The overall winner of the full marathon, first to cross the finish line at Arawak Cay, was Bryan Morseman of the United States in two hours, 27 minutes and 35 seconds.

The 33-year-old New York native said it was a welcome change to run in this environment coming from the frigid temperatures back home.

“We actually have about 20 inches of snow on the ground at home right now so this is nice to get away, try to make a little bit of money. I’ve been prepping for this kind of race, using my treadmill a lot to get accustomed to heat because I knew it would be warm. In New York it’s almost impossible to train outside in for the heat in a race like today, no matter how many layers you put on,” Morseman said. “I thought I could run 2:25, but I was out there all by myself but the goal was to come out here and win and get the course record and I did both of those. So I can’t complain.”

The veteran distance runner said he eventually decided to participate in Marathon Bahamas based on the recommendation of former two-time winner and MarathonGuid.com teammate, Justin Gillette. “I’ve been wanting to come here for a couple years. My teammate Justin Gillette, who actually won the race a few times, I contacted him about the environment, about the route, how the course is and he had nothing bad to say about it, so I figured with the prize money offered this year I figured why not compete for that and to shoot for the course record. I was just about five minutes under the course record.” 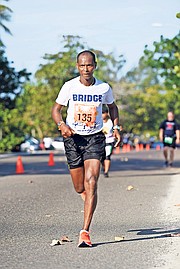 Delroy Boothe, of the Bahamas, competes in the full marathon.

Prior to the event, Morseman noted that he continues to draw inspiration from his son Leeim who has spina bifida - a congenital spine defect that poses a variety of health problems and can leave a child unable to walk if left untreated. He has physical therapy three times a week but still might not be able to walk.

“Every time I’m in a race, I think of him and how my pain is nothing compared to what he has gone through. He gives me the energy shot to pick me up and carry me through to the finish.”

For the first time in its history, Marathon Bahamas offered a $10,000 jackpot to winners of the marathon and half marathon.

For surpassing the former course record of 2:33:09, Morseman also recicved $500.

The top overall female finisher of the full marathon was 39-year-old Nagy Vatalin of the United States in 3:12:46.

In the half marathon, Nacho Hernando Angulo was the top male finisher and set a new course record to claim his share of the prize purse.

Alice Henley, of the United States, was the top overall spot among females in the half-marathon.

A wide cross-section of local participants took part in the marathon relay. The relay is a four-person team event with pre-set running distances of 6.2, 6.9, 5.6 and 7.5 miles.

In the male category, the Hillview Pathfinders took first place in 3:25:58.

One of the highlights of Marathon Bahamas is traditionally the High School Relays segment.

“Sunshine Insurance race weekend has evolved into something bigger than the marathon itself. It’s about everything the Bahamas said we are, and that is all showcased here. Marathon Bahamas provides the best marathon experience in the world,” said Sir Franklyn Wilson, chairman of Sunshine Holdings.

The marathon starts at Junkanoo Beach (west of downtown Nassau) heading east through downtown Nassau over the western Paradise Island bridge and immediately returning over the eastern Paradise Island bridge. Route continues east to Montagu Beach with a westward turn onto Shirley Street all the way to Cumberland Street north. At Bay Street, the course continues to the west, hugging the northern shores of Cable Beach, Delaporte and West Bay Street with the turnaround ¼-mile west of Compass Point returning to the most eastern entrance to Arawak Cay for an oceanfront finish.

Race Weekend began with the hosting of the Susan Komen 5K run/walk, which started at Montagu Beach and finish east of the old Paradise Island bridge adjacent to the Police Station.