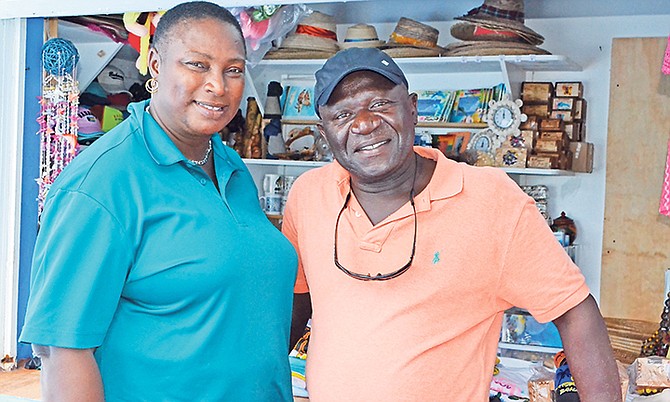 Maryann Rolle and her husband, Elvis.

A NETFLIX documentary chronicling the failed Fyre Festival has created a bonanza for Maryann Rolle, 55, a restauranteur whose story of losing thousands of dollars when the festival collapsed in 2017 resonated with viewers.

A GoFundMe account for her has raised more than $100,000 up to press time last night.

Mrs Rolle told The Tribune yesterday that she was interviewed for the documentary, “FYRE: The Greatest Party That Never Happened,” six months ago but forgot until the director, Chris Smith, called to reveal his GoFundMe intentions last week.

“This Sunday I’m right here at my table with my glasses trying to see all the names sending donations, seeing what names I know, looking into my little screen and watching every donation, whether it be a dollar or more,” she said.

Mrs Rolle was contracted to provide catering support and lodging for the festival. At the peak of the event, she produced 1,000 meals per day.

“I had ten persons working for me just preparing food all day and all night, 24 hours,” she said in the documentary. “I literally had to pay all those people. I went through about $50,000 of my savings that I could’ve had for a rainy day. They just wiped it out and never looked back. I don’t even like to talk about the Fyre Festival anymore. Just take it away and let me start a new beginning because they really, really hurt me.”

Mrs Rolle said yesterday she still owes about $75,000 because of the failed event, though businesses have been accommodating to her.

“Financially the festival was a pain and a strain for me. You know when you have your credibility and you lose that, nobody is going to hear you for being that silly to bring in all that food, and how do you go back to Bahamas Food Services and tell them a deal went sour? What I had to do, pay them off, pay them as I go, and so I lost my credibility. When they would have credited me $10,000, that don’t happen anymore for me.”

These days Mrs Rolle is focused on more than just paying off bills.

She told The Tribune one of the first things she will do in light of her GoFundMe fortune is go on a cruise through the Caribbean with her husband, Elvis Rolle, and three sons. “I’m going to take my family on a wonderful, long deserved vacation,” she said. “We are going on a cruise.” She said for all her hard work, she will also buy herself a “state of the art Jeep.”

“What I realise is if you look at the bills you will never enjoy life so some of those bills will have to back to the side and let Maryann have the fun,” she said.

She also said she planned to tithe ten percent of the GoFundMe donations to her church.

“Just watched the documentary on Netflix,” wrote Tasha Libman. “My heart went out to these people who worked for a paycheque to support their lives and family.”

Another woman, Kaisha Irving, wrote: “No one should have to deal with what you and your family endured. God bless you for doing right by your employees when it was not your responsibility and you were left high and dry. I wish you the best.”

A man, Gerard Barton, wrote: “Maryann, your story touched me when I watched the Fyre Festival documentary on Netflix! I hope this finds you well much love from New Zealand.”

Roxanna Donald wrote: “My heart broke for her. The genuine and let down she felt. She did seem to be hurt and I knew I was going to donate, even before I knew about the page. We all laughed at the kids being tricked, mainly because they were wealthy spoilt millennials but I didn’t even consider all the hardworking local people and how it affected them. I hope to visit her place soon, looks amazing.”

Last October, Fyre Festival founder Billy McFarland was sentenced to six years in prison for multiple counts of fraud, including the botched festival.

Good for you! So many people are robbed due to crooked dealings in this country. At least this story had a happy ending for this lady.

Don't buy no state of the art jeep Mrs Rolle. You can afford the jeep now, yes,but the parts and servicing of that jeep will be very expensive. Better to buy a second hand reliable car. The vacation is ok but set a limit for what you will spend.200,000 won't last long for one person much less 5 people. What happens if there's ahurricane next year? Would be a good idea to spend a few dollars on a financial advisor. And put a dollar limit on their service too.

Maybe she should pay her bills that she days she ran up first, that would be the smart thing to do. I wpuld not run my mouth about vacation and a jeep. The go fund money is being donated so you can pay your bills!

Thought the same thing...if that's her intentions, she should've kept that part to herself.

Couldn't she just keep her mouth shut and say thanks to all those who donated! Oh well!

I hope this teaches us Bahamians a lesson. The minute somebody with money comes here, we bright eyed and bushy tailed........hands out greedily.........kissing ass .........giving away much and not even getting anything back in return.........getting swing like jackasses and STILL ........