Michael Cartwright Commits To The Eagles 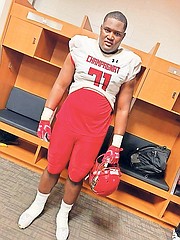 MICHAEL Cartwright officially brought his recruitment process to an end when he announced the NCAA programme he will join this fall.

“First of all I just want to Thank God for everything he has done for me in my life.

“I want to thank all of my family members that have helped me and have been there through it all.

“I want to thank Miss A for making me a part of the Champagnat Catholic School Family for the three years I’ve been a part of this great institution. I also would want to thank my coaches for not giving up on me and helping me be the best football player and student I wanted to be. Last but not least I want to thank the Lions football team for always pushing me in practice/games and for all the great memories we had together over the last three years,” he said.

“It’s been a long and stressful recruiting process and I want to thank all the schools that have recruited me during the process, but today, January 20th 2019, I’m truly blessed to say I’m committed to North Carolina Central University.”

Cartwright will be a member of the first recruiting class for new Eagles head coach Trei Oliver. Oliver was announced as NCCU’s 24th head football coach last December. In 2018, the Eagles finished 5-6 overall, 3-4 in the Mid Eastern Athletic Conference.

He becomes the second Bahamian player to matriculate from the Bahamas to Champagnat, to NCCU.

Jamal Symotte was a member of the Eagles programme from 2012-2016. In his senior season, he was named a member of the All-Academic Team and All-MEAC Second Team after posting the team’s second-highest grade of 89 per cent on blocking assignments with 27 pancake blocks.

Prior to his announcement, Cartwright was recently named to the Miami Herald’s All-Dade Class 5A Independent Football First Team..

The 6’6”, 293-pound offensive lineman recorded 65 pancake blocks on the season, most among any lineman selected to the first team.

The Lions concluded the season with four consecutive wins to earn a trip to the state title game.

Prior to the season, Cartwright re-entered the recruitment cycle when he de-committed from the University of Indiana Hoosiers in December. He originally announced his commitment to join the Hoosiers last July but according to Cartwright, the second chance at recruitment gave him an opportunity to “re-evaluate everything and to make the best decision for me as a person, player and most importantly a student.”

Cartwright, a former student at Aquinas College, has also blossomed into a three-sport star for the Lions.

On the basketball court he averaged 12.6 points and 15 rebounds per game and in athletics, he became the school’s first multiple district champion in the shot put.

Cartwright was also a member of the Bahamas’ 2016 Caribbean Basketball Confederation under-16 team that won gold in the British Virgin Islands.