‘Don’T Sweep Our Boys’ Deaths Under The Carpet’ 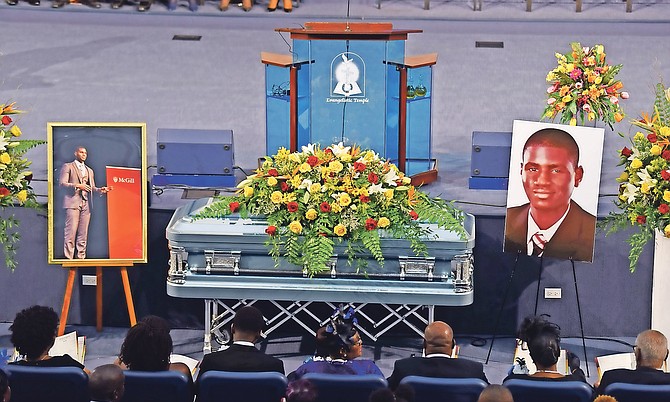 THE family of Blair John, one of the two young men found dead in Italy last month, has raised concerns that authorities initially attempted to sweep the investigation into their deaths “under the carpet”.

The bodies of John and Alrae Ramsey were found in the Po River in Turin, Italy, on June 4 and 5 respectively. Results of the autopsies conducted in Italy earlier this month state drowning as the cause of death. Both young men were buried after separate funeral services held on Saturday in New Providence.

In John’s obituary, the family expressed thanks to his sister and two other individuals “for traveling to Italy to find our sons”, in the wake of the tragedy.

“Their actions are what drew attention to the entire matter,” the obituary continues. “Something the authorities appeared to want to dismiss and casually sweep under the carpet.”

Ramsey, 29, was a foreign service officer who was on study leave in Vienna.

“From the time we heard of his tragic demise, Alrae’s family at the Ministry of Foreign Affairs have been deeply saddened and remain in shock at his sudden passing,” Mr Henfield said. “I say family, because he was not only a colleague but our very own Alrae. Our hearts are full because we cannot imagine he is now gone.

“Alrae was among several foreign service officers to join the Ministry on December 9, 2013. Alrae showed promise to excel at the highest level. He was loved by all within the ministry. He provided so many with comfort through humorous conversations and was an admirable example of what it meant to be a gentleman,” he said.

“Dr Blair John was a son, brother, coworker, a son of the soil, and from all accounts a true gentleman and scholar,” he said. “He was blessed academically and athletically, however despite his many achievements Blair remained humble and personable. Blair knew what his purpose was in life and he remained dedicated to what God had called him to do, even until his untimely demise.

“Blair had ambition, he had determination and he had a hunger for excellence. Dr Blair John represented the Bahamas well. He was a gift to us all.”

Weeks ago I opined that the Italians were being decptive. Some smart ass attacked my position.I firmly believe that the Italian authorities are involved in a cover up. The question is, who are they protecting?

First of all, some facts. Italy is visited by 60 million tourists per year. 10 times as many as visit the Bahamas. Of those, roughly 35% are estimated to be non-Caucasian. It has a system of Law which is 2,500 years old. It is a founding member of the EU, which means that you can take the Italian Government to court in a supra-national jurisdiction, if there was the remotest evidence of "cover up".

So, to answer your question: they are not protecting anyone.

It's just you being paranoid. Through ignorance.

Ah...corruption...you did say "Italy" right? Again not that its the case here, but standing up for Itality because they have "courts"....they also have the Mafioso...and the vatican

English is not your mother tongue, is it? You don't need to have faith in Italian Courts as no court was involved, nor did I mention one. Also, before you start prattling about things you know nothing about, some more facts for you: the first University in the world was in Italy (Bologna). Medicine (and hence pathology) started there. And the Mafia is in Sicily, not in Piedmont (Turin). They are about as different as Massachusetts and Mississippi. You can have about 1000 times more faith in the honesty of an Italian institution than a Bahamian one. And that is probably an understatement.

Two healthy, progressive young men were in that place less than twenty four hours before they met their demise. Quite frankly, no one cares how many more tourists pass through Italy than through this country. It does not matter how old the system of law in Italy is. What we know is that two of our most promising youth died there under suspicious circumstances. We also know the scurrilous information put out by some publications in this much visited, long established European nation. We are also aware that all information has not been made available, including CCTV film. There has been a lot of racial tension and anti immigrant activity in Italy as well, though you fail to mention that. Now, given this fuller picture, it can be deduced that you are being deliberately obtuse in your conclusion above. We are not ignorant. Do not be insulting and presume us to be. Yes, we are smaller and younger, but it does not mean that we have to automatically and willingly accept any garbage flung at us. These are our people, and it would be indecent and just plain wrong to let this go based upon anybody’s rush to try paint a hasty picture and push everyone else to just move on.

According to Google 2 people drown every single minute, every day and every night. Hundreds of people die by drowning in rivers and creeks, being a strong swimmer will not necessarily protect you when you hit cold water and you body goes into shock. Mu condolences to the families and loved ones of these two deceased but for anyone to conclude that there is a conspiracy of cover up is simply without merit.

The families should come clean and say why these two single fellas who Fweddy loved dearly were in Italy, staying in the same little B&B together .......... SMT.

SOMETHING SHADY DEFINITELY WENT DOWN, WHETHER IT WAS A LOVER'S SPAT OR A ROBBERY GONE WRONG. SOMETHING HAPPENED THAT DOESN'T ADD UP TO MERELY ACCIDENTAL DROWNING. FURTHERMORE WHY HASN'T THERE BEEN FURTHER MENTION OF THE 3RD PERSON WHO SUPPOSEDLY WAS RESPONSIBLE FOR RENTING THE ROOM WHERE RAMSEY AND JOHN STAYED. JUST TO MANY UNANSWERED QUESTIONS, UNLESS THE FAMILY KNOWS THE ANSWERS AND KEEPING THE PUBLIC IN THE DARK TO PRESERVE REPUTATIONS.

People please stop yinna "jooking yinna fingers" in them Italians them eyes before they tell yinna what they really think happened!

They "tongue-in-cheek" tell yinna that one had a bump/cut on his head. . .like he fell from the bridge and the other just drowned!! Picture in the Italian paper show a bushy area away from the main road. . .romantic meadow near the river, away from people. . .how romantic!!

They gave a romantic "slant" . . . third person suspected involved. . .no robbery. . .ergo. . .lover's sprat or homophobic retaliation!! I lean toward the latter. . .