Gibson Retains Knight To Be His Lead Attorney 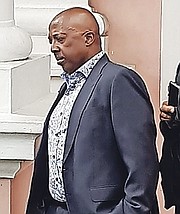 FORMER Labour and National Insurance Minister Shane Gibson has retained Jamaican attorney Keith Knight, QC to be his lead attorney in his upcoming bribery trial, it was revealed yesterday.

Mr Knight successfully defended Gibson’s fellow Progressive Liberal Party politician Frank Smith in his bribery and extortion trial in the Magistrate’s Court, and is now representing Smith in the Crown’s appeal of that decision.

Edward Fitzgerald, QC, who was the lead attorney, will remain part of GIbson’s legal team.

Yesterday’s revelation by another one of Gibson’s attorneys, Damian Gomez, QC, came less than a month after Crown prosecutor Terry Archer indicated that the government has retained the services of James Guthrie, QC, to act as lead prosecutor in the matter.

The matter is adjourned to August 30. Gibson remains on bail until that time.

The number of bribery and extortion related charges were later decreased to 31, though the amount he was alleged to have solicited from Mr Ash remained the same.

The Crown later announced its decision to drop all the extortion charges against the former Golden Gates MP, with Director of Public Prosecutions Garvin Gaskin stating at the time that the decision was for the Crown to devote a “singular and simplified focus” on Gibson’s bribery charges.

About an hour after his initial arraignment, Justice Cheryl Grant-Thompson granted the former Golden Gates MP $40,000 bail with two sureties on the condition he does not reoffend and attends his trial.

Last month, Mr Wells revealed that Prime Minister Dr Hubert Minnis may be called upon to give testimony in his client’s trial. At the time, Mr Wells said Dr Minnis wields information that is “vital” to the defence’s attempts to stave off the allegations.

Mr Wells said the defence has requested the Crown to make Dr Minnis available as a witness. However, he said given the position the Crown has taken on the issue, Dr Minnis may have to be subpoenaed.

In response to Mr Wells’ statements, Justice Carolita Bethel, who inherited the case after her fellow judge, Indra Charles, recused herself in May, said Gibson’s attorneys should endeavour to ensure that Dr Minnis has “something to offer” from an evidential standpoint.

The trial is set for September 23.

Our dumber than dumb Minnis has certainly dug a deep hole for himself. The PLP are laughing at his inability to govern effectively because of his ADD (attention-deficit-disorder) problem that prevents him from staying focused on just about anything. Millions and millions of taxpayer dollars spent on a multitude of investigations of the previous government's shenanigans and what does Minnis have to show for it? Absolutely nada! Absolutely nothing to show but the ongoing power outages during the sweltering heat of summer! LMAO