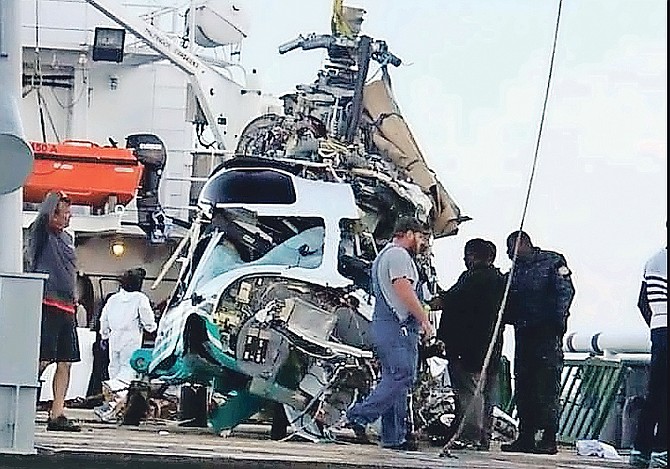 The helicopter after it was brought to the surface. (©The Tribune)

• Aircraft was on emergency dash to Florida hospital

OFFICIALS have successfully located the flight recording device of the helicopter that crashed in waters off Abaco on Thursday, killing all seven people on board including American coal magnate billionaire Chris Cline. 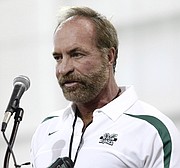 Bahamas Air Accident Investigation Department (AAID) Chief Investigator Delvin Major said the August SPA helicopter’s “black box” has been recovered and is heading to the National Transportation Safety Board in Washington, DC, for a read-out and further analysis.

An update from the AAID’s website said the debris from the ill-fated helicopter has been salvaged and is en route to Florida. Once there, the helicopter will be transported to a “secure facility” for further analysis.

Friends Brittney Searson (left), Delaney Wykle (centre), Kameron Cline (right) and Jill Clark (below) all died when the helicopter they were in crashed into the sea last Thursday.

Following confirmation of the complete craft at the facility, analysis and further documentation inclusive of sampling and the removal of certain parts and/or components will occur. Those parts will then be sent to other facilities as needed for further analysis under “more controlled conditions,” the AAID’s website said.

Thus, Mr Major said officials won’t know exactly what went wrong on Thursday “for some time”. The AAID’s website said it is still “too early” to determine the causes of contributing factors in the accident. However, it said as more information is gathered it will be “released as appropriate”.

The bodies of the crash victims were transferred onto a Bahamasair plane in Grand Bahama on Friday.

Cline, a 60-year-old American coal tycoon, his 22-year-old daughter Kameron and five other people, including the pilot, were on board the helicopter, registration number N32CC, that departed Big Grand Cay in the Abacos at around 2am for Fort Lauderdale to take one of the guests to hospital for an unspecified medical emergency.

It is suspected the chopper crashed minutes after takeoff.

It wasn’t until 12 hours later, however, at around 2.53pm on Thursday, July 4, that the helicopter was reported missing. After the aircraft was reported overdue, search and rescue efforts were immediately launched. The helicopter was later discovered submerged in 16 feet of water about two miles off Grand Cay, Abaco, where Cline owned a private cay.

The tragedy drew widespread tributes for Cline throughout the US, including from President Donald Trump who tweeted on Friday: “My deepest sympathies go out to the family and friends of great businessman and energy expert Chris Cline, his wonderful daughter, Kameron, and their friends, on the tragic accident which took place in the Bahamas.”

In addition to Cline and his daughter Kameron, the other five persons on board died. They were Brittney Layne Searson of Palm Beach, Florida; Jillian Nicole Clarke of Los Angeles, California; David Jude of Kentucky; Delaney Wykle of Washington, DC; and the pilot, Geoffrey Lee Painter of Barnestaple, United Kingdom.

According to an Associated Press report, Ms Cline and Ms Wykle were childhood best friends. Wykle had recently graduated from West Virginia University with a nursing degree, and had travelled to the Bahamas to be with her friend.

“She passed her (nursing) boards on Tuesday,” her father Paul Wykle said. “And died on Thursday.”

Ms Cline, Searson, 21, and Clark, 22, were also friends and were graduated from Louisiana State University (LSU) in May. Searson was also Ms Cline’s classmate at the Benjamin School in Palm Beach, Florida.

According to a report quoting her mother Kimberly Searson, her daughter was “a leader, strong, smart girl, beautiful” who travelled regularly with the Cline family.

The Benjamin School described Ms Kline and Ms Searson as “caring and humble students.” Steven Anderson, a social studies teacher, said in a statement the pair were “inseparable, just terrific.”

Ms Clarke was remembered as a star volleyball player at Mount Carmel Academy in New Orleans.

All three were sorority sisters at Phi Mu, which held a candlelight vigil for them on Saturday.

Cline was said to be an avid risk-taker, who owned several passenger jets, a 160-foot yacht named Mine Games, and had installed a go-cart track and 200-foot waterslide at his house in Beckley. He is survived by children Tanner, Logan, and Candace; and brothers Greg and Kenneth.

When news of the tragedy broke Cline’s older brother Greg Cline told reporters: “I still can’t believe it. It’s like a dream. ... We were so close. All of us were.”

Greg Cline said his brother was a philanthropist who built orphanages in Haiti, donated $8.5 million to Marshall University and gave $5 million to West Virginia University. He also developed a sports centre in his father’s name in Beckley, the southern West Virginia city their family called home and where Chris Cline will be interred.

Greg Cline said his brother “gave to anybody that needed anything. ... He always knew what to do.”

The remains of the victims were taken by boat from Abaco to Grand Bahama early Friday morning by officers of the Royal Bahamas Police Force Marine Division.

The vessel arrived at about 12.39am at the Police Marine Base in Lucaya, near the Grand Bahama Sailing Club. Morticians from three local funeral businesses removed the bodies, which were placed in five hearses and transferred to the Rand Memorial Hospital morgue.

At about 2.45pm on Friday, the bodies of the victims were put on a Bahamasair jet flight to Nassau.

AAID will provide updates on its website at www.baaid.org, on its Twitter page at bahamas_aaid, and through its WhatsApp Chat.

U.S. news outlet information below is being posted here to compensate for The Tribune's failure to say much about Geoffrey Painter and David Jude:

"The operator of a Palm Beach Gardens helicopter service was piloting the multi-million-dollar chopper that crashed in the Bahamas on July 4, killing himself and six others, including coal billionaire and part-time northern Palm Beach County resident Christopher Cline, authorities said Saturday.

Geoffrey Painter, 52, and David Jude, 57, also killed in the crash, operated Cloud 9 Helicopters, based at the North County Airport, according to the company’s web page and state corporate records.

Bahamian authorities initially had suggested Jude, a West Virginia and Juno Beach resident who is one of Cline’s regular corporate pilots, was at the controls of the Agusta AW139 that dropped into shallow waters near Grand Cay, about 115 miles northeast of Palm Beach, and that the seventh person was an unidentified “Florida mechanic.”

But on Saturday, the Royal Bahamas Police Force posted a list of all seven victims, and listed Painter as the pilot."

The weather between Abaco and Florida changes very rapidly. If it was a factor. Sometimes the heavy rains reduces visibility to zero in an instant.