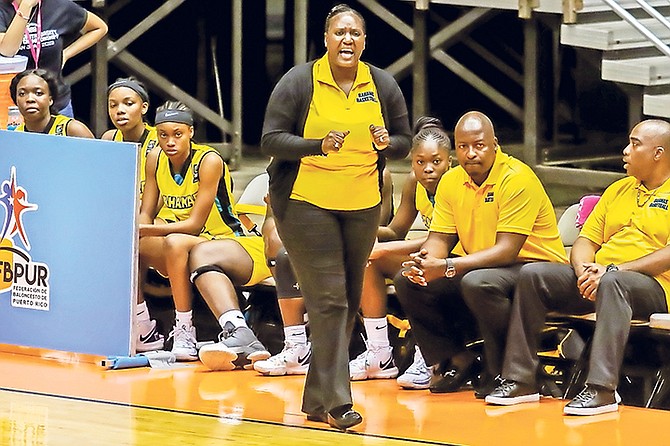 Team Bahamas head coach Varel Clarke-Davis shouts from the sidelines yesterday during their 83-43 loss to Puerto Rico in the Centrobasket Under-17 Championships for Women at the Roberto Clemente Coliseum in San Juan, Puerto Rico.

The Bahamas was on the opposite end of a lopsided result on day two of the Centrobasket Under-17 Championships for Women.

The team suffered an 83-43 loss to Puerto Rico in their second game of the group stage yesterday at the Roberto Clemente Coliseum in San Juan, Puerto Rico.

Puerto Rico limited the Bahamas to just a single field goal and seven points in the first quarter as they took an early 17-7 lead.

Puerto Rico had their highest scoring period in the second when they outscored the Bahamas 23-12 and took a 40-19 lead into the half.

The Bahamas was again held to single digits in the third and managed just eight points on three field goals as Puerto Rico took a 62-27 lead into the fourth.

The Bahamas continues in the group stage today when they face Guatemala at 3:15pm local time with second place in Group B on the line.

“Today our ladies came out very nervous. I thought after the first game we missed a lot of easy shots, particularly in the first half, but we dug a hole for ourselves. We tried to fight back as much as we could but they were able to extend the lead,” said head coach Varel Clarke-Davis.

“We have to revisit this and go back to see what adjustments we can make. Our job is just to win the game ahead of us, hopefully, we will still be in a good position in the standings and have a good chance to make it to the medal round.”