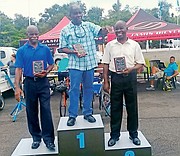 Jeff, Lawrence and Franklyn Burnside are pictured from left to right.

THEY were hailed as a group of brothers who collectively helped to change the scope of cycling on the local and international scene.

During the Bahamas Cycling Federation's 46th National Cycling Championships, Lawrence, Jeffery, Franklyn and Drexel Burnside were recognised for their accomplishments.

New Providence Cycling Federation president Barron 'Turbo' Musgrove said what the brothers did to help revolutionise the sport back in the 1970s was unheralded and they deserve the recognition.

Federation president Roy Colebrooke made the presentation of plaques to three of the brothers - Lawrence, Jeffery, and Franklyn. Missing was Drexel 'Rex' Burnside, who also was regarded as one of the best administrators in the sport of powerlifting and bodybuilding.

"I feel good. I think it's long overdue," said Jeff, as he represented the brothers in the interview. "It was something that we didn't look forward to because when we got started, it was just for the love of the sport."

Lawrence Burnside, the older of the clan, started competing first in the 1960s and he introduced Jeff to the sport in 1968 and Franklyn followed a year or two later.

While Drexel wasn't as competitive as the others, he made his contribution as an administrator, helping out wherever he could.

"We're just delighted that they have decided to give us our flowers while we are still alive," Jeff said. "I really appreciate it and we want to thank Roy (Colebrooke) and Barron (Musgrove) for what they have done.

"When we got into cycling, we went into it for the love of it. We would go out there every Sunday and ride in races whether there were prizes or not. And then there were times when we told everybody to bring $5 this week as entrance fee and the winner takes all. At the end of the day, whoever won, we went to the Reef Restuarant or McDonald's and we spent it, so everybody went home tired and a belly full when we were done, win, lose or draw."

There have always been arguments around the Burnside family as to who was actually the best cyclist of the crew. Jeff said he felt he was better, but Lawrence would beg to differ that he was. He said Franklyn would even try to make a case that he was.

If there's one factor that leaned towards the achievement for one over the other, both Lawrence and Jeff made it to the Olympic Games in Munich, West Germany in 1972, albeit, they didn't get to finish the road race.

"But I think they all knew that I was the better of the crew. That was why I ended up with the nickname 'Sprint King.' Earlyn Williams, a Reporter at The Tribune at the time, gave me that name because of my speed and my sprinting ability."

"I and Franklyn came around when most of those guys were getting off the scene, but they pushed us to the limit,' Jeff recalled. "I can remember one Sunday competing against Deuce Thompson in a race around the island that ended at Southern's Lounge on Blue Hill Road.

"If there was another stronger person in that race, I might have lost because after traveling around the western end of the island, when we got onto Harold Road from there until we got to finish line on Blue Hill Road, Deuce was like a pain to me. Every time he would just keep going. Nobody wanted to go with him, so I had to go for him and bring him back. I was surprised that I even won the race."

Raymond Morley and Cardinal Davis were some of the juniors that followed and took over from the Burnside brothers when they exited the scene.

Before they left, Lawrence reminded everybody that he separated himself from the rest of the Bahamian cyclists as he rode in the 1973 World Championships and a few Commonwealth Games, including in Cali, Colombia where he was the lone representative.

Lawrence, however, called upon the Bahamas Government to do a lot more for cycling because the sport has done a lot for the country and there could be more competitive competing on the international scene if they get more national support.