Face To Face: Felicia Fighting To Help Young Women From Falling Through The Cracks In The System 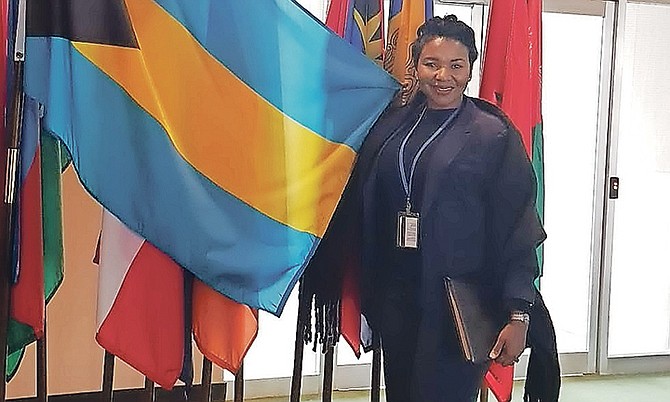 Felicia at the Commission on the Status of Women, United Nations headquarters, New York City.

When Felicia was just 16-years-old, she gave birth to a beautiful baby girl. She knew she was too young and that life would never be the same. She was born in a two-parent home and she considered her life stable until the age of 10, when her parents got divorced.

“From when my parents very dramatic divorce started, it affected me,” Felicia admits. “It was hard on me as a young girl… and very confusing. Verbal abuse, instability and rejection from both sides of my family led me to run away from home. I ran to what gave me a sense of peace even though it was toxic... street life. Eventually, I was bought before the courts and labelled ‘uncontrollable’. After I became a young mother, I struggled to change my life. With no support from my child’s father and lack of support from my family, it was tough. Many days I missed school because I didn’t have the baby items or the financial support I needed. I managed to endure through a series of relationships with older men who came to my relief but then they ended up in abuse, STDs and unwanted pregnancy.”

This is the storyline of hundreds of girls all over the country. For Felicia, this was all of 25 years ago but today in our society the story  is still the same. Knowing that 71 percent of the Bahamian society is made up of single parent homes, that 63 percent are spearheaded by women and that these statistics have been the norm for nearly three generations, Felicia decided to do something about it – she formed Teen Life Skills organisation.

Felicia knows the path to becoming a teen mother is one anyone can take, from any background and any social strata. For her, she was a thriving private school student attending Queen’s College and swimming in the Barracuda swim club. She spent almost all of her primary school life there but in grade six, her parents’ divorce resulted in her having to leave before her final year was complete. She attended Stephen Dillet Primary and after graduation, she returned to Queen’s College for Junior High. However, the instability returned and she only completed one semester before being “bounced around” from school to school including Academia, Government High and LW Young.

Then Felicia fell pregnant. She ended up attending PACE school for pregnant girls. She graduated from that programme and was lucky enough to be able to go back to school. She attended DW Davis where she graduated in 1999. She had always aspired to be a doctor but because of all the bumps in the road, she was not able to focus on her dream and ended up becoming a teen mom instead.

“I tried to do things the right way and seek out a public service that would give me assistance,” she explained. 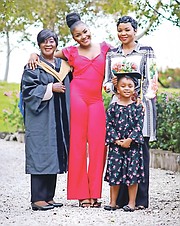 Felicia and her daughters Marrisa and Zuri support her mom, Ivy Campbell, as she received her doctorate degree.

“After about eight weeks of trying, I was denied assistance. They said I didn’t need the services. I was devastated. I refused to go back to the old way of doing things just to make ends meet. I vowed that whenever I got on my feet, I would assist other young mothers fighting to change their outcome. As time went on, I got a job in the hotel with the help of my grandmother. Over the years working in the hospitality industry, I still had the burning desire to further my education. It was very difficult. From the Bahamas Hotel Training College to the College of the Bahamas, I was in and out college life for about 12 years trying to find my niche.”

Fast forward to today, Felicia (nee Campbell) has a Bachelor’s degree in Christian Counselling and a Master’s degree in Organisational Leadership from New Covenant University in Jacksonville, Florida. Her first child was by a “former gang member turned alcoholic”. Today, she has a loving husband, Stephon Carey with whom she had another child.

After the birth of her second child, she looked at her two beautiful daughters and remembered her vow to help others. She started mentoring young girls through the CHANJED mentorship programme. She went on to attend the Ministry of Youth, Sports and Culture’s Youth Leadership Certification Programme. It was then that Felicia says she was “inspired by the Holy Spirit” to start her own programme. After sharing her path to teen pregnancy, her church family at Bahamas Harvest Church, as well as Ministry officials John Darville and Cherrylee Pinder, encouraged her to start an organisation that would “serve the real needs of young parents”. By March of 2018, Teen Life Skills Services (TLS) was born.

“I am passionate about serving young parents, young mothers in particular who are facing gender based violence, poverty, human trafficking or are fighting for a fresh start,” said Felicia.

“I believe that all youth matter - that includes young parents. Despite the negative risk factors young parents face, once the right support is made available to them, they can succeed. My aim is to serve those who have fallen through the cracks and to remind them of Jeremiah 29… they have a purpose. They can still dream big knowing they have support on their fresh-start journey.”

Felicia knows teen parents need all the support they can get. Even now, 25 years after becoming a teen mom, there are still people in her life who will remind her of how she lived her life back then. She alluded to the United Nation’s 2013 spotlight on “motherhood in childhood” and the call for governments, churches, organisations and individuals to put mechanisms in place to support young parents. She also pointed out the UN’s Convention on the Rights of the Child and the mandate for children to be afforded proper health and education services. TLS, she said, can play an important role in Bahamian society, advocating for these young parents who face “falling through the cracks”.

“In the last five years, I have noticed that a lot of mothers under the age of 24 have repeated pregnancies,” she said.

“They are often in violent situations. They and their children are at risk of injury and even death. We need to empower our young mothers to become more independent, literate and socially well-rounded. They need to know that even though they may have been put in a situation such as young parenthood, either voluntarily or involuntarily (in the case of rape, abuse and molestation) that they rise above the challenge. As women we need to impart knowledge to other young women going through similar situations and help avoid such tragedy and trauma. This is why is started TLS.

“Teen pregnancy is nothing new. Teen pregnancy is currently down a bit, but I believe opinion abortions are on the rise. Young mothers are subjecting themselves to this because they don’t want to face the stigma and without support, men will abuse them even more. A lot of young persons don’t use family planning. They need to know their rights… their sexual rights and we need to build awareness, letting them know they have support if they go down the road of teen pregnancy.”

Although she cannot confirm it, Felicia believes abortions are on the rise because there is a rise in HIV and STD statistics in young Bahamians, but there are fewer pregnancies or in some cases, the pregnancies are not coming to full term.

The age of sexual consent, she said, should be raised from 16 to 18: “A 16-year-old still cannot go to clinic to receive any type of medical attention unless parents are there. So it doesn’t make sense that they could give consent for sex but cannot go and get medical assistance they need such as birth control without their parents being present.”

TLS is seeking to change that by educating young parents, particularly those between the ages of 14 and 25. Felicia said it was terrifying when she first started TLS, because it meant exposing her past. However, she has found it made her more relatable to young mothers.

In the past years and three months, TLS has assisted 70 young parents and 95 percent of them are young mothers. TLS has hosted several Community Cares initiatives in Nassau and has worked with the PACE school in Grand Bahama. Her non-governmental organisation (NGO) has grown to include a number of dedicated volunteers who have helped with providing baby items, counselling and moral support to mothers enrolled in skill building programmes. TLS has made such an impact that the NGO received the 2018/2019 Minister’s Cup for Youth Organisational Excellence. Felicia has even travelled to New York to the UN headquarters and has represented the Bahamas with a contingent from the Ministry of Social Services at the Commission on the Status of Women, where she sat in sessions which focused on single mothers.

“Another reason I started TLS Services is to be the person I needed 25 years ago,” Felicia shared.

TLS is currently hosting a “Baby and Back to School Drive” to raise funds and goods for young parents. Pampers and wipes, gently used baby clothing and school supplies are being collected. For more information, email teenlifeskills242@gmail.com or call Felicia Campbell-Carey at 456-4071.

Congratulations on overcoming the struggles of teen pregnancy and abuse. You will be an inspiration to many young ladies.

Please help others, the scourge continues and the pit of dependency without support continues. A young grandmother must sweat to earn her living - her daughter barely 20 years of age like so many others without a known father for her four month now being along in an unwanted but there it is pregnancy, must bear another sad and unwanted child? repetition of disdain, ignorance and disrespect at the financial doors of those of us who can barely afford our own planned and married financial planning, and which other burden can be well outside the scope of reality if charged with the rearing, schooling, feeding and schooling of another's recklessly conceived baby