Business Bites: Time To Pull The Plug On Bahamasair

Efficient reception of international air travellers is clearly key to our tourism and is well performed by our Lynden Pindling International Airport, a government-owned public utility not committed to the profits of an investor-owned enterprise. But two commercial companies also play a major role: the “fixed based operations”, or FBOs, that cater to private and corporate aviation. Based at opposite ends of the airport but using its runways, Odyssey and Jet Aviation are intensely competitive firms that attract their own loyal customers, as can be seen by the sleek jets and prop-driven aircraft gracing their hangars and taxi-ways. Both are run by Bahamians, one with the support of US industrial giant General Dynamics, and provide high-grade employment in the local market.

FBOs are the choice of corporate travel departments as well as a growing number of individuals who can afford personal air service. While they will never replace scheduled airlines, FBOs attract any fliers who can afford to avoid the inevitable cattle-car conditions and rigid scheduling of our major carriers American, Jet Blue and Delta. There is enough wealth around the world to make private aviation a booming business, with FBO’s now found at all international airports, including several in the Caribbean.

Unfortunately, our own airlines do not present such a rosy picture. Government-owned Bahamasair should have been put out of its misery years ago, as it struggles to serve a few US destinations and most airports scattered across our challenging archipelago, each year racking up a loss that demands an annual subsidy from the Bahamian people of about $20 million, paying for chronic featherbedding and lax business practices.

Bahamasair only exists because of our politicians’ conviction that our sovereign reputation demands a “national” flag carrier. Fine, we can have one - but it should be owned by our private sector, not by the state. We have plenty of well trained Bahamian pilots, air crew, mechanics and terminal staff, working not only with Bahamasair but also with local companies like Western Air Services , Sky Bahamas, Pineapple Air and many small charter companies.

Rather than propping up a government company, our ministers should devote their energies to organising all this local expertise into creating a major investor-owned enterprise. Western Air provides a good example. Organised by a fully-certified Bahamian pilot and led by him and his family, Western has expanded from its base in San Andros to operate throughout the country, with a major centre in Freeport and careful additions to its aircraft fleet.

Although it will take time and careful planning, there is ample opportunity to unravel the present Bahamasair and replace it with the best of our extensive private abilities. We can seek consultation from American on how they merged with US Air, or from Delta how it acquired Northwest. But the final result should be a non-Government airline owned, staffed by qualified Bahamians, serving the public interest under a regime reviewed by URCA, with all technical safety issues continued under regulation by our aviation authorities.

Bastian can afford to wait on gradual growth for Titan Funds

The distinguished long-time head of our Securities Commission, Hillary Devaux, was clearly struggling for the right words in his new role as Chairman of Investar Securities, manager of the current offering of the two Titan Funds, promoted by protean entrepreneur Sebas Bastian.

While calling the demand “fairly substantial” Mr. Deveaux disclosed that only about 400 subscribers bought over $750,000 of shares, most of which were in the Managed Fund since sales of the Fixed Income Fund had “not been impressive”. The month-long offering would be extended for 16 days to allow for intensive marketing In The Family Islands, where he claimed strong demand was found.

We do not underestimate the difficulty in launching a new fund in our small capital markets, and we welcome any effort to extend securities ownership among less affluent Bahamians, but the hard truth is that Titan Funds face tough competition. The Fixed Income Fund hardly differs from the Prime Income Fund managed by another firm, with $144 million of shares already outstanding after being marketed since 2012. They both invest mainly in Government bonds and you cannot slice this apple in different ways.

The Managed Fund has more interesting objectives in equity investments, but must face the other firm’s competing Targeted Equity Fund, $21 million in present size. The Managed Fund has one unique feature: it is authorised to invest in Island Luck, the country’s dominant gaming house controlled by Mr Bastian, which is believed to be very profitable. But Island Luck has not issued any financial statements to verify this status, so investors must rely on speculation and hearsay.

Mr Bastian is a cool customer who is probably not losing any sleep over Titan Funds’ lingering take-off. He has plenty of other successful ventures in his portfolio and can afford to await the gradual growth of his new experiment in fund distribution and management. Eventually, he may decide to “go public” with Island Luck, via an IPO revealing full information.

Is there anybody out there with a Big Idea?

Business and politics are never far apart, so I hope my readers will excuse my bloviating about the political world, both in the US and here.

Two weeks ago 20 Democratic candidates for the presidency debated over two days in Miami. It was beyond endurance to sit by my TV screen for all four hours, but I saw enough to get the gist. My first reaction: it’s amazing - and kind of wonderful - that so many smart people (and more who have declared) have signed up for this gruelling run, since most of them must know they are no-hopers without a chance of being nominated. For months they will be dashing to meet impossible schedules; divorced from family and friends; forced to think up smart answers for repetitive media; pilloried from extremists of left and right, black and white; forever short of sleep or solid meals. 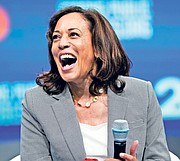 Even the five probable leaders – Biden, Sanders, Elizabeth Warren, Pete Buttigieg and current favourite Kamala Harris, pictured, — have no assurance they will make it to the top. Certainly all the candidates share a good slice of personal ambition in running, with hopes for fame and fortune with a new book or job. But let’s also credit them with idealism, a belief their ideas are worth a fight for the good of their country, win or lose.

Contrast that with The Bahamas. Here we are less than three years from the next election, and I can see nobody who has stuck his, or her, head up to take shots as a new political leader. Surely there must be rumblings in the FNM that the Prime Minister’s lack of personal charisma will turn away our emotional voters, particularly now that he has lost the support of Brent Symonette, stalwart to a large faction of the party. And surely the PLP cannot contemplate leadership by yesterday’s amiable lap-dog Brave Davis, author of so many mishaps like “privatising” BEC. Is ambitious, articulate newcomer MP Chester Cooper quietly planning a coup? Is another Branville McCartney out there in the political wilderness, mulling the long shot of creating a third-party like the DNA to challenge the status quo?

All is still quiet, but I predict that in early 2000 the political pot will begin to boil, as Bahamians are not prone to keeping their mouths shut.

Bahamasair would be excellent if it didnt have the jets. They cost too much. Ive been saying over 20 years, get rid of the jets. But we prefer to "look cool" while being real fool.

However badly we may need tourism and however closely physically we may exist next to another country, I cannot help but deplore the sucking up to that other country as if their national affairs were our own.

The Bahamas is an independent sovereign country which fought for its independence and even has its own constitution - not the warped, distorted, interpreted-500-ways self-issued freely-made-up Constitution of the USA.

The Bahamas should be making up its own mind about its own future and the future of its own national possessions, not thrashing them through a roll call of political hacks and their 4-year political mash cycle to emerge with a decision that Bahamians will be required to live with.

Please tell who did we fight against? which fought for its independence" Bahamians have never fought against anyone ever, except for those few brave men who joined the British armed forces during the two world wars. Where do people learn this stuff?

The thrust of Coulson's justification for pulling the plug on Bahamasair is that "only the growing number of individuals who can afford" costlier carriers like Delta, American and JetBlue, or personal air services, should have the privilege of being able to travel by air. This guy is now so senile that he has lost touch with reality. He's lucky to be among "the growing number of individuals who can afford personal air services". The vast majority of Bahamians do share his luck but he truly seems oblivious to that fact. What a joke!