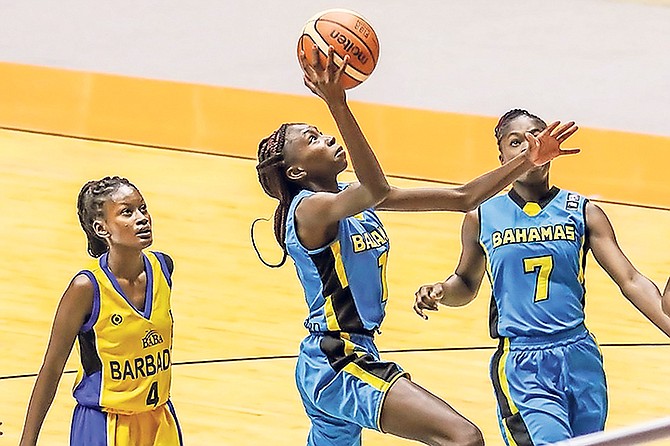 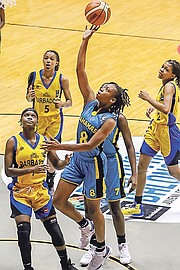 AFTER a heartbreaking loss to eliminate them from medal contention, Team Bahamas responded yesterday with their most lopsided win of the tournament.

The Bahamas defeated Barbados 83-41 in the reclassification round yesterday at the Roberto Clemente Stadium in San Juan, Puerto Rico.

With the win, they will advance to face Costa Rica today at 3:15pm local time for fifth place. 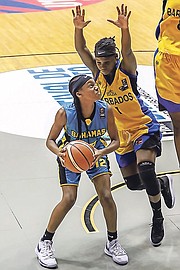 The Bahamas had their best shooting performance of the tournament at 43 per cent (37-87) while they limited Barbados to just 26 per cent.

Defensively, they limited Barbados to single digit scoring in each of the first three quarters en route to the blowout win. They took a 20-7 lead at the end of the first, 34-11 lead at the half and 61-19 into the fourth quarter.

Danae Malcolm came off the bench to finish with team Bahamas for her best game of the tournament thus far.

“This game we were more patient, we did more on defence, kept our hands up and did things fundamentally. We executed our offence, we were patient, moved the ball around and we made shots. I think we came together, our demeanour was better, we had better chemistry and we want to have that same momentum,” she said.

“In the locker room we spoke about pride and we were excited to get the win on Independence Day, it means a lot to us.”

Team co-captain Karolyn Baptiste said: “We moved the ball around better and took advantage of open looks. We want to keep that momentum going into our last game, execute on defence and our offence should flow.”

With a trip to the semi-finals on the line, the Bahamas suffered a 65-64 loss to Guatemala. The Bahamas had a 64-63 lead with 12 seconds left to play.

Guatemala inbounded the ball to Mariana Escobar who drove the lane and drew a foul on Moultrie with 7.6 seconds left in regulation.

Escobar made both to give Guatemala the lead. The Bahamas was able to go the full length of the floor, but Baptiste’s runner missed off the back rim as time expired.

“I told them we would bounce back from this and we still have to go after the fifth position. I keep trying to preach to them to keep it simple and fundamentally sound. I think they got it at this late stage. They looked like a more cohesive unit against Barbados.

“Against Guatemala, we didn’t play good defence at all. We just have to come out and secure this fifth spot,” Davis said. “We just thought we wanted to come out and give the Bahamian people something to be proud of on Independence. We sang the national anthem with an extra sense of pride.”

The Bahamas is in Group B with Puerto Rico, Guatemala and El Salvador. Group A includes Dominican Republic, Costa Rica, Barbados and Mexico. The top three teams in the tournament will qualify for the FIBA Under-18 Americas Championship 2020.