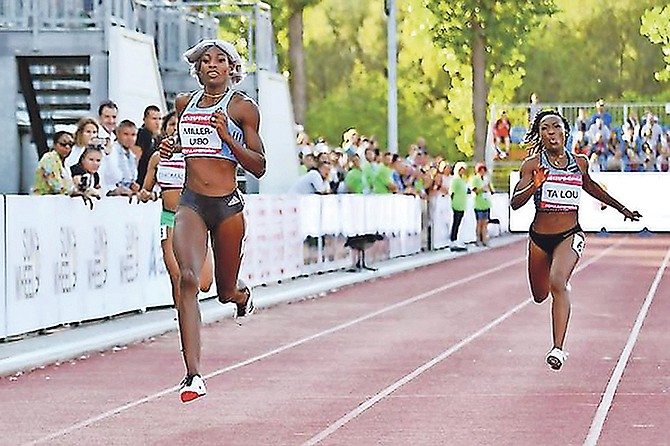 CRUISE CONTROL: Shaunae Miller-Uibo (left) wins the 200 metres at the Hungarian Grand Prix on Tuesday. In a season’s best performance, she set another meet record.

While Shaunae Miller-Uibo, with her silver hairstyle, inked her name on another meet record in producing a season’s best performance, Steven Gardiner fell shy of eclipsing his own mark as they were both victorious in their respective events in Szekesfehervar, Hungary.

On the eve of Independence Day on Tuesday, Miller-Uibo sprinted around her first half-lap race for 2019 to win the women’s 200 metres in 22.18 seconds at the Gyulai Istvan Memorial, a Hungarian Grand Prix meet.

As the 2016 Olympic champion pulled away from the field, she went on to erase the meet record of 22.26 that was posted by Jamaica’s Veronica Campbell-Brown in 2011.

In the process, the six-foot, one-inch Miller-Uibo left arch-rivals Marie-Josee Ta Lou and Jenna Prandini trying to catch her. Ta Lou of the Ivory Coast came in second in 22.76 and American Prandini was third in 22.88.

Although she ran away from the field, the 25-year-old Miller-Uibo was just off the world leading time of 22.00 that was produced by Jamaican world champion Elaine Thompson at the Jamaica National Trials in Kingston, Jamaica, on June 23.

Miller-Uibo also tops the 400m list with her 49.05 she established on April 27 in Gainesville, Florida. She is followed closely by Salwa Eid Naser of Bahrain with 49.17 on Friday in Lausanne, Switzerland.

While Miller-Uibo was enjoying her debut in the half-lap race in Szekesfehervar, Naser took care of business in the one-lapper in her winning time of 50.13 over American Phyllis Francis, who did 51.24 and Jamaican Stephenie Ann McPherson (51.76).

Miller-Uibo, however, still holds the meet record of 49.54 that she recorded in her victory in the one-lapper last year. She now holds both the 200/400 records at the meet.

Gardiner, on the other hand, was almost as equally impressive over his one-lap victory.

In securing the win, the lanky, 6-2 Abaco native came across the line well ahead of his American counterparts as Tyrell Richard got second in 45.59 and Vernon Norwood was third in 45.62.

The 23-year-old Gardiner’s time in Hungary now has him at No.5 on the performance list for 2019.

American Noah Lyles leads 10 other competitors under 20 seconds with his world-leading time of 19.50 done in Lausanne, Switzerland on Friday. American world indoor champion Christian Coleman, in just his second 200m race since June 2017, crossed the line in a meet record of 19.91, well ahead of world champion Ramil Guliyev (20.23) and Canada’s Aaron Brown (20.24).

Donald Thomas also competed in the meet on Tuesday, but he didn’t post a mark in the men’s high jump that was won by Ilya Ivanyuk, an authorised neutral athlete from Russia, who cleared a world leading height of 2.33 metres or 7-feet, 7 3/4-inches.

Coming off her victory in the women’s 100m at the Star Athletics Sprint Series in Montverde, Florida on Friday in 11.11, Tynia Gaither showed up at the 2019 Spitzen Leichtathlerik in Lucerne, Switzerland on Tuesday for the sprint double. In the straight-away race, she held on for fifth place in 11.29 in the final after placing third in the second of two heats of the 100 in 11.35 for the fourth fastest time.

Gina Luckenkemper of Germany took the final title in 11.20.

From the meet in Montverde, Gaither is now tied with six other competitors in the 100m and her time in the 200m in Lucerne has her pegged at No.12 with American Gabrielle Thomas after she won the half-lap in race in Lausanne on Friday.

Elaine Thompson and Shelly-Ann Fraser-Pryce share the top of the 100m leaderboard after their photo finish at the Jamaica National Trials in Kingston, Jamaica, on June 21.

The Bahamian athletes are all gearing up for the Bahamas Association of Athletic Associations’ National Championships, scheduled for the weekend of July 26-28 at the Grand Bahama Sports Complex.

It’s the same weekend that the United States will hold their national championships.

From the nationals, athletes will qualify for team selection to the International Amateur Athletic Federation (IAAF) World Championships in Doha, Qatar, September 28 to October 6.