Stateside: Hail To The Chief (Well, Not From Everybody) 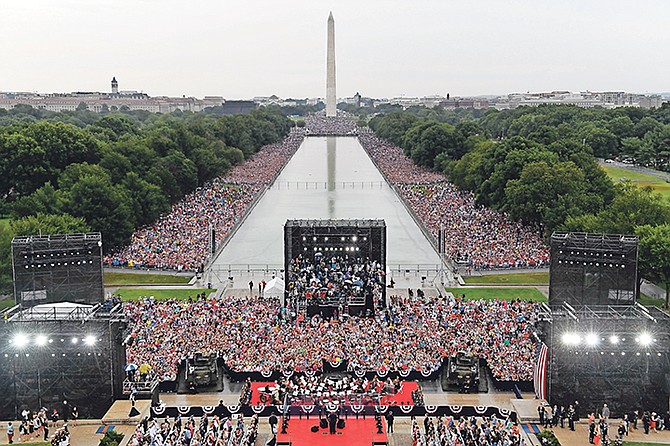 Two nations that are linked by several factors celebrated their independence days last week, one day apart. A comparison of the two is intriguing.

The president of one nation last week sat high above the impressive Independence Day military parade on display in the streets of his nation’s capital. Saluting and offering praise to the various military units who in turn reciprocated with their discipline and strength, the leader smiled and nodded and gestured his respect and support for the military personnel and hardware which was intended to keep the country strong and independent against any foreign challenge.

In his stirring speech in tribute to his military, the president praised their fortitude and loyalty. Implicit in the lengthy and well-rehearsed display was the military’s fealty to their Commander-in-Chief.

Elsewhere in that same capital city, demonstrations were held by opposition politicians who challenged the fundamental legitimacy of this president. There were persistent claims the most recent election had not truly reflected the will of the people. But the focus of the nation, as had been intended, was on the president and the nation’s military forces. The value and power of presidential incumbency was rarely on such obvious display. By most accounts, the celebratory pageantry surrounding Venezuela’s 208th Independence Day last Friday accomplished many of its goals for President Nicolas Maduro, and may have possibly strengthened his hand against the many in his country and abroad who wish him gone from office.

In the other nation, orating in the rain in Washington DC while praising General George Washington’s Revolutionary War efforts to secure airfields over 100 years before man’s first flight, Donald Trump must have been envious of his Venezuelan rival. The American president, reportedly lusting for a full-blown military parade over which to preside ever since he witnessed such an event two years ago in Europe, later blamed his phenomenal airfield miscue on his teleprompter.

But there was no massive military demonstration in Washington on America’s 243rd birthday. Instead, there was widespread criticism of Trump’s effort to insert himself into a traditionally non-partisan national day of celebration. Despite his election and now 30-month tenure, Trump remains for many a profoundly illegitimate Commander-in-Chief. And while the last American president to see any wartime action left office nearly 30 years ago, Trump’s conspicuous efforts to affiliate himself with the American military seem especially hypocritical in view of his dubious evasion of the military draft during the Vietnam War.

Maduro, whose Venezuela is strongly linked to the US in areas ranging from oil to baseball, rose to prominence through his nation’s military. Now he is a pariah in most parts of the world except Russia, China, Nicaragua and Cuba. Millions of his citizens have fled his ruinous regime. Among those committed most strongly to his departure is the Trump administration in Washington.

Two Western Hemisphere presidents were celebrating their nation’s independence days. They may have approached their celebrations with similar aspirations, but the outcomes were, perhaps tellingly, quite different. 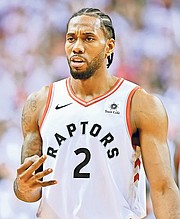 Kawai Leonard surprised the sporting world by signing for the LA Clippers.

All eyes on Los Angeles as trades go up a notch

Maybe you are living on the beach with no internet access. But if you are even a casual NBA fan, you know by now that Toronto Raptors championship MVP Kawai Leonard surprised most of the sporting world by agreeing to sign a new contract with the Los Angeles Clippers. A precondition for his decision was apparently for the Clippers to acquire by trade All-Star Paul George from Oklahoma City, which the Clips duly accomplished.

Now we can look forward to an intra-city NBA rivalry never before seen in the world’s top basketball league.

The Lakers, with Anthony Davis and LeBron James, were all set to be the toast of Los Angeles. No more.

The perennially second-best Clippers, who historically have counted very few of the LA glitterati among their fans, have jumped emphatically into first place in Southern California pro hoops. This is because they, unlike the Lakers, already have a decent playoff team in place. Most of what they traded to Oklahoma City was a bushel basket full of future draft picks. The Thunder, who lost Kevin Durant just three years ago before cleverly trading for George to try to fill that gap, now must face rebuilding again around mercurial Russell Westbrook. And rumours are already circulating that the Thunder may now deal Westbrook, perhaps to the Miami Heat.

Now that one of the most amazing, unpredictable and interesting free agency periods in NBA history is itself history, it’s worth a look back at the league’s first-ever free agent. Sports Illustrated magazine caught up with Tom Chambers at a cabin in the Utah mountains and got his response to the sheer audacity of the past week or so. Chambers, by the way, has to go outside to stand by the water tank on his property to get any internet access.

Chambers, a 6’ 10” power forward who played collegiately at the University of Kentucky and then in the pros for six years with the then-San Diego Clippers and then-Seattle Supersonics (the predecessors of the present-day LA Clippers and Oklahoma City Thunder), became a free agent almost exactly 31 years ago as the result of a new NBA collective bargaining agreement agreed after the 1987 season. Chambers signed with the Phoenix Suns and went on to make four All-Star teams and score 20,000 points in a distinguished NBA career.

Of the frenzy just concluded, Chambers said “it’s like nothing we’ve ever seen before.”

three months ago in this space, we discussed the cases of Jeffrey Epstein and Robert Kraft, both of whom were under scrutiny by American law enforcement officials. There are now current updates for both men - and their lives have turned in significantly different directions.

Epstein is the multimillionaire playboy against whom several scurrilous sex charges were reduced by the US Attorney’s office in Miami then under the direction of current Labour Secretary Alex Acosta. The charges were limited by Acosta’s office to a simple plea deal with a light jail sentence. But Epstein is now being charged with human trafficking, sex with underage minors, and other offences by the US Attorney’s office in the Southern District of New York.

Epstein, whose friendship with Donald Trump seemed to be based at least partly on their rapacious interest in women and celebrating their wealth, has been all over the news lately. The story has sex and politics all through it. Bill Clinton, another one-time acquaintance, has sprinted in the other direction from any knowledge of Epstein’s alleged crimes. The former president may not be the only one racing away from Epstein, as more of his sins and friends are revealed.

Acosta, meanwhile, is the latest Trump cabinet member to take a seat in Washington’s political dunking stool. Democrats will continue to take shots at him until he resigns, is forced from office, or is saved by the distraction of an even greater scandal from some presently unknown source. Epstein, though, seems headed for a rather stern reckoning from the grinding wheels of the American criminal justice system.

As for Kraft, the 78-year-old New England Patriots owner, widower and famous friend of Donald Trump had largely stayed out of the news until Monday. Kraft, charged in a Palm Beach County, Florida prostitution case five months ago, hired lawyers who were able to keep out of the public eye a reportedly incriminating security tape from the spa facility where his solicitation of sex for pay allegedly occurred. The case is making its way through the justice system.

Kraft’s alleged offences appear to be significantly less serious than Epstein’s, but the six-time NFL champion owner seems to have suffered little interruption to his gilded life.

On Monday, there was Kraft, pictured at a table with several dignitaries at a dinner at the U.S. Treasury Department in honour of the Emir of Qatar. Among those dignitaries was Trump himself and International Monetary Fund managing director Christine Lagarde. Time will tell if Kraft manages to evade further legal discomfort.