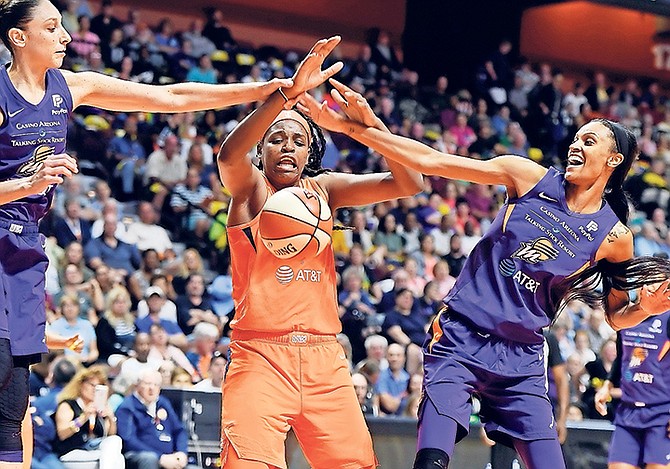 JONQUEL Jones continues to make history and receive recognition for her elite play in the WNBA this season.

Jones was awarded WNBA Eastern Conference Player of the Week for the fourth time this season. She averaged 16.7 points and 9.3 rebounds per game while shooting 47.5 from the field in a pair of wins for the Sun.

On Sunday in Indiana, she had a season-high 26 points (11-19) with eight rebounds. It was her third game this season with 20 or more points and the 21st of her career.

On Friday, Jones led the Sun in a 79-64 win over the Phoenix Mercury to snap a season high five-game losing streak. She finished with 13 points and 11 rebounds.

Jones also earned Eastern Conference Player of the Week honours on June 3, June 10 and June 17 this season, becoming the first player in franchise history to receive the honour in three consecutive weeks.

On July 11 she was named a starter for the AT&T WNBA All-Star 2019, her second starting All-Star nod. "It feels good to be back in the All-Star Game," Jones said.

"I'm really excited to be out there and be representing the team with all of these fantastic players. Hopefully I'll also see some of my teammates out there."

The AT&T WNBA All-Star 2019, featuring Team Delle Donne vs. Team Wilson, will be played on Saturday, July 27 at the Mandalay Bay Events Center in Las Vegas and televised live by ABC at 3:30pm ET.

Jones was ranked at No.7 on the fan voting for the frontcourt, but No.2 behind Delle Donne by the media.

She will be making her second All-Star appearance after her debut in 2017 when she earned WNBA Most Improved Player honours.

In 2017, she was named to the All-WNBA Second Team after she averaged a double double, set the league's single season rebounds total, was named an All-Star and was awarded as the WNBA's Most Improved Player.

Last season, Jones played 20.5 minutes per game as a reserve and started only 16 of the 34 regular-season games. Jones was still named the 2018 WNBA Sixth Woman of the Year, earning the honour as the league's top reserve for the first time in her three-year career. She averaged 11.8 points, 5.5 rebounds, a career-high 1.7 assists and 1.24 blocked shots per game last season. She tied for ninth in the WNBA in blocks and ranked fifth in field goal percentage (55.0) and second in three-point field goal percentage (46.7).

With 50 three-pointers made, Jones has surpassed her total from the previous two seasons put together (36).